I came across this image through my feed.

We are all sending support to those in Lac Mégantic, Quebec who today are in need of some healing of their own. ‎#healingwalk

"An explosion ripped through a small Quebec town early Saturday, destroying dozens of buildings and triggering a large-scale evacuation and search for missing residents after a train carrying crude oil derailed and caught fire."

"local media has reported as many as 60 residents missing and up to 30 buildings destroyed."

"A spokeswoman for the provincial police force, the Surete du Quebec, Aurelie Guindon, said about 1,000 residents have been evacuated."

"Oil has leaked into the town's namesake lake and a nearby river."

**"A large but undetermined amount of fuel spilled into the Chaudiere River." One person dead, others reported missing after explosions in Quebec | Globalnews.ca 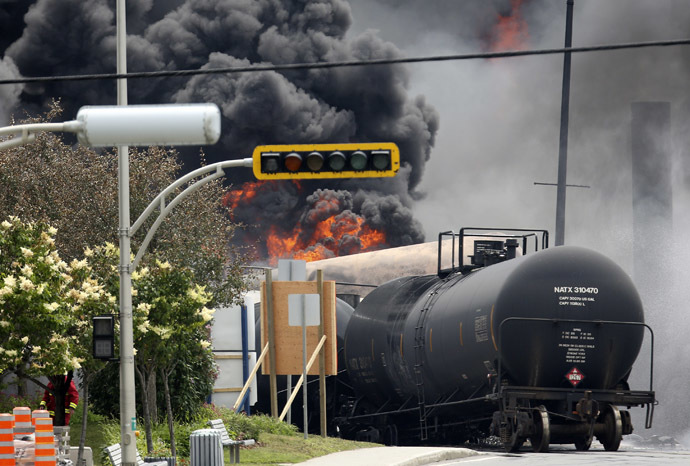 the train was on fire before it derailed.
sounds like the train was ' parked ' by one conductor who was at the end of his shift. before the second conductor could board the train, the train was already mobile. brakes failed ? someone released the brakes ?

so the media are saying it was not remote controlled...but this guy says different.
Robert E Campbell III | LinkedIn
H

is this the reason gas went up 2 cents? thank you Quebec!!

Over the last six months, MMA has almost doubled its number of freight trains carrying the remote controls so that almost half now have one crewmember instead of two. Within three years, the Hermon-based railroad will likely have one engineer or conductor on virtually all of its trains, President and Chief Executive Officer Robert Grindrod said.

“Down on the south end of our area, we are doing all the work with one guy on the train,” Grindrod said Friday. “North of Millinocket we get help [with switching cars] with assistance from other people we have out there.

“We did not have the full technical capabilities, the remote control equipment, to do it sooner,” he said, “and obviously if you are running two men on a crew and switch to one man, you’re saving 50 percent of your labor component.”

The move isn’t winning universal acclaim. One Pan Am Railways engineer, Jarod Briggs of Millinocket, said he was among several former MMA workers who left the rail service over the last few years because of the changeover, which they believe is unsafe.

“So much could happen in a 12-hour shift on one of these trains, such as a washed-out track, downed trees or mechanical failure,” Briggs said Friday. “What if the engineer onboard were to encounter a medical problem? Who is going to know about it?

“If there is a fire engine or an ambulance needing to get by a train or an [activated] crossing when that happens, it could take hours,” he added.

Partially in response to remote-control systems, the state of Wisconsin in 1997 passed a law requiring two-man crews aboard all railroad locomotives, Briggs said.

In Maine, one-man train crews are not illegal and have been in operation for several years, said Mark Latti, spokesman for the Maine Department of Transportation.

The Federal Railroad Administration, which monitors rail-service operations and safety nationwide, in 2009 developed a system to monitor and control mechanical components on railroad freight cars from the safety of the locomotive cab, according to the fra.dot.gov website.

The project’s main objective was to improve railroad safety and efficiency by using advanced technologies to monitor and control components, as well as improve crew safety and operational efficiency during switching operations, the site states.

However, railroad worker injury rates for radio-controlled locomotive operations were 6.58 per million switching miles compared to 9.54 for conventional operations, a 2006 Federal Railroad Administration report to Congress on radio-controlled locomotives concluded. The study focused almost exclusively on railroad switch-ing yards, as that is where the majority of accidents occur.

“Our view is that the operation of RCLs is as safe as conventional rail-switching operations,” said Warren F. Latau, a Federal Railroad Administration spokesman, during a telephone interview Friday from Washington.

“That said, we do continue to monitor their use as they are deployed across the system, which is occurring in increasing numbers. Whenever there is an event involving one, they are specifically scrutinized,” Latau added.

The agency also responds to any complaints or concerns about radio-controlled locomotives, he said.

Improving safety and efficiency while decreasing costs is of primary importance to MMA as its leaders work with state officials to avert the railroad’s proposed abandonment of 233 miles of northern Maine freight tracks deemed essential to the state’s economy, Grindrod said.

The railroad sought federal approval in February to abandon the tracks, most of which run from Madawaska to Millinocket, by summer, strictly as a last resort and due to its losses, Grindrod has said.

One radio-controlled locomotive system costs $60,000. That’s about the annual cost of salary and health-care benefits for one railroad worker, said MMA Chairman Edward A. Burkhardt, who also is president of The San Luis Central Railroad Co. of Colorado and a member of the board of directors of the Wheeling & Lake Erie Railway, which serves Ohio, Pennsylvania and West Virginia.

The San Luis and Wheeling & Lake railroads use remote control devices, Burkhardt said. Burkhardt also saw remote-control devices in passenger and freight trains in Great Britain and New Zealand, where, as in Europe, one-man crews are common, he said.

“I was in New Zealand when I first saw one. Guys there could not believe that we used more than one person on a track,” Burkhardt said during an interview from Chicago, where his Rail World Inc. office is located. Rail World railroads in Poland and Estonia also use the devices, he said.

About 50 percent of rail services in the U.S. employ the remote-control devices, which were first used in Canada about 20 years ago, Burkhardt and Grindrod said.

Grindrod said he wasn’t surprised to hear that some railroad workers complain about the remote devices, especially since locomotive crews have decreased in size since the 1990s, when five-member crews were common.

Union propaganda. Automation is better than humans... until the programming for the automation does not account for what the programmers were required to do.

Most plane crashes now are due to human error proven after a decade of technologies to fly and land a plane. You actually have pilots disregarding computer information and end up crashing a plane. Once more data is in do you think railroad operations will be as safe as with all human operators?

But damn that whole town is utter devastation. Saturday night, I'm sure peeps were enjoying themselves down there in their downtown at 1 AM. Incredible and scary. I read that people were "vapourized".
H

Greeeeat now they are using this to say 'wouldn't a pipeline be safer instead'.
I

Hi i'm God said:
Greeeeat now they are using this to say 'wouldn't a pipeline be safer instead'.
Click to expand...

Sure, until a train runs into it

Staff member
The thought of huge freight trains filled with toxic and/or flammable tankers travelling back and forth through residential and urban areas by remote control is a nightmare waiting to happen.They should have 2 humans on each of these trains, at least, in case 1 drops dead of a heart attack, falls asleep at the switch, is drunk or high, or otherwise incapacitated.

Staff member
Check out this new video of the fire:

I've got tonnes of family from there, and nearby Piopolis. haven't heard anything, but hope they're okay
D