Worms prevent allergies, and cats can control your mind 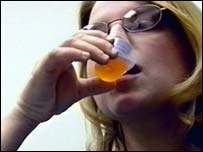 Yo dawg! Eat the worm! Eat the worm!
Who would deliberately drink a dose of gut worms? The answer is Anna Glanz, an ordinary mother-of-two from Iowa.

She's testing the remarkable theory that not all parasites are necessarily bad for us. Some of them may actually help us fight diseases.

A BBC documentary looks at how some parasites are so well-adapted to using humans as hosts, that when you take them away, there are unexpected results.

Ulcerative colitis is a disease of the intestine caused by the immune system over-reacting - in this disease the white blood cells attack the gut as though it's a foreign invader, making it bleed.

Mother-of-two, Anna Glanz, from Iowa, suffers from it and gets terrible cramps and sudden, intense attacks of diarrhoea.

The disease is incurable, but she is now taking part in an experimental trial run by Dr Joel Weinstock, a specialist in bowel disorders.

He's giving her worms to try to treat the disease. 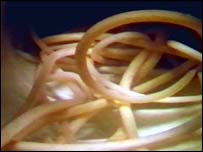 Every three weeks Anna goes to Dr Weinstock's clinic and takes a drink full of worm eggs.
A gutful of parasites might help ease symptoms

But Anna reckons it is worth it: "I don't really think of them as being alive I guess, it's almost just like taking a pill or something.

"I try not to think of them as disgusting or anything like that. And I couldn't live the way I was living. I was desperate to try anything. I just wanted to get well".

The worms grow inside her gut and then pass out after a few weeks, but as a result of having these worms in her gut, her ulcerative colitis is in remission - she doesn't suffer from any of the symptoms any more.

Dr Weinstock reckons that's because we've evolved with worms and actually need them.

Before gut worms were eradicated in the West 50 or so years ago allergies - caused by the overreaction of the immune system - were virtually unheard of, now in the UK one third of us suffers from some sort of allergy.


Nobody wants to go to the toilet and look into the toilet and see something wiggle
Dr Joel Weinstock, worm researcher
So scientists are looking to see if there's a connection between gut worms and allergies, they are wondering if gut worms can somehow damp down the immune system to make it easier for them to live in the intestine without coming under attack.

He said: "Worms require humans to survive. In essence the worms are part of us and it's possible that we've become interdependent and removing worms has resulted in an imbalance to our immune systems. 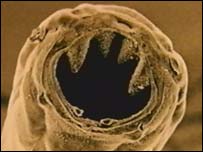 Sup?
Another person feeling the benefit of a worm infestation is academic researcher Alan Brown, who picked up hookworms while on a field-trip outside the UK.


There's about 300 hookworms in my guts
Dr Alan Brown
The worm hangs around damp earth or water droplets, and on contact with skin burrows through and heads for the gut.

There it attaches itself to the wall - and drinks blood to live.

However, in western countries, where people are well-nourished, a moderate infestation is likely to have no nasty side-effects at all.

Dr Brown examines his own faeces under the microscope to try to gauge how many worms currently reside within him.

"Given the number of eggs there, there's about 300 hookworms in my guts."

However, there's a useful effect - his hayfever has virtually disappeared, and now he is working on the powers of the hookworm with a view to developing an asthma drug.

He said: "My wife's horrified - she's totally convinced that one day I'm going to infect the whole family." 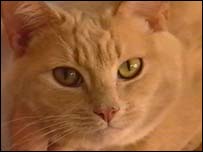 I want to feast on your delicious flesh.

This may not be the only parasite that changes the human body to make it easier to survive. And not all those changes may have potentially beneficial side-effects.

Cats are carriers of the toxoplasma parasite
Some may have developed an extraordinary power to manipulate behaviour.

One third of Britons carry the toxoplasma parasite in their brain.

Its natural home is the cat and it's spread in cats' faeces. It can be picked up by any mammal, from rats to cattle. The main way we get it is by eating undercooked meat (which is why 80% of the French are estimated to have it, with their love of rare meat).

Once we have it we have it for life, there's no way we can get rid of it.

Research shows it somehow manipulates rats' behaviour - it makes rats attracted to cats - their natural predator, so they're more likely to be eaten by a cat and the parasite can complete its life cycle.

For years scientists thought it had no effect on our behaviour, but now the parasite's changing their minds. Recent research suggests that people with toxyplasma have slower reaction times than those without and are also more than twice as likely to be involved in a traffic accident than those who aren't carrying the parasite.

Soooooooo... what are they saying, my cat is trying to eat me?
J

Originally posted by Silvershadow
Soooooooo... what are they saying, my cat is trying to eat me?
Click to expand...

cat's gotta die too
don't let them survive you