Why is the "missionary position" called that?

Victor, you're so juvenile. Learn to be serious, like me. The legend behind "missionary position" is this: Early European missionaries discovered that native peoples, while going about the business of propagating the species, often used unorthodox positions--positions that people today spends thousands of dollars on Kama-Sutra sex therapy to learn. (OK, I exaggerate: the alternative position usually mentioned in this connection is the so-called dorsal or dog-style position, in which the man approaches from the rear.)

Shocked, the missionaries declared that only the couple-facing/man-on-top position was acceptable before the Lord. How the missionaries became apprised of what position the natives were using I don't know, but I suppose if it becomes apparent that everybody else in the village is having a lot more fun than you are, you make it your business to find out why.

That's the legend, at least. It may not be true. The earliest citation for "missionary position" in the Oxford English Dictionary is from 1969, and the Random House unabridged says the term first showed up circa 1965-70. In other words, it may have been invented by 60s hipsters who looked down upon the uncool Presbyterian proselytizers of an earlier age. In any case the missionary position was not some Anglo invention; surveys suggest it is, and no doubt always has been, a common sexual position in most of the world.

Ditto, are you talking dirty to me?
D


But sometimes you run into an article that just needs to be explored!
P

It's quite obviously because in that position, you are on a mission to:

In any case the missionary position was not some Anglo invention; surveys suggest it is, and no doubt always has been, a common sexual position in most of the world.
Click to expand...

And common among other primates, such as orangutans and chimpanzees.

Something to keep in mind next time you want to have crazy "monkey sex." 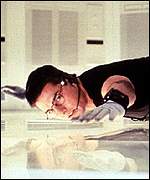 Does sex make your acne worse?

Does sex make your acne worse?

My skin has usually been pretty clear, even through my adolescence. But now I'm 25, and recently I've been breaking out a lot. I also have been having a lot of sex for a couple of months straight. Is there some weird kind of hormone thing that's doing this to me? I thought sex was supposed to _cure_ your pimples. --Marty Tyler, New York

What the hey, Jack, you're getting parallel on a regular basis and you're bitching about zits? Some of the cases I hear from are so desperate for love they wouldn't complain if they turned orange. Be that as it may, you're not the only one to wonder about the acne/lust connection. A couple related propositions you'll hear debated in locker rooms include: (1) having sex regularly makes your beard grow faster; and (2) the more "virile" you are, whatever that means, the faster your hair falls out--obviously a notion that appeals to balding relics such as myself.

In the broadest sense no one doubts there's a relationship between male sex hormones and the state of your skin and hair. Eunuchs, after all, don't go bald, don't grow beards, and don't get acne. But whether sexual exercise per se will put hair on your chest (or on your palms, for that matter) nobody really knows, several shelves' worth of research papers notwithstanding.

Even if sex does increase hormone production, nobody's sure if that means it'll crater your face or chrome your dome. The best one recent survey of the field could do was, "we conclude that the relations between sex hormones and characters of hair and skin are very complicated and require further investigation." A committee will soon be formed. In the meantime, enjoy your lively sex life while it lasts. Soon you'll break up or get married, either way getting ample opportunity to do a baseline comparison.