Why do you take illegal drugs?

Why did you first use illegal drugs?
Why do you keep using them?

Just curious about the different reasons people have.

To play the part of another character instead of the usual calculated, responsible Sunny.
And to get stupid.
P

To stop the hurty things.

alSo suMtImeS I gO baCKwArdS iN tiMe LiKe wiTh liTeshoWs

Cause I can't peddle asprin at a club.

peer pressure! The other kids made me

I've always been pretty experimental, willing to try anything to see what its like.

why do I continue...well, I like they way they make me feel, and its nice to 'escape from reality' from time to time, when I have some free time.
C

Originally posted by deep
ta steek it 2 teh man, man
Click to expand...

Originally posted by janiecakes
for fun.
Click to expand...

Any drug use means that something happened to you, and you need to see a psychiatrist... FOR FUN? RIIIIIGHT.
D 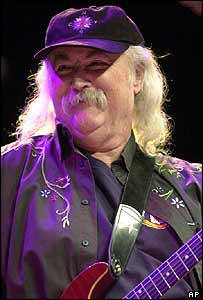 Veteran rocker David Crosby has been arrested on drug and gun charges at a hotel in New York City where he had been staying during a concert tour.

Hotel staff found suspect items in luggage left by the singer after he checked out and alerted police who were waiting when he returned to collect it.

The luggage contained marijuana, a .45 handgun and a knife, police said.

The 62-year-old star, who helped found both The Byrds and Crosby, Stills, Nash and Young, was later freed on bail.

Staff had searched the piece of luggage for identification before Mr Crosby, who played concerts in Manhattan and New Jersey this week, phoned the hotel to say he would be returning to collect it.

He was met by police when he turned up at 0100 (0600 GMT) on Saturday, fresh from the New Jersey concert, at the Double Tree Suites Hotel in Times Square to pick up the luggage.

Dressed in black jeans and a tee-shirt, he appeared in court to hear illegal possession charges relating to a gun, a hunting knife, ammunition and about one ounce of marijuana, found in a wooden box.

Released on bail of $3,500, Mr Crosby faces a sentence of seven years for the gun charge if convicted.

David Crosby, whose hits include the hippy anthems Almost Cut My Hair and Deja vu, has previously served prison time on drug charges. He is due to return to court on 19 May.

Ahh ask Dave if you get a chance!!
S

i like to have sex for more than 30 minutes a-go.
S

i want to kill every one of you.

Originally posted by Syntax Error
i want to kill every one of you.
Click to expand...

Yeah, about that mdma I got you-- I think I mixed it up with the pcp. Sorry about that.
S

that's refreshing. because i was pondering how meaningless my existance is and i was wondering why i was getting so depressed by it.

guess it's time to grow up.

Originally posted by Hamza
Why did you first use illegal drugs?
Why do you keep using them?

Just curious about the different reasons people have.
Click to expand...

To feel the love.
It's not my fault someone made it illegal.
;p
-J

I see a little silhoutte....
B

because 'illegal' drugs shouldnt be illegal.
you can legally buy arsenic, or any other poison, and itd probably make you feel funny for a while, till it took your life.
but drugs that do funny things to you without killing you immediately are illegal? please mister officer.
also, im part of mother natures plan...medical science improves so that humans are no longer subject to natural laws, such as living according to the resources available to you in your environment without causing the extinction of other species.
so we take drugs and shoot each other, and thus check the burgeoning human population that threatens other species with extinction.