Who Will Win the Music Streaming War?

Who do you use?

I use Spotify Premium but gotta say I like Apple's integration with my current music library. Think I'll be switching to Apple Music after the 3 month trial is over.

Which do you use? And which service will get swallowed up?
D

The free ones. And once they're all free, the biggest/most convenient one.

"Hey, remember that thing that you used to buy at HMV, and then got for free in a diminished form online? How about you now pay for that diminished product?!"

The game done changed; it's a sad fact in many ways, but a fact nonetheless.

I really don't get the allure of streaming music... can someone explain this to me?

I don't buy or download music anymore nor do I hardcore follow music anymore. I like curated playlists by theme or artist as it helps me discover new music I'm too lazy to go search out for on my own or quickly pull up an artist that I like. Also helps with kids and their goddamn Disney soundtracks.

Bandwidth is cheap these days, why not use it instead of eating up precious hard drive space across all your devices/machines. I have a hard enough time managing photo and video drive space on my home machine never mind adding a huge music library of which you'll only use 1% at any given time.
S

The Kid said:
I really don't get the allure of streaming music... can someone explain this to me?

You can basically listen to whatever you want when you want. You are not confined to your own collection.

I use spotify premium for home and in car and I use Songza at work. I also have large youtube playlists built up but there is nothing worse than waiting for your favorite song to come on and you realize the user has removed the video haha.

I have been using songza for a while now. Love their playlist. Keeps things fresh. I bat back and forth between my high end FLAC files for the stuff I love, and a free streaming service that serves up music I might not ever know about.

As far as which one wins, not sure. But free does have its advantages.

I use youtube, it's free, and you can find any song.

Other than that internet radio. Unless mainstream service providers like Bell in my case offer unlimited data for cell usage, there's no use for it.

This makes me angry. Taylor Swift is the new corporate executive trying to make sure she get's every cent she's owed or else her shit is pulled from a streaming site. 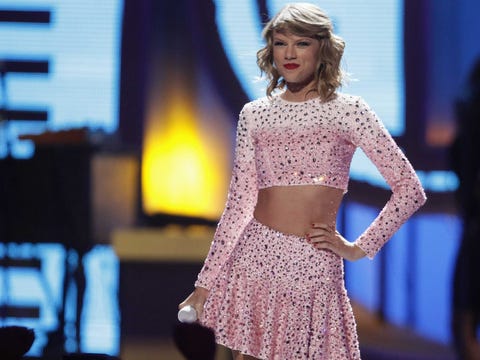 She reiterated opinions she voiced in a Wall Street Journal op-ed in July, saying that artists should value their art and make sure that people are paying enough money for it.
Click to expand...

Taylor Swift has built her image on being a champion of the underdog, so perhaps it's not entirely surprising that the chart-topping singer chose to pick a fight with the world's most profitable company.

Already adored by millions, Swift won legions more fans this week when she forced Apple to change how it will compensate artists for its new music-streaming service.
Click to expand...

Then they turn around and force Idiocratic policies on "little guys" Photographers.

Taylor Swift is speaking out after a photographer slammed her as “hypocritical.”

The singer made headlines in June when she blasted Apple and its CEO, Tim Cook, in an open letter on their decision to not pay artists during an initial three-month free trial of Apple Music, their new streaming service.

Now the “Blank Space” singer is being called a hypocrite by angered concert photographers who claim she is guilty of the same practices for which she criticized Apple.

In an open letter directed to the 25-year-old hit maker, British photographer Jason Sheldon calls out the pop star for “restrictive contracts” at her UK concerts that essentially give ultimate ownership of all professional photos to the singer.

“Taylor Swift has notoriously bad contracts for photographers at her concerts,” Sheldon tells Page Six. “At her concerts she restricts the photographer to be able to publish the photos one time in a single publication so if you don’t sell it once, you don’t make money.”

According to Sheldon, following her concerts, Swift retains the perpetual right to use any photographer’s images worldwide.

A rep for Swift has responded to Sheldon’s letter, telling Page Six:

‘The standard photography agreement has been misrepresented in that it clearly states that any photographer shooting The 1989 World Tour has the opportunity for further use of said photographs with management’s approval. Another distinct misrepresentation is the claim that the copyright of the photographs will be with anyone other than the photographer — this agreement does not transfer copyright away from the photographer. Every artist has the right to, and should, protect the use of their name and likeness.’
Sheldon insists his attack on the “Shake It Off” singer isn’t personal, but her campaign against Apple gave him the opportunity to vocalize an ongoing gripe with musicians among photographers.

“I find Taylor Swift’s stance on contracts to be extremely hypocritical,” declared Sheldon. “But she’s not alone in it. Foo Fighters, Kylie Minogue and Beyoncé all have restrictions that are incredibly unfair to professional photographers.”
Click to expand...

The fact of the matter is, no teenagers which are using this site are NOT going to listen to the "little guy"

It's manipulation IMO. You shoudn't even be giving these sites your business. It's just perpetuating this self entitled, make shit music, and let the corporations reinforce that. Like EDM is being bastardized.

No one in their right mind would sell out the way these guys have in the past 10 years. Real musicians in the 70s-90's would smack these corporate musicians.

No one ever would do a GAP Commercial, when they had self respect.

Taylor swift started a twitter war, and Apple had to listen, given the demographics. It's not to save the "little guy"
Last edited: Jul 3, 2015

So my answer, is that Taylor Swift will win the Music Streaming War.
T

Beatport and Spotify have announced details of a partnership.

According to Billboard, Beatport, which was bought by Robert F.X. Sillerman's SFX in 2013, will bring festival videos and playlists to the streaming service.

"We're very excited to be the first streaming service to partner with Spotify," Beatport CEO Greg Consiglio told Billboard. "We have a unique perspective on what's trending, which new artists are breaking. We're taking that expertise to Spotify—we'll be curating unique weekly playlists that really only Beatport can do. It's a really interesting opportunity for us to be looked at by Spotify, where they have a lot of electronic music, but they don't have the same expertise that we do."

The announcement comes seven months after Beatport first revealed details of its own music streaming service.

Apple Music has gained "millions and millions" of subscribers since its launch last month according to CEO Tim Cook.

Neil Young has announced that he is dissatisfied with the compression rates of streamed music - citing sound degradation as damaging to the intent of the artists recording - and will now launch his own service where he will break into people's houses whenever he wants and perform all of Taylor Swift's repertoire before eating everything in the fridge, clogging the toilet, and absconding into the night.

Flipping the model like the antiestablishment rocker that he is, Neil is offering subscriptions to protect your home from his new service, starting at $399 a month.

I use Rdio paid subscription, and am quite happy with it.
S