I used to have a membership for a handgun shooting range, & I used to shoot skeet with a 12 guage; I haven't dome either in years though. I became a decent enough shot with either.

I love trap and skeet shooting. I don't have to got to a gun club because I live in the sticks so I just step out my back door and I can trap shoot the day away.

Bumbaclat said:
keep your hands off my thread!

if anybody here has shot somebody or been shot I'd like to hear about it.
Click to expand...

Well I have not been shot myself but several years ago when I lived by Regent Park I did personally know a couple people who got shot. One dude got shot twice the second time the guys from south Regent tried to blow his nuts off on Valentines day. He got out of the cab with his gfriend and buddy said "Happy Valentine's Day!" Then BAM right at his nuts. Missed em by 2 inches. I actually had guns pulled on me several times. Shot gun in the face thanks to 51 division. 9mm again thanx to 51 div and a couple other time that were way less scary cause they were gansta types. Overall I got the feeling that the police were much more likely to shoot me than the gansta mofo's cause they had way less to fear than the g's. i dunno scary shite all of it anyway!

EltrikSoulCntlr said:
One dude got shot twice the second time the guys from south Regent tried to blow his nuts off on Valentines day. He got out of the cab with his gfriend and buddy said "Happy Valentine's Day!" Then BAM right at his nuts. Missed em by 2 inches.
Click to expand...

"Won't somebody please think of the testicles"

too many too list CDN Armed Forces will do that.

When I was in Englad got to play around with an SA 80, nothing special, nice and compact though.

L96A1 period, hands down, 1000 yards , you wont even know its coming, or have a chance ot hear the recoil

just back from a 3 day layover in arizona. when in rome...

h&k USP .40S&W
the recoil buffer assy tones down the kick considerably making it into a teddy bear of a 40. double taps come easy and i really like the decocking lever so you can rock it condition 2 if that's your thang (a round chambered and the springs unloaded). 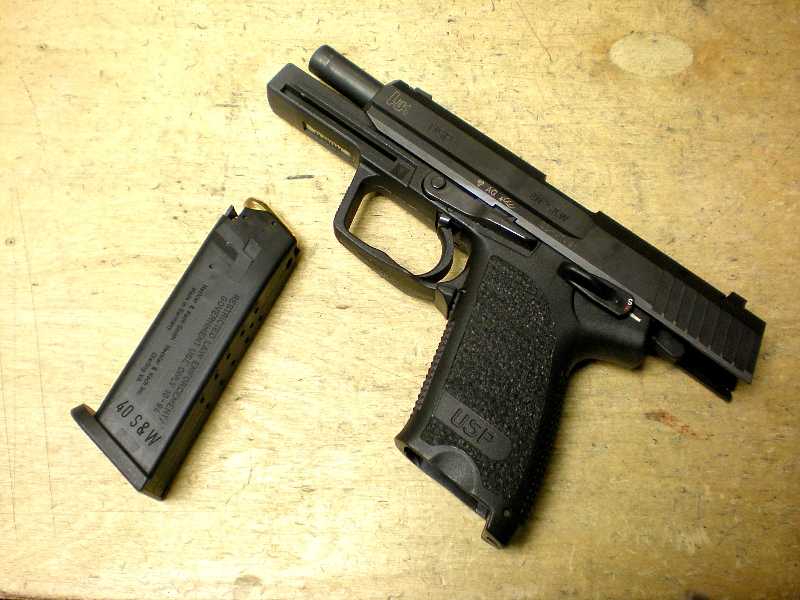 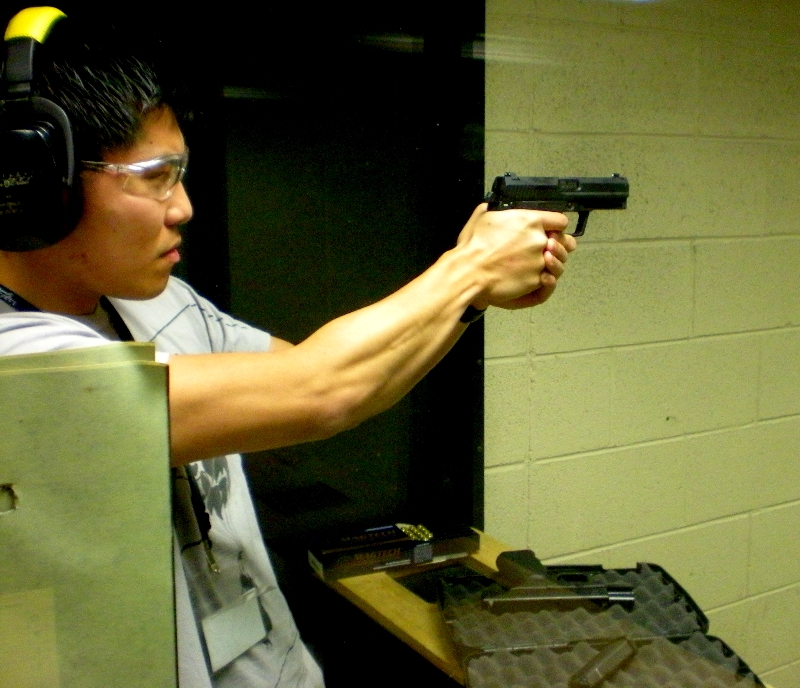 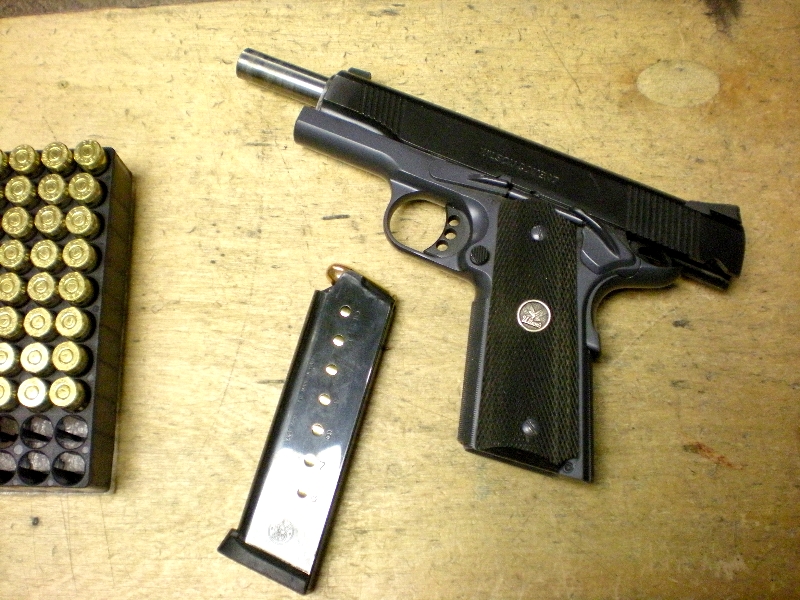 put a hundred rounds through each of these and the wilson was the only one that jammed on me which my cojo caught in this pic before i noticed it. turned out to be a fail to feed stoppage which was weird considering we were shooting standard ball ammo (vice hollowpoints). you can see the slide sitting an inch back on the rail. it functioned flawlessly the rest of the time (no double feeds/stovepipes/FTEs) so i blame the topload off the cheap mag. 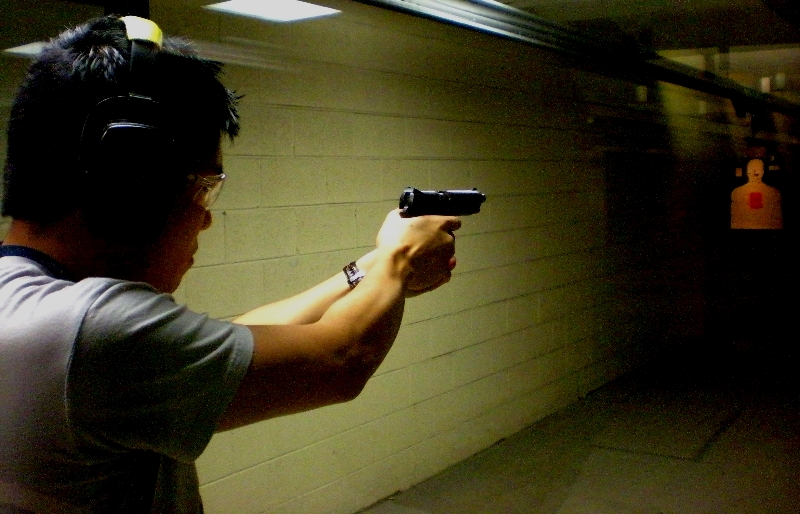 nighthawk custom tactical GRP 1911 .45ACP
a bunch of guys who cut their teeth at wilson left and started this company. if the wilson is a rolls, the nighthawk is a cadillac. still a great gun but cheaper all around from the wilson. looks the business though. 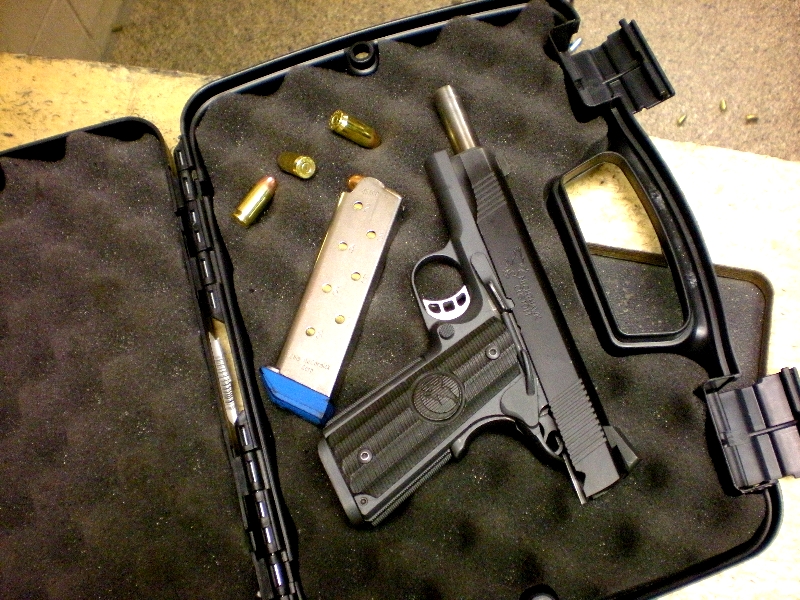 despite how fun it is, every visit to the range in the US scares the shit out of me. walk in from the street, talk shop with the dude behind the counter, initial a waiver and you're laying lead downrange in 5 mins without any direction or training from the people on hand. my fav was the yoga mom stopping in on her lunch break to complain about a gun she just bought because she said it was hard to rack the slide without ruining her nails so she wanted something else. it's nice to be back in canada.

can you shot an AK in the shooting ranges in the US? or only handguns and SMG's?
B

Ditto Much said:
Its funny cause everyone at the show is SO anti us govenment its unreal. All of them armed and all of them hate the government and all of them republicans. I'm convinced that these guys snort gun powder.
Click to expand...

On an American board I participate in I was told by a dude there that you can often find copies of The Turner Diaries for sale at gun shows - you ever see any there??
M

Puma said:
can you shot an AK in the shooting ranges in the US? or only handguns and SMG's?
Click to expand...

praktik- i wouldn't doubt it
M

The Molniya R-60 which has unbelievable burn during late stage delivery.

The JL-1 which you can grab at a steep discount while in Bangkok. Solid fuel, devastating payload, easy delivery, and stores well. A real Chinese bargain.

I have an old LIM-49 Spartan up at the cottage that we're planning on taking to the range over the Christmas holidays. The ignitor was a bit flakey when we bought it. Gave her some TLC this summer. Now she's ready to rock.

Too bad there aren't any ranges in the city

I went trap shooting today so I thought I'd bump this thread. I was in between work meetings so I was wearing a suit. Got through 4 rounds of 25 with minimal shoulder pain.

Give it up for shoulder padding!

What? No more Russian money pouring in?

praktik said:
What? No more Russian money pouring in?
Click to expand...

Outsourcing patriotism, to own the liberals.

el presidente Highsteppa said:
Outsourcing patriotism, to own the liberals.
Click to expand...