What's that oil that helps memory?

Okay, so I've got less than three weeks before I write my CFA level 1 exam, and I've been studying enough to make picking cotton on a plantation look like fun (hence my hiatus from Tribe).

I'm trying to cram inordinate amounts of info into my head in these last few weeks, while trying not to have a mental/nervous breakdown.

I know there's some natural oil like Cod Liver Oil or Flax or one of those things that's supposed to increase memory retention or brain power or something.
Does anybody know which one it is, or have any other natural ideas to help my studying and retention??? I'll pass on the Ritalin suggestions, though.

One of my crazy Russian friends, when I was still in Chicago, tried to tell me that putting citrus fruit around my computer/books when studying helps open up some neural channels or some bullshit. I tried it with half a lemon and I don't think I got any smarter.

because we'd be at the beach
E

If I remember correctly, it does.
E

I do well on all my exams...like 80%+ and I study stoned all the time. Wonder how I would do if I stopped smoking?

i smoked a lot of pot in university, and it really did help. i studied high all the time.
E

Tho I never go to exams high! I'd be too freaked out. 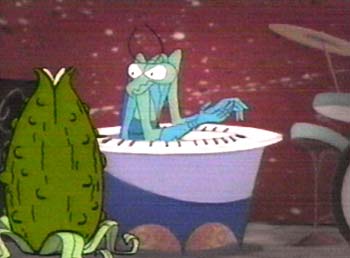 There isn't a magic bullet / oil you can pop that will have a dramatic effect on your memory. Things like essential fatty acids, fish oils, phosphotidylserine will have beneficial effects on your nervous system function as a whole. Gingko is pretty overrated. Smart drugs generally tend to be rare stimulants or dopamine agonists of some mechanism or another. Think about it rationally - if such things actually did turn people into supergeniuses, would it be a well kept secret? The effects (if any) are subtle or placebo more than they are spectacular.

In practice, I think the best quality of thinking and retention occurs from careful and deliberate analysis, consistently performed, rather than jacking up on crank of some kind and tearing through material at a superficial level.

In short, you're best off to eat right, sleep right, relax anxieties so as to be able to better focus on making a consistent effort between now and then.
C

Thanks y'all...it's been both a humorous and an educational 5 minutes.

I'm still freaking out though!

Settle down. It's the nervousness that works against concentration and subsequent retention.
T

how about Lorenzo's oil?
K

I think you're thinking of Fish Oil.
D

Having trouble remembering a phone number? Eat some mashed potatoes, then try again.

Eating common carbohydrates, like mashed potatoes, may improve memory for up to an hour after ingestion. In a University of Toronto (UT) study of 20 men and women aged 60 to 82, memory improved by about 37% after eating barley, 32% after mashed potatoes and 8% after drinking a glucose beverage.

Previous research suggests that glucose boosts memory by producing acetylcholine--a chemical that enhances brain cell communication. But the UT study, published in the American Journal of Clinical Nutrition, found that while barley was least effective in raising blood glucose levels, it was most effective in enhancing memory. Lead author Randall J. Kaplan, a nutritional science Ph.D. candidate at UT, believes there may be other substances in foods that affect memory. "We think it may have something to do with signals that gut peptides transmitted to the brain," he says. The study's long-term aim is to find food-based treatments for reducing memory loss in Alzheimer's and diabetes patients.
Click to expand...

if you can find a good phrenologist that can inspect your skull for characteristics of ill humours, it may help.
D

I wouldn't use any kind of fish liver oil as it may contain toxic contaminants from the world's dirty ass water.........

Is it Primrose oil?
A

danielablau said:
I wouldn't use any kind of fish liver oil as it may contain toxic contaminants from the world's dirty ass water.........
Click to expand...

Not even cod liver oil?