What would You wear to the Oscars?

I hope that Jesus doesnt wear the same thing as me!!

Jesus, at the Oscars

Fashion was most likely not the first thing on Jesus' mind. Yet we feel the man who claimed God effortlessly clothed the lilies of the field would not be averse to wearing fine fabrics of subtle hue.(1) We wondered then if, like Joan Rivers, Jesus was cast to play the starring role in the story of his life, and he was nominated for an Oscar, what he would wear to the awards ceremony. My first thought was that he would not attend. But our resident Bible scholar said, "Of course he would go! This is a man who entered the church with a whip, for God's sake, and USED IT! He's definitely NOT shy about making an entrance."(2)

While most fundamentalist and evangelical Christians believe that Jesus looks better on the hanger, at Adult Christianity we believe differently. We want Jesus, off the rack, out of the closet and into the scene. While Jesus is the same yesterday, today and forever, we're quite sure his handlers would, with key accessories, periodically update his timeless style.(3)

Just picture it. Jesus arm-in-arm with the "disciple-that-Jesus-loved" walking past flashing cameras, posing for reporters. Liz Smith would be falling over herself trying to find out the identity of Jesus' mystery date. Jesus would not wear an ordinary tux. Since in Christ there is no male nor female his clothes would best be described as unisex.(4) I see him in one of Laggerfeld's men's skirts, long, black with an appropriate jacket. (Laggerfeld has the classiest fans.) He'd be wearing a transparent latex beaded shirt , skin-tight (like the Prada) and lace-up boots with big heels, as a nod to his blue-collar roots. His dreads would be like washed silk. Although this is all speculation, I'm quite sure Jesus would not be nailed down to one particular look. I think he would always surprise.

And there's no doubt in my mind that Jesus would win the Oscar. Even though I'm quite sure that Jesus was Black, most people picture him as white. And white men that say sweet, simple things, "Life is like a box of chocolates...," "Definitely time for Wapner...," "Do unto others...," always bring home the gold. Consider "Rain Man," "Forrest Gump," "The English Patient," "Shine," the pig in "Babe." As long as you're white and harmless, anything you say is gospel.

But Jesus was neither. Remember the whip? He didn't take it into a gay bar or an abortion clinic, or even a Talbots. He took it into a church. And he brought the house to its feet.


Will there be fashion in Heaven?


Considering how many Christians will be there I fear it is unlikely.

Jesus has such long, luxurious locks, do you think he uses a shampoo and conditioner in one? Any relation to Jose Iber?


Funny you should ask. While I am convinced that Jesus was quite Black and had long, silken dreads, others, in fact most, maintain that he was white. When a popular portrait of Jesus was painted in the 1940's the chairman of Wheaton College complained about the "pretty head of Christ," and Robert Roth wrote, "we have a pretty picture of a woman with a curling beard who has just come from the beauty parlor with a Halo shampoo, but we do not have the Lord who died and rose again." The Lutherans were less subtle calling the popular depiction of Christ a "bearded woman."(5)

Sure he died to save the world, but his hair held up. Don't hate him because he's beautiful.

And I understand that Jose Eber is a 102nd cousin of Christ 47 times removed, on his father's side, but only if you don't buy the pagan virgin birth angle.

Jesus, at the Oscars

DAYUM! She is the sexiest woman alive.

Except for one special person in my heart.
P

hot pants and aviators.......and maybe one of those t - shirts that has a bikini - clad woman's image on the front and back.

I LOVED Jada Pinkett-Smith's dress, I thought she looked amazing! Anything Prada or vintage Dior.

Things I wouldn't wear to the Oscars: I think worsed dress last night definitely has to go to Paul McCartney's new wife Heather Mills - her outfit was totally heinous.
P

linda hasnt even been dead for a year ... has she?

DAYUM! She is the sexiest woman alive.

back off! she's mine!

LOL @ Deep and BBB - Both Theron and Thurman looked amazing last night, they are both ridiculously hot!
S

linda hasnt even been dead for a year ... has she?

I know! I was a little dissapointed in him when I found out he started dating her like a month after Linda died, I guess whats inportant in the end is that he is happy.

I'd wear a Buffalo Bill original.
B

Originally posted by Loki God of Mischief
I'd wear a Buffalo Bill original.
Click to expand...


Nothing says style like a nice human skin tuxedo.

I was loving Nicole Kidmans dress.
the soft pink number.
she looked very princess'ish in it.... that would have been my pick !

I would've worn that.

I would've worn that.

Originally posted by Cheeka
I was loving Nicole Kidmans dress.
the soft pink number.
she looked very princess'ish in it.... that would have been my pick !
Click to expand...

The dress would have looked better on someone who wasn't completely translucent.
S


The dress would have looked better on someone who wasn't completely translucent.
Click to expand...

I was thinking the exact same thing, her hair was too light and she was way too pale (not that I am encouraging fake and bake or anything). I found a lot of women chose to wear really pale pastels and it just didn't suit the majority of them.

Hey Val - what do you think? Maybe we can give Joan and Melissa a run for their money next year, I am sick of watching that bitch cut up all the stars, I think the network needs some younger bitches, some fresh blood.
D

I'm in, the only problem would be the foul-language (on my part). As well, I'm not too sure how keen the stars would be when pressured to answer....

Originally posted by daddyiwantchocolate
I'm in, the only problem would be the foul-language (on my part). As well, I'm not too sure how keen the stars would be when pressured to answer....

Thats why it would have to run on HBO.

From the Ministry of I'd wear that. Impeccable taste from Trey Parker and Matt Stone. They actually went to the Oscars like that when Blame Canada was up for best original song. 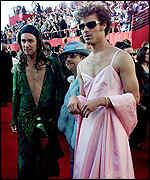 From the Ministry of Trey Parker's dress was inspired by Jennifer Lopez, while Stone's by Gwynith Paltrow.

And I'd skip the ceremony, hang out in the back with Courtney Love and Winona Ryder and cause trouble. Then off to the Vanity Fair party.

Ah, the life of a celebrity.

Well, I'm going to bed to do my homework and eat a grilled cheese sandwich. Ah, the life of a nobody.
N

followed with the male version of this spectatular 80's one peice snow suit.

yeah, in hot pink too.
I'm secure in my sexuality and at the ocars, you can get away with anything as fashion anyways!