BATAVIA, Ohio -- An Ohio man who neighbors say was devoted to his meticulously kept lawn has been charged with murder in the shooting of a 15-year-old boy who apparently walked across his yard.

A 911 tape recorded 66-year-old Charles Martin as saying, "I just killed a kid." Martin also told a dispatcher, "I've been harassed by him and his parents for five years. Today just blew it up."

According to police, Martin and Mugrage had a history of arguments about Martin's yard. The two argued again Sunday, police said, and when Mugrage returned, Martin was waiting outside and shot him twice.

He then called 911, officials said.

Later, the operator asked Martin to explain what happened.

Another neighbor described the victim as "a good kid."

Mugrage, a student at Glen Este High School, was pronounced dead at a local hospital. Authorities said Martin has no prior criminal record, but he does have a history of complaints about neighbors allegedly damaging his property. Other teens from the neighborhood said Martin was obsessive about his lawn.

Martin is scheduled to be back in a Clermont County court Thursday.

wtf?! that's nuts...what ppl used to get in punch ups for now turns into murder
C

what is with old people and the need for such orderly lawns anyways?

ChrisD said:
I think this was going to be about some girl and her trimming her whooo haaaa
Click to expand...

this is old news. hehehe

yah just imagine what Mr. Wilson would have done in present day.... 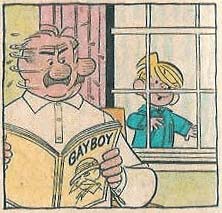 [- FuNKtiOn -] said:
what is with old people and the need for such orderly lawns anyways?
Click to expand...

it keeps them from thinking about death.
S

Thanks for making the thread not work safe.
4

Ya, thanks a lot you fucking putz.

i tried to edit, but time limit has been hit. My sincerest regards if anyone gets shit-canned over this. Although if you are at work, maybe, you should be working.
Last edited: Mar 21, 2006
4

Try using your brain next time, pissface.
B

That kid didn't have lawn to live anyway.

no need to get hostle.

This guy certainly has a way of weeding out the local no-goodnicks.
4

freshest1 said:
no need to get hostle.
Click to expand...

freshest1 said:
no need to get hostle.
Click to expand...

well buddy, some of our bosses don't mind if we peak on trib now and then when it's slow. But they just might have a problem with that image....

I wonder if that kid found out if the grass is actually greener on the other side...
F

thom100 said:
well buddy, some of our bosses don't mind if we peak on trib now and then when it's slow. But they just might have a problem with that image...
Click to expand...

I concede to your point. Like I said before, I would have taken it down but the TL expired.