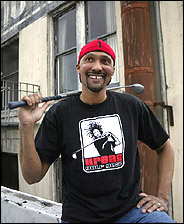 Urban Golf Gear has the kind of buzz that money cannot buy:
a stable of unofficial celebrity endorsers, who wear its clothing without being paid, and free product placement on television sitcoms and movies.

Now all it needs is customers. The company and its logo - a black man swinging a golf club, his long dreadlocks dancing in the breeze - may have garnered a lot of publicity, but they have yet to command a presence where it counts: on department store shelves.

"It could be the same kind of store that carries Nautica or Polo; they won't even let you present to them," lamented Craig Tanner, a 41-year-old stockbroker-turned-entrepreneur who founded the company in Oakland, Calif., in 1997 with $1,500 that he earned refurbishing used cars. "That's one of the toughest things, especially when you have customers all over the country who are calling you every day saying, 'Where can I find your gear?' "

It is a quandary that dogs untold fashion start-ups.
Nothing is more coveted, or more fought over, than space in clothing stores.

That means competing against the likes of Ralph Lauren and Giorgio Armani - and until upstarts like Urban Golf Gear can find a way to do that, they are pretty much left to their own devices, no matter how much buzz they might create.

For Mr. Tanner, that meant limiting sales of his golf
apparel and accessories, as well as trendy items like
baby-doll T-shirts and bucket hats, to the Internet and
random sporting events, festivals and conventions.

With revenue last year of $400,000, he has decided to try direct sales to reach consumers.

After studying the business models of companies like Avon
and Tupperware, Mr. Tanner began seeking independent distributors for his products in the United States, Europe and South Africa.

In January, he selected 130 of them to sell them to golf
and hip-hop enthusiasts in much the same way the Avon lady markets skin-care products to women: holding parties, working social networks and attending conventions.

If all goes according to plan, revenues should reach $1.3 million this year, Mr. Tanner says. Even if the program falters, he says that sales should exceed last year's because his distributors have paid in advance for the merchandise.

Analysts said the distribution network Mr. Tanner had
created would no doubt increase sales and raise Urban Golf Gear's profile. But, they said, that it would not be enough to help his products reach the mainstream. His ultimate goal still has to be winning over national retailers, they said, and that will not be easy.

Unlike many popular urban clothing labels like SeanJohn, RocaWear and Phat Farm, which were all founded by people involved in the rap music industry and therefore have broad urban and suburban appeal, Urban Golf Gear is designed by an unknown who is marketing clothes for a country-club sport. And the apparent narrowness of its target customer base, minority golfers, is probably the biggest impediment to arousing retailers' interest.

Retailers "may be looking at it and saying there are four
and a half black men that like to play golf, and that's not enough market for us," said Wendy Liebmann, the president of WSL Strategic Retail, a consulting company in New York. "One of the biggest issues here is being able to convince the retailers that this is a big enough opportunity, whether it's purely an ethnic opportunity or it's a total design opportunity."

Mr. Tanner responds that few people who wear the Polo line actually play the sport, and even fewer consumers who wear Nautica's clothing are sailors.

Some industry analysts suggested Mr. Tanner could gain
broader appeal by redesigning the company's logo to
eliminate its ethnic identity, but that is an option he
long ago rejected.

In 1998, a club maker at a P.G.A. golf show in Orlando
showed significant interest in selling Urban Golf Gear alongside equipment endorsed by the professional golfer Fred Couples, he says, but only on condition that the dread-locked golfer be removed from the logo.

"I'm sure that would have been a lucrative contract for us,
but at the same time I was building a brand," said Mr.
Tanner, who created Urban Golf Gear after reasoning that
Tiger Woods, then an amateur golfer, would join the professional tour and make golf an attractive sport to urban youth. "The vibe I got was 'Hey, that's going to offend people.' I said there's no way I'm going to bastardize my logo. I'm still in business. They're not."

Precisely because the Urban Golf Gear logo is such a conversation piece, it could represent the line's strength if it were marketed like the popular Fubu clothing line, some analysts said.

Fubu, an acronym for "for us, by us,'' was created in 1992
by four young black men from Queens who appealed to
consumers who wanted to support a black-owned clothing
label. But even that formula has its difficulties in the golf-apparel business, a estimated $1 billion market that is dominated by Nike.

"What they're trying to do is get the consumer to endorse
this brand because it will help make a statement and that statement is we as a consumer are moving beyond and golf is the metaphor," said Marshal Cohen, the chief analyst on the fashion industry at the NPD Group, a market research company in Port Washington, N.Y. "But the consumer doesn't think that way. They'd rather buy the aspiration brand. It's easier for them to go that way than to go the cerebral route."

For now, Mr. Tanner believes his best bet for persuading
the big boys that his products have mass appeal is to
continue draping them on celebrities in front of national audiences (and he has an agreement with two Hollywood agents to make that happen).

The actor Samuel L. Jackson sported one of the company's
black bucket-style hats during a brief interview on the TNT network's coverage of a Los Angeles Lakers' game last year. And actors have worn the company's clothing while appearing in television programs ranging from "The George Lopez Show" on ABC to "Soul Food'' on Showtime.

Mr. Tanner also plans to seek out sales contracts with
upscale boutique retailers like Fred Segal. Eventually, he would like to license his brand to golf-equipment makers and home-furnishing companies.

But he is considering each of his business moves very carefully; he learned from harsh experience that one big mistake can derail a small business.

In 1994, a company he founded that made bandana-style head wraps, SWOL Big-headed Sportswear, disintegrated after a trademark dispute with his business partner.

There have also been stumbles at Urban Golf Gear. In the company's early days, for example, it lost money when local retailers who took its products on consignment did not pay for them.

These days Mr. Tanner is optimistic, betting that his distribution plan will take his line to new consumers and perhaps create a small band of entrepreneurs.

He also recently signed a merchandising deal with CourseCo,
a golf management company that is scheduled to begin
selling Urban Golf Gear products in 13 golf pro shops in Northern California in the spring. And he is about to get some free design help from student interns at the Fashion Institute of Design and Merchandising in San Francisco.

"I've seen so many things," Mr. Tanner said. "You can't be afraid of failure. You're only a failure when you stop trying at the first sign of adversity. Victory doesn't always go to the smartest guy, it could be the guy who could just hang in there the longest."

"I've seen so many things," Mr. Tanner said. "You can't be afraid of failure. You're only a failure when you stop trying at the first sign of adversity. Victory doesn't always go to the smartest guy, it could be the guy who could just hang in there the longest."
Click to expand...

I was golfing at a course north of guelph a few years ago and there were fdco 416 ads in some of the carts, and golf shirts availible for purchase inside the clubhouse.
D

[beastie boys] I got my funky fly golf gear from head to toe. [/b-boys]
D

I'd rock it in a heartbeat

Originally posted by Spinsah
I was golfing at a course north of guelph a few years ago and there were fdco 416 ads in some of the carts, and golf shirts availible for purchase inside the clubhouse.
Click to expand...