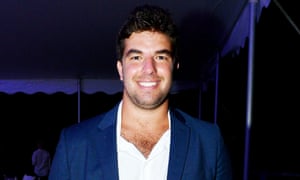 Fyre festival organiser Billy McFarland pictured in 2016. Photograph: Patrick McMullan/Getty Images
Two attendees of the disastrous Fyre music festival, which promised Caribbean glamour but delivered chaos, have been awarded $2.5m each in compensation and damages after they sued the organizer Billy McFarland.

Seth Crossno and Mark Thompson each paid $13,000 for VIP tickets to the festival on the Bahamas island of Great Exuma, which, following promotion by social media influencer supermodels such as Bella Hadid, was set to feature music from Migos, Major Lazer and Blink-182 in a luxurious setting. The festival quickly became notorious though, when the accommodation turned out to be dome tents and the food cheese sandwiches; attendees also found themselves stranded at the airport when they tried to leave.

Crossno and Thompson filed a lawsuit in May 2017, and were awarded damages based on losses for hotels and flights as well as the “mental anguish” they faced. “This was more than just a scam,” Crossno said. “It was fraud that was way over the top.” Their lawyer Stacy Miller said that McFarland “lured these young men away from their homes to another country. It was a very dangerous and scary situation.”

McFarland is currently in jail, awaiting sentencing for fraud charges he pleaded guilty to in March 2018. He has since been accused of a scam in which he produced fake tickets for the Met Gala and a Victoria’s Secret fashion show. McFarland’s lawyer said they would “vigorously contest” those accusations.

He is believed to have some remaining assets – $50,000 in cash and a monthly $40,000 income – though it is uncertain how much of their award Crossno and Thompson will be able to secure. “I think there’s going to be a lot of people looking to collect, but we’ll be first,” Miller said.

The rapper Ja Rule, who co-organised the festival with McFarland, was initially named in the lawsuit but was later removed after an unspecified agreement was reached.

Is that article relying on the numerical ambiguity to make it look like a more sensational headline?

I think most people understand that $2.5m refers to $2.5 million. Besides it’s true they were awarded that amount each but as the article states whether they will collect on it is another matter.

The Vice story is a bit more clearly worded.