Not bad for a woman who would have been deported under her own Husband's immigration rules. 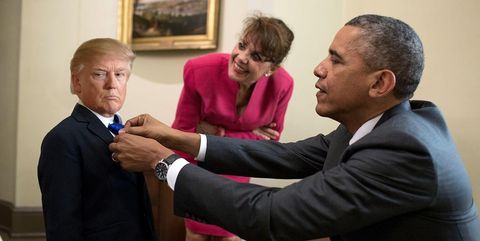 Actually most of those were pretty spot on

Which ones didn't land for you?

I thought these were the best ones:

Sessions met with Russian envoy twice last year, encounters he later did not disclose
fucking guy perjured himself, and i bet not a damn thing will happen.

I think the court will be "in Sessions". Al Frankin has him pretty dead to rights on his senate question.
Sessions best defense may be that "I am old, I forget things."
"where am I?"
"I think I made messy in my pants."
"who?"

Breitbart Under Bannon: How Breitbart Became A Favorite News Source for Neo-Nazis and White Nationalists
T

breaking news...politicians lie, cheat and steal to simply get into, and remain, in power.

'They Really Want to Blow This Place Up': Scenes From Trump's State Department

A Day in the Life of a Disgraceful Commander in Chief

"A more fitting tribute to a member of special operations like Owens would be to question the wisdom of the raid and to learn from any mistakes that were made to mitigate them being repeated in the future.

A broader question would be to ask why military force should be used at all in Yemen, much less for 15 consecutive years. Or, relatedly, why does America’s targeted adversary there keep growing and growing? The State Department’s 2010 terrorism report claimed: “[Al Qaeda in the Arabian Peninsula] is estimated to have several hundred members.” The 2013 report stated: “AQAP is estimated to have approximately one thousand members.” In the 2015 report, the estimate was up to “four thousand members.” Are U.S. counterterrorism policies, or support for other nations’ policies in Yemen, growing terrorists there? If so, why continue to pursue them?

In an unscripted moment, President Trump ended this passage by speaking for the deceased Owens — “he’s very happy because I think he just broke a record.” To say this on the same day that he had abdicated any responsibility for his authorizing the operation that led to Owens’s death is a truly despicable moment in civil-military relations. One hopes that Americans recognize how unprecedented and harmful this is to U.S. service members and ultimately to the country itself."

In last days, Obama aides seeded trail of intelligence on Russian meddling for investigators to find

GOP closing ranks and holding the line on Sessions

So ... the outgoing admin did a good thing by preserving and disseminating important information that might otherwise have been destroyed?
B

Sessions recuses self.
I dont remember that.

Bass-Invader said:
So ... the outgoing admin did a good thing by preserving and disseminating important information that might otherwise have been destroyed?
Click to expand...

I think I asked before, how deep does the rabbit hole go? The answer is deep.