This administration literally lies about everything

So the worst economic contraction in the country's history gets announced and minutes later Trump tweets about postponing the election... Coincidence, methinks not...

... And then Herman Cain dies from COVID, which he caught at the Tulsa rally.


All before noon. What a morning.

Trump told Jonathan Swan in a White House interview with "Axios on HBO," taped last week and aired last night, that "lots of things can happen" with voting by mail if the presidential race isn't decided on election night.

Why it matters, from Axios managing editor David Nather: Trump's comments — which contradict the lengthy history and widespread use of mail-in voting — could be a preview of claims he'd make to undermine trust in the results.

Trump also dismissed the legacy of the late Rep. John Lewis, saying he made a "big mistake" by not coming to his inauguration. Watch.

Did he have his people make up some charts with Windows Paint?

Late Night Says Trump Ran Back to the Comfort of Fox News
Seth Meyers says the president returned “to safe ground” — that is, Lou Dobbs and “Fox & Friends” — after enduring tough questioning from an Axios journalist.

After his interview with Jonathan Swan of “Axios on HBO” went poorly, President Trump returned to the more welcoming turf of Fox News, talking to his admirers on “Lou Dobbs Tonight” and “Fox & Friends.”

“The president stepped out of his right-wing media bubble to do a disastrous interview with Axios, and it went so badly, he immediately ran back to safe ground on Fox News.” — SETH MEYERS
“He basically tried dating other shows and ended up back with his ex: ‘Well, well, well, look who came crawling back.’” — JIMMY FALLON
“At this point, ‘friendly side of the aisle’ just means anyone who won’t ask a follow-up question.” — SETH MEYERS, on Rush Limbaugh’s wondering why Trump would talk to Axios, which he said wasn’t on “the friendly side of the aisle”
“You know it’s bad when even the president’s allies talk about him the way a parent would warn a child to stay away from strangers. They talk about legitimate journalists like they’re pulling up outside the White House in a windowless van: ‘Psst! Hey, kid, you want to do an interview? Tough one? Follow-up questions?’ [As Trump] ‘My friend Sean told me not to talk to strangers.’” — SETH MEYERS
Click to expand...

The Punchiest Punchlines (Good Boy Edition)
“Wow, that is beyond a softball interview. That’s how you interview your new puppy: ‘And who’s a good boy? Is it you? It’s you, isn’t it? You’re a good boy!’” — SETH MEYERS, on Trump’s interview with Lou Dobbs
“Yep, Trump went on and on this morning for 53 minutes. Most Americans were like, ‘Hey, if we wanted to hear the president ramble about nothing for an hour, we’d watch the coronavirus briefing.” — JIMMY FALLON
“Months or years? It’s an election, not the results of a Covid test.” — JIMMY FALLON, on Trump’s telling “Fox & Friends” that mail-in voting could delay an election result by months or years
“Yeah, Trump was like, ‘It’s going to take a while. Imagine the time it takes me to walk down a ramp — now double that.” — JIMMY FALLON 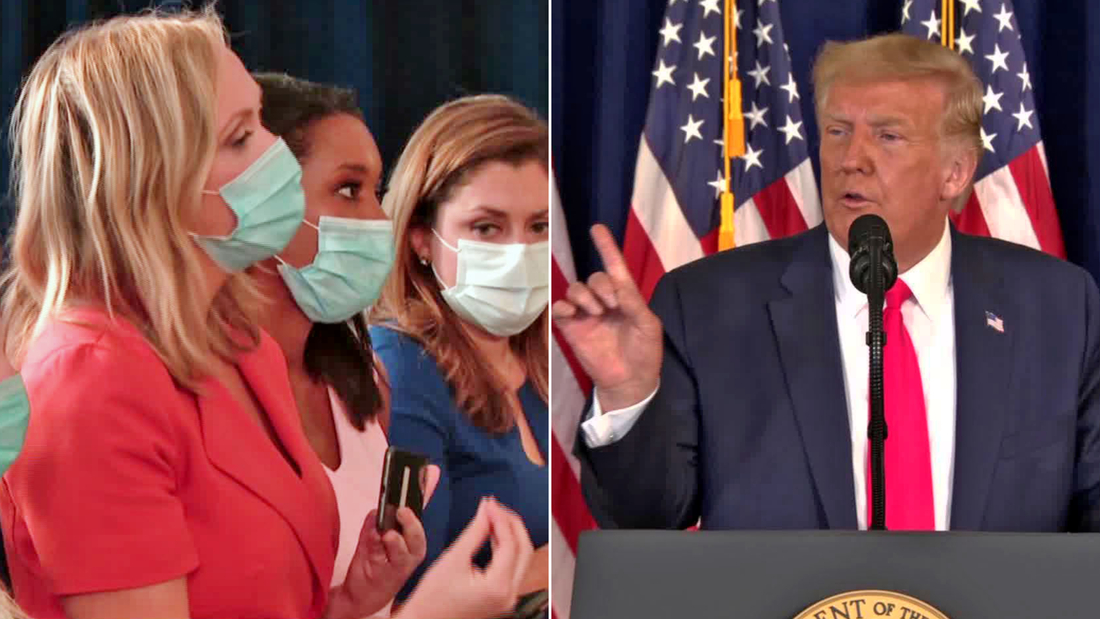 President Donald Trump abruptly ended a Saturday news conference after a reporter challenged him on a lie about veterans health care he has told more than 150 times.