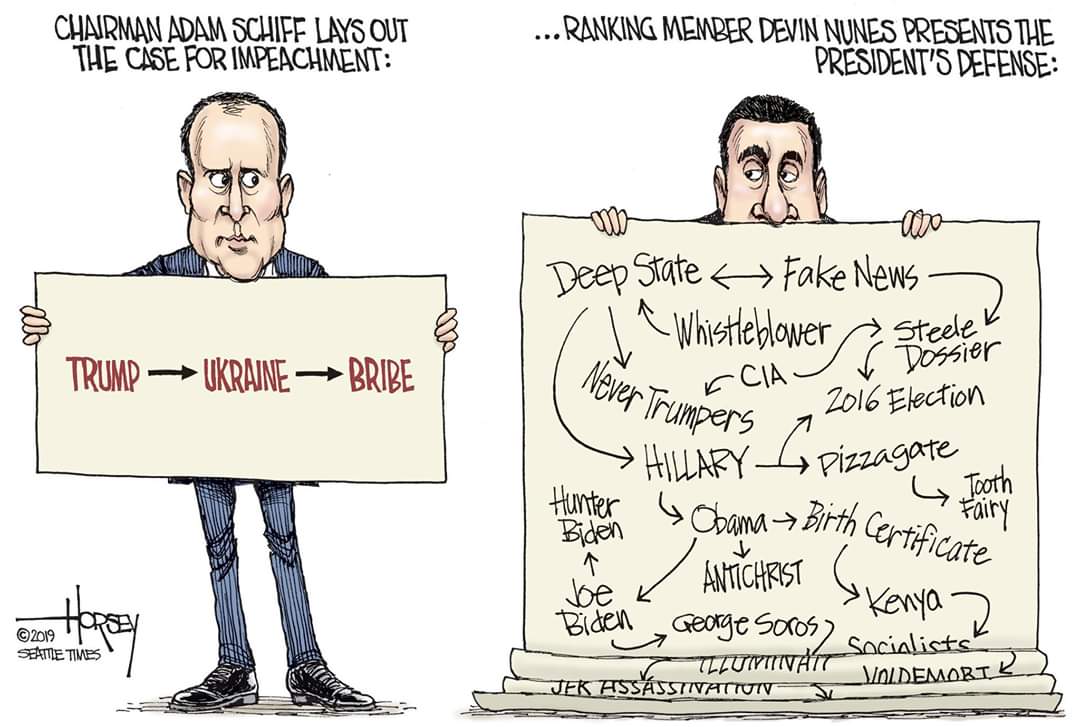 Nunes is a tool

Hill is now describing a key scene, 10 July meetings at the White House in which Sondland told Ukrainians he had a deal with acting chief of staff Mick Mulvaney for a White House meeting for Zelenskiy if the Ukrainians announced investigations of Burisma/Bidens.

Yesterday Sondland said he did mention investigations in these meetings but he couldn’t recall naming Mulvaney or specifically saying “Burisma” or “Biden.”

In contrast, Hill has no doubt about what she heard.

“I listened very carefully to ambassador Sondland’s testimony,” she said.

“The meeting had initially been scheduled for about 45 minutes to an hour. It was definitely in the wrap-up stage at this point... Danylyuk was talking...we’d also wanted to [talk] energy sector reform... and then we knew that the Ukrainians would have on their agenda inevitably a question about a meeting...

“Amb Bolton was trying to parry this back.. it’s not Amb Bolton’s role to start pulling out the schedule...and he does not as a matter of course like to discuss the details... then Amb Sondland leaned in, basically to say ‘Well, we have an agreement that there will be a meeting if specific investigations are put under way.”

Then Hill saw Bolton stiffen, look at his wristwatch, “and basically said ‘Well, it’s really great to see you, I’m afraid I’ve got another meeting’.”

Sondland had not specifically said Burisma or Mulvaney yet, Hill said – “It was unclear who arranged the agreement” – but then the group went to a downstairs room for a debrief.

“Later [Sondland] said that he had an agreement with chief of staff Mulvaney that in return for investigations that this meeting would be scheduled.”

Investigations of what nature?, Goldman asks.

“He said investigations in Burisma.”

Then Bolton told Hill to go to NSC lawyer John Eisenberg, she says.

“Specific instruction was I had to go to the lawyers... [he said] ‘You tell Eisenberg that I am not part of whatever drug deal that Mulvaney and Sondland were cooking up’.”

Did you know what he meant by ‘drug deal’?

“I took it to mean investigations for a meeting.”

Did you go speak to the lawyers?

Did you relay this?

“I relayed it precisely.”

Testimony about the Sondland-Trump phone call that was held on an unsecure phone in the middle of a restaurant in Kiev, loud enough for parties to hear both sides of the call.

“Is this the conspiracy theory you’re talking about”, Goldman asks Hill?

Does that mean Trump ignored senior officials who told him that Crowdstrike was a conspiracy theory and listened to Giuliani instead?, Goldman asks Hill.

“That appears to be the case, yes,” she says.

That the Republicans defense will be 'Yes it happened, but it doesn't matter' is crazytown

Ms. Hill criticized Republicans on Thursday for propagating what she called a “fictional narrative” that Ukraine, not Russia, meddled in the 2016 elections, denouncing a theory embraced by President Trump.

She argued that the story was planted by Russia and dangerously played into Moscow’s hands, by sowing political divisions in the United States that adversaries are eager to exploit.

“These fictions are harmful even if they are deployed for purely domestic political purposes,” said Dr. Hill, the co-author of a 500-page book analyzing the psyche of President Vladimir V. Putin of Russia.

“President Putin and the Russian security services operate like a super PAC,” Dr. Hill explained. “They deploy millions of dollars to weaponize our own political opposition research and false narratives. When we are consumed by partisan rancor, we cannot combat these external forces as they seek to divide us against each another, degrade our institutions, and destroy the faith of the American people in our democracy.

The impeachment inquiry centers on the accusation that Mr. Trump withheld a White House visit for Ukraine’s president and security aid for the country as leverage to push the government to announce investigations into Mr. Biden Jr., and the claim that Ukraine conspired to help Democrats in the 2016 election.

“In the course of this investigation, I would ask that you please not promote politically driven falsehoods that so clearly advance Russian interests,” Dr. Hill said. “These fictions are harmful even if they are deployed for purely domestic political purposes.”

Without naming Mr. Trump, Dr. Hill made an implicit rebuke of his conduct.

“If the president, or anyone else, impedes or subverts the national security of the United States in order to further domestic political or personal interests, that is more than worthy of your attention,” Dr. Hill said. “But we must not let domestic politics stop us from defending ourselves against the foreign powers who truly wish us harm.”

Bernnie Federko said:
Foreign intelligence agents must be having a field day with the Trump impeachment testimony
Click to expand...

I was thinking that. Shit they must be having a field day in general with all this incompetence and fuckery going on...

The Kid said:
I was thinking that. Shit they must be having a field day in general with all this incompetence and fuckery going on...
Click to expand...

People in the 5 eyes must be thinking "shit, maybe we need to go down to 4 eyes? One of us can't be trusted anymore"

So fucking disappointing. What a bunch of spineless fucks. You'd think the GOP would be leaping at the opportunity to dump Trump, this is their fucking shot: 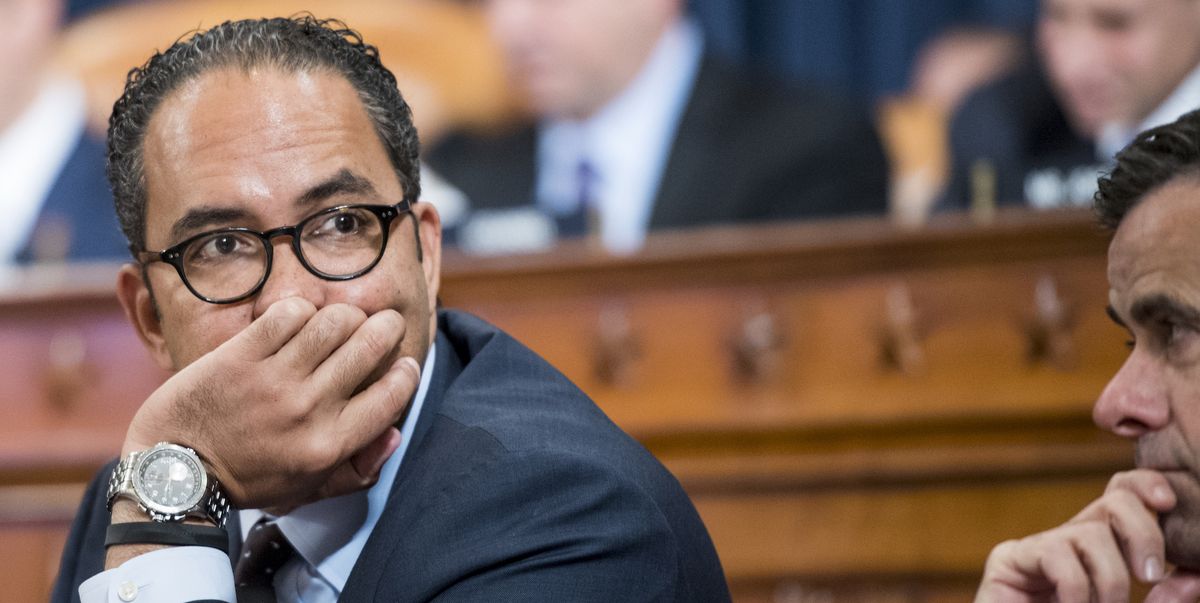 Will Hurd Is the Biggest Disappointment of All. His Performance Was a Preview of the Senate Trial.

There is no Republican who will vote to remove the president*. The prion disease has now eaten away all of the party's higher functions.

Graham et Al are beta chav stooges for opening an investigation into Biden & the Ukraine. Pathetic.

Devin Nunes was involved in all of this, according to Parnas, and he's willing to testify.

Pompeo and Guiliani on the phone talking about the Biden investigation.

Again, Trump might get off from the senate, but the Republicans are going to get savaged in 2020. Look at how nervous Pompeo is about his trying to get his seat back in Kansas and his early re-election bid.

el presidente Highsteppa said:
Devin Nunes was involved in all of this, according to Parnas, and he's willing to testify.

Pompeo and Guiliani on the phone talking about the Biden investigation.

Again, Trump might get off from the senate, but the Republicans are going to get savaged in 2020. Look at how nervous Pompeo is about his trying to get his seat back in Kansas and his early re-election bid.
Click to expand...

One can only hope

Trump stands down on SEAL fight

The Navy has been notified that the White House will not intervene to stop a disciplinary proceeding that could cost a SEAL his position in the elite unit, AP reports this morning.

The backstory: Secretary of the Navy Richard Spencer "and the admiral who leads the SEALs have threatened to resign or be fired if plans to expel a commando from the elite unit in a war crimes case are halted by President Trump," the N.Y. Times' Maggie Haberman, Helene Cooper and Dave Philipps report.

The Navy secretary said yesterday on the sidelines of a security forum in Canada, per AP: "I need a formal order to act ... I don't interpret [Trump's tweets] as a formal order."

Gallagher was acquitted of a murder charge in the stabbing death of an Islamic State militant captive, but a military jury convicted him of posing with the corpse while in Iraq in 2017.

Bernnie Federko said:
Fan, although the bigger concern for me is the type of fruit as well as the type of yogurt.

Glad I asked. Can’t be too careful. Wanna go on ahead and fire your requests up to Marjory in Team Development? She’ll make sure we have you covered for the brunch meeting.