Some constructive feedback - nobody will listen:

"The bad news for Trump is that, unlike when he was a CEO, as a president he is in charge of a vast government bureaucracy that is crucial in both informing, shaping, and later implementing his strategic ideas and priorities. Early on, the administration tried and failed to shortcut this process by relying on a very small number of aids while keeping the majority of the government in the dark. Unsurprisingly, this backfired and led to a series of early unforced errors such as the failed travel bans rollout. McMaster’s arrival, and the close relationship that developed between him, Secretary of State Rex Tillerson, and Secretary of Defense Jim Mattis allowed the administration to sharply improve the quality of the decision-making process, as witnessed by the rigorous preparation and execution of the Syria bombing. As Josh Rogin reported, there is a “structure” of decision-making emerging that was present not just in the case of the Syria decision, but also in the administration’s recent moves regarding NATO and North Korea.
...
None of these reforms could guarantee a successful foreign policy, of course, but adapting the U.S. government in small ways to the emergent strategy style preferred by Trump would at least give the administration a better chance to put together a successful foreign policy legacy. At the end of the day, it will be up to Trump and his top advisors to make the tough learning and adjusting decisions needed to succeed by using this emergent strategy style of leadership."​

Just the guy you want fixing things - but her emails, right!? Anyway, maybe thats what he'll do, "fix" things, like, scare-quote "fix", not like, real fix.

"Phillips worked in an area of investment banking that was highly lucrative and highly predatory. The basic scam in the subprime world in particular was buying up mortgages from people who couldn't possibly afford them, making those bad mortgages into securities, and then turning around and hawking those same mortgages to unsuspecting institutional dopes like the Chinese and Fannie and Freddie.

Phillips had a critical role in this activity. As Morgan Stanley's ABS chief, he was among other things responsible for liaising with fly-by-night subprime mortgage lenders like New Century, who fanned into low-income neighborhoods and handed out subprime mortgages to anyone with a pulse.

In a 2012 suit, a group of Detroit-based borrowers accused Morgan Stanley of discriminatory practices, claiming the bank helped New Century target minority areas with predatory loans. One Morgan Stanley due diligence officer, Pamela Barrow, joked in an email about how to go after borrowers.

"We should call all their mommas," Barrow wrote. "Betcha that would get some of them good old boys to pay that house bill."

Phillips was named in the suit and quoted in the complaint. He said that New Century was "extremely open to our advice and involvement in all elements of their operation."

The worst actors in the financial crisis worked in this shady world involving the creation of subprime-backed securities.

Of those bad actors, there is a subset of still-worse actors, who not only sold these toxic investments to institutional investors like pension funds and Fannie and Freddie, but helped get a generation of home borrowers – often minorities and the poor – into deadly mortgages that ended up wiping out their equity.

Phillips, who helped Fannie and Freddie into substantial losses and worked with predatory firms like New Century, belongs in this second category. As Beavis and Butthead would put it, Phillips comes from the "ass of the ass."

Donald Trump, then, has essentially picked one of the last people on earth who should be allowed to help reshape the mortgage markets. This is like putting a guy who sold thousand-dollar magazine subscriptions to your grandmother on the telephone in charge of the Consumer Financial Protection Bureau, or the A.A.R.P.

More foxes for more henhouses. Welcome to the Trump era. "​

JamesM said:
I prefer folks to get to the point and not beat around the bush endlessly.
Click to expand...

That's rich, for someone who has threatened to leave Tribe on numerous occasions.
We prefer folks to bring valid discussion and relevant articles instead of plaguing threads with nonsensical videos and your mindless banter.

ndrwrld said:
That's rich, for someone who has threatened to leave Tribe on numerous occasions.]
Click to expand...

Yeah because you guys are dickheads.

I will say this - he's catching up in our BPL fantasy league. So some decisions have been alright lately.

JamesM said:
Yeah because you guys are dickheads.
Click to expand... 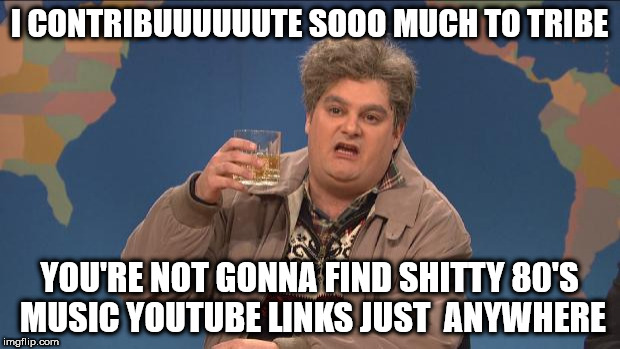 Trump blames constitution for chaos of his first 100 days

WHC Dinner. No POTUS. Poor little fuck can't even muster up the balls to attend a free dinner that essentially, celebrates the 1st amendment.

Yep, antifa cucks have ties to all kinds of weird sick shit

Ps. Speaking of cucks what is it about far lefties and them being actual cucks

Hey, you're the one that likes to beat off to kids saying 'cuck', you even said it yourself Speshul Kkk(uck)

WHY DO DENY PIZZAGATE BRO

The conservative reaction to Michelle's healthy food program was one of the best places to see thier hatred dripping from deep inside their tiny minds - no one in their right minds would really pick a bone with a program like that.

See? That train is never late! Record response time too!

Speshul KKK(uck) - you never deny the beating off to kids thing. Why is that?

It's so easy to press your buttons KKK(uck) - you always show you're angry by copying everyone else and typing a response that your fingers can't keep up with your anger.

LOL - what's making you so angry? Was the goat you had your eye on in your village married off to your village elder?
S