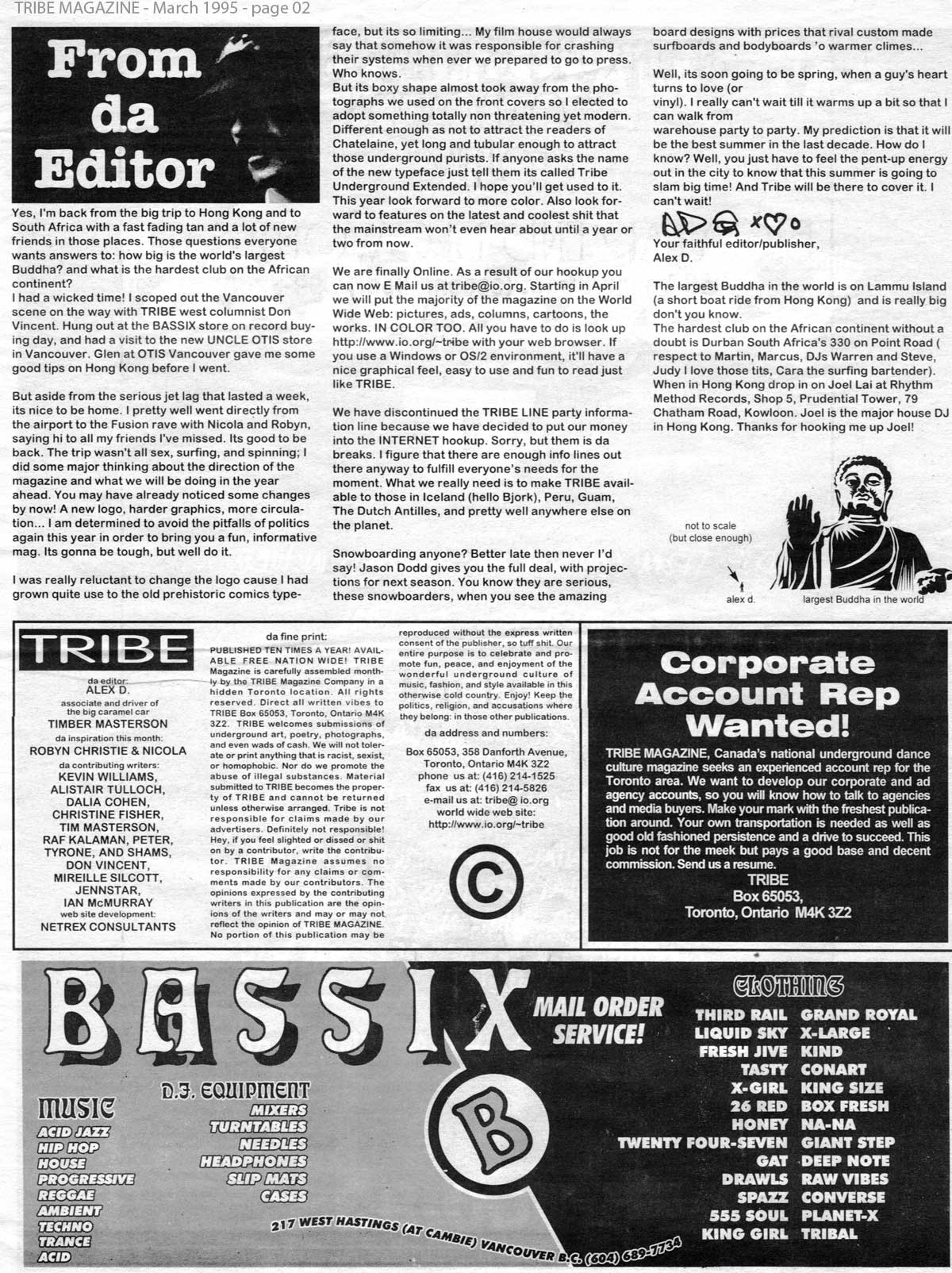 Staff member
Since it is our 20th anniversary this year, I am going to dig into the archives and pull out some pictures and things from our history and drop them into TRIBE 20th Anniversary threads on the site. I am going to create separate threads for this.

Above is a scan of my editorial from the March 1995 issue of TRIBE, issue #17, spelling mistakes and all.

I had just returned from a 2 month jaunt to South Africa via Hong Kong, taking the the long way around the globe. While in South Africa, after a memorable night at 330 in Durban (South Africa's version of INDUSTRY) with 2 hot bartenders who I photographed wearing TRIBE baby Ts (I'll look for that image), I decided to take the magazine online with a site on 'the world wide web'.

TRIBE already had a presence as a small Bulletin Board System for a year already, but since not many people were BBSers or even online back in 1995, we weren't getting very much traffic except for those few geeks around the world who were looking on bulletin boards for information on Toronto. The web was very, very new, and TRIBE was one of the very first, if not the first, in Canada to take a magazine into that space.

The internet was really new back in 1995, but fortunately, 2 fans of TRIBE, Hubert K and Darren had access to (or were themselves) one of Toronto's first Internet service providers. They lived in a warehouse space across from the Fire Station on Adelaide St. West, near the limelight. You know the building.

Their living area was filled with computers, machines with their covers off, insides hanging out. Monochrome monitors streamed endless lines of code in the dark, and every so often sirens would go off as a fire truck pulled out of the station across the street.

I remember asking Darren what the internet was and he pointed to a wire running next to their door, going up through the ceiling.

I asked him what the other wire was running next to it and he told me it went to the door bell, which I thought was pretty hilarious at the time. Still do, actually.

I grasped the impact of the change that would happen eventually once big players became involved and when millions more people got online, but at that point in time the internet was like Mars: barren, rocky, empty, which seemed to me to be a perfect place for an underground magazine.

what happened to this thread? was looking forward to moar.

JamesM said:
what happened to this thread? was looking forward to moar.
Click to expand...

I will starting individual 20 year anniversary threads over the course of the year with different stuff in each.

haha @ investing in this internet thing over information lines

Well, some chose information lines deep! Not me though.
M