Staff member
Pointing a herd of heavily armed police, horses, dogs, cyclecops, and even STAR security (no concerts) at 17 homeless people in a caged space, what the fuck. Thank god photographers got in there to capture it, even though the City tried to suppress journalist access, which is a significant separate issue entirely.

Mike Layton, Joe Cressy, John Tory, all of them. It's an obscene abuse of political power. Now they are all backpedaling and trying to blame each other to diffuse public anger. John Tory claiming not to have seen the video. A fucking shell game, not owning up to their horrifying actions.

Mike Layton was crowing about the "Jack Layton Activism Award", after he sent the police there and they were breaking a woman's bones. I don't even know what to say. No, I do: HYPOCRITE . He's certainly not his father. I have a nomination suggestion for the Jack Layton Activist Award, below.

Mike Layton wants to call a commission of inquiry into why he sent police down to beat up homeless people? These politicians have been in office far too long.

Someone at a film company likely called Joe Cressy because they needed Alexandra Park and other parks for filming political campaign ads or whatever, the councillors all got on the same page, and ordered in the police down there with sticks to beat them up and chase them away. Presto! A nice empty park for filming, which is happening even now. They didn't even wait a day for the smoke to clear before fencing the park of for a video shoot.

I don't want my property taxes going to these stupid actions. 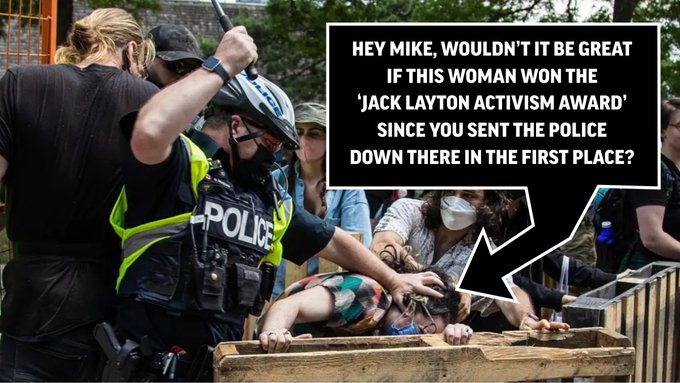 Staff member
All of us here know that City Council sent police down to clear out the homeless and it had the pictured result. That woman was actually hospitalized. Many people were hurt. This was the third park clearing with some days in between each and there was time to stop it before it happened. A call to the police chief from any Councilor likely would have stopped this happening.

Our municipal politicians mustn't be beating up the citizens. We don't have to put up with this kind of sick behavior from them. We can speak out against this shit, and so this is what I am doing. The councilors will blame each other now this is getting so much bad press, or blame the mayor, in a rotating attention shell game to confuse and distract the public and remain unaccountable, in the same way a squid shoots ink into the water so it can slink away back into the crevice it lives in. But I'm holding my own City councilor, Paula Fletcher responsible. I won't let people forget.

Paula Fletcher has ruled my Leslieville riding for decades while she let police budgets grow, she filled police armories to the brim with military gear. Apparently the largest line item in the Toronto budget now is police. Armored vehicles, sound cannons, horses, tasers, grey police cars with hidden markings, rubber bullets, military riot control gear, drones, black helicopters (probably rentals) and most importantly, chemical weapons, which were actually used on our community during the G20 to gas journalists and Leslievillans trying to exercise rights of free speech and expression or were trying to visit family members who were being kept in cages. At the foot of Carlaw, IN HER RIDING. Remember the foot of Carlaw & Eastern Avenue? People getting shot in the face with rubber bullets, officer bubbles?

And let's not forget she allowed the internment camp to be built in my community in the film stage areas on Eastern, where Torontonians were kept in cages. THIS IS AN ETERNAL STAIN ON MY COMMUNITY. She hopes people will forget this. I won't let people forget. No, Paula Fletcher has been in power long enough. There are lots of smart young people in our community (I'm not young, smart, OR running BTW).

Let's move past her and give someone else a chance to make our city and community better. If we don't, these incumbents' death grips on power will ever tighten and these kind of Belarusian nightmare events will happen more frequently.

Let's seize this opportunity to plot a better Toronto with new representatives with fresh ideas and less deathgrip on power.