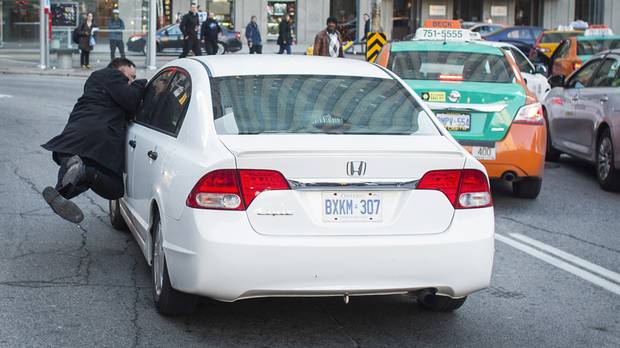 This whole belligerency thing with cab drivers, WTF? Attacking random people driving cars downtown, and regularly turning bike lanes into taxi ranks downtown really has to stop. Shutting down the core by parking cabs in the middle of the road... Are the police doing anything about them?

Toronto taxi drivers acting like idiots? Hardly news.
From my time biking around toronto I could give you 1000 examples.

Re: Protesting in general
I'll play devil's advocate just for a second and then make some other points:

In order to get any issue to the forefront, people disrupt, people make noise, and sometimes people get so frustrated that they start doing stupid things that cross those lines. By then every news station picks it up, it's the talk of the town, and gets posted on message boards. I'm not surprised by their actions...


Re: What they're actually protest about
What I am surprised about is that they're going after Uber at all. Who the fuck are they kidding? Their own industry needs a shake up and they should protest THAT. Like I posted in an earlier thread...

Some of the current posts:

Are you kidding me???

Then we have this front page story in the star: Taxi drivers protest against UberX | Toronto Star

“This job is like fishing, right?,” Tsering said. “So just imagine on Lake Ontario there are boats with permits to fish. What if people come with their own boats and fish around? It's the same thing.”

Tsering, who has driven for eight years, said the weaker Canadian dollar has made it even more difficult."

YOU GOT IT WRONG, MUTHAFUCKAAA - Here, I fixed it.

It's like "Imagine on Lake on Ontario there are boats with permits to fish. Those boaters rent those permits from private individuals and get to keep 20% of the fish that they catch to feed their families. Also, in some cases they had to buy the boats from the permit holders who also happen to own the boat dock and the boat repair shop that charges 20% over market value to fix your boat. If you want to buy the permit then it's $130,000 (It used to be $320,000 3 years ago!)."

People fishing without licenses are going to shake up their industry and bring them up.

What other industry on this fucking planet runs like this???

Staff member
"As thousands of Toronto cab drivers clog the streets to protest Uber, they fail to realize they are losing customers mostly because they offer inferior service." - The Globe and Mail
R

They are absolute morons. They are too stupid to even get out of their own way.

Do they really think that blocking busy city roads/highways, refusing to pick up fares (nothing new actually), chasing down random cars on the street only to be dragged 20ft is endearing themselves to their cause?

They don't get it - it's not about money or even Uber for that matter. People in the city who (like myself) take cabs a lot are SICK OF their horrible service. Their outright refusal to let you into their car unless you tell them where you're going & they feel it's worth their time. Their poor to zero knowledge of the city & how to get around. The disgusting shape of the vehicles, inside & out. The awful smells in 90% of the cars I've been in & their surly demeanor. The way they feel the need to talk to other drivers/family on their headsets when you're in the car. Their lack of care for the rules of the road, bike lanes...you name it!

The way they acted at City Hall about 15min ago was deplorable. I felt like I was in the middle of the Egyptian uprising it was such savagery. Reporters pushed over, another man had to be escorted away by police for his own safety because he was supporting Uber. it was crazy!

They walked in and stole the trucking industry, etc with no resistance. They contract out for twice as less and run it through mosques in order to pay no taxes. Putting Canadian companies out of business.

Now they are getting displaced by cheaper rides, and this is the backlash when they can't get their way. I know it's not as cut and dry as that explanation.
I

Good on the car driver for not hurting anyone and keeping their cool. If that had been my car it would have probably ended differently.

It is lousy behaviour though. 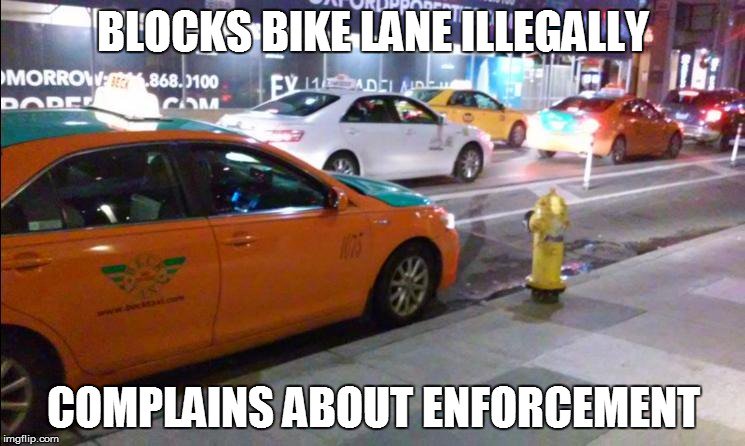 Staff member
Then there's this:

What about the cop on his bike that was taken to hospital because he was hit by a protesting cabbie??

"In one incident, a police officer on a bicycle was taken to hospital with minor injuries after being struck by a cab taking part in the protest at Yonge Street and Manor Road, police said."
R

I guess cabbies don't have to keep their fair distance from a fire hydrant or maybe the yellow paint needs a refreshing, they might not have been able to see it with the glare from the white bike stanchions

Apparently Beck Taxi and the Taxi Alliance were not in favour of this protest. So it was mostly the drivers themselves who organized.

Not all cab companies threw their support behind today's protest.

Kristine Hubbard, operations manager at Beck, asked her drivers not to participate in the demonstration but she called on Tory to address the issues concerning taxi drivers and Uber.

The Toronto Taxi Alliance (TTA) is not involved in organizing the protest but said it "supports the aim of the demonstration, which is to encourage the City of Toronto to enforce the law with Uber's illegal operations."

The TTA added it "does not support any tactic which will disrupt traffic or transportation for Toronto drivers and residents."

Uber driver James Green told CBC News that this morning's protest by cab drivers has prompted some of his customers to turn to Uber for the first time.

"They're playing right into the hands of Uber," he said.
Click to expand...

So far the guy comparing Uber to ISIS takes the cake, LOL.
H

Why did police not ticket the hell out of the taxis today? As I drove northbound on the DVP this morning, I drove past the DVP southbound protest. Wtf! They were literally going at a crawl.

Saw the video of this. Darwin award winner right here, he's lucky he didn't get killed. This cabbie was punching the white car so the white car sped away. The guy chases the car down and held on to the car while it was moving. I hope the driver of the white car press charges. We now who the cabbie is because he gave an interview right after and gave his name. lol

Staff member
These knuckle draggers squandered any last bit of sympathy they might have had from Torontonians because of their actions today.

I have yet to read a single sympathetic posting or note towards the cabbies, other than the city politicians that are in their pocket.

Well high school's post doesn't even resemble anything intelligent. But I guess we're used to that.

JamesM said:
Well high school's post doesn't even resemble anything intelligent. But I guess we're used to that.
Click to expand...

clearly it has done the exact opposite, and as was pointed out, the only ppl who care are the ones on council who clearly have been bought and paid for by the lobbyists for the taxi industry

his post was quite valid, yours on the other hand, made zero sense

You should have just said, like the Ontario Lieberals blow chunks, and be done with it.

ok, so at least now we know that you're not going to continue this fucking mess just because you're drunk, but in reality, you are a Troll...or both, who knows.

Pres and BBJ's posts made perfect sense.
yours was not only making no sense, but in an attacking manner towards them both.

who shit in your cereal ?
you just can't stop, can you ?
trying to have a simple conversation with you on here is impossible, and anyone else trying to have a conversation with anyone else other than you, becomes a lesson in futility, because it's only a matter of time before you inject yourself into it, and we all know what happens then, don't we ?

you really need to get your head checked.
and stop bringing up the fact i tried sticking up for you. i made an error there that i really regret.