Tom Cruise-Katie Holmes give birth to a baby girl

The spawn of Cruise

I wonder, did Tom make sure that "Suri" was approved by the High Council?
O

[FONT=arial,helvetica][SIZE=+1]Cruise, Holmes Have Baby Girl Named Suri[/SIZE][/FONT]
[FONT=arial,helvetica][SIZE=-1]Tue Apr 18, 6:51 PM ET[/SIZE][/FONT]
The Tomkitten has arrived. Tom Cruise and Katie Holmes, the high-profile pair dubbed TomKat by the media, had a baby girl Tuesday, said Cruise spokesman Arnold Robinson. The baby, named Suri, weighed 7 pounds, 7 ounces and measured 20 inches long, he said.
"Both mother and daughter are doing well," Robinson said in a prepared statement.
The name Suri has its origins in Hebrew, meaning "princess," or in Persian, meaning "red rose," the statement said.
The baby was born in Los Angeles but the exact location was not disclosed.
It's the first child for Holmes, 27. Cruise, 43, has an adopted daughter and son from his marriage to Nicole Kidman.
Details surrounding the birth, which was planned under the tenets of the Church of Scientology as a silent procedure, weren't disclosed.
Outside the Beverly Hills home where Cruise and Holmes live, about a dozen reporters and photographers stood by. Security officers inside the compound videotaped the journalists.
A security guard at the gate which was shrouded in black to prevent anyone from seeing in refused to release any information. A few cars did arrive and were allowed into the estate. A police motorcycle officer stopped by around 4 p.m. and sat watching the goings-on.
The patrolman, who identified himself as Officer Chase, said he was just making a routine check, since activity around the area had been heightened for some time. He asked if the baby had been born, was told yes, and drove off.
It was just about a year ago that Cruise's romance with Holmes became a world sensation.
Cruise hopped up and down on a couch during an interview with Oprah Winfrey as he professed his love.
"I can't be cool. I can't be laid-back," Cruise declared at the time. "Something happened and I want to celebrate it."
The antics were widely mocked but Cruise was unfazed and continued to avow his affection for Holmes.
He and Holmes, a star of TV's "Dawson's Creek," had been first photographed together in Rome in April 2005.
She had previously been engaged to actor Chris Klein; Cruise had been married to Mimi Rogers as well as Kidman, and had dated Penelope Cruz for several years.
In June, Cruise announced to a Paris press conference that he had proposed to Holmes atop the Eiffel Tower.
"Today is a magnificent day for me, I'm engaged to a magnificent woman," he said.
No wedding date has been disclosed.


-Haha, and also Brooke Shields gave birth to a girl, but no one cares. I guess Cruise won that publicity stunt.
T

now they have no more need for Katie and will kill her.

lol posted at the same time but you beat me.
K

tom is going to eat the placenta... or may have already done so
N

Ya I'm sure that placenta was washed down with the blood of L. Ron Hubbard (or wine or grape juices or whatever) ages ago.

now they have no more need for Katie and will kill her.

it'll make me sound like an asshole...but...
i really hope holmes gets postpartum depression.

apparently eating the placenta and help with postpartm depression.

Tom Cruise will be the first male celeb to receive full custody of the child after divorcing Katie.

i would like to say that i am NOT retarded and double posted in the same thread.

it is a result of two threads being merged.

ha! Check out her msn name. She's pissed!
I

I just had a brown baby boy.

I think the fact that Brooke has her baby as well on the same day as Kate is pretty funny.
L 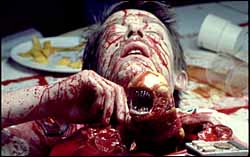