Today's reminder you are a wuss: Legless man climbs Everest 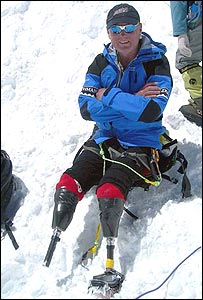 Double amputee scales Mt Everest
A New Zealand mountaineer who lost both legs in a climbing accident has become the first double amputee to reach the summit of Mount Everest.

Mark Inglis, 47, phoned to say he had reached the top of the world's highest peak on Monday and had returned to base Camp 4, his wife Anne told reporters.

He had been carrying spare prosthetic legs in case of an accident, but there had been "no issues", Mrs Inglis said.

Mr Inglis lost both legs beneath the knee after getting frostbite in 1982.

He was scaling Mount Cook, New Zealand's tallest mountain, when bad weather forced him and his climbing partner to spend two weeks in an ice cave. They were barely alive when rescued.

But the accident did not deter Mr Inglis, who continued climbing, became a ski guide, and took a silver medal in cycling at the Sydney Paralympics.

The Prime Minister of New Zealand, Helen Clark, has congratulated Mr Inglis on his Everest achievement.

He set off for the summit in perfect weather early Monday, said Mrs Inglis. From her South Island home, she said he had called to tell her he had made it once back at Camp 4.

She said the phone reception was bad, and she had been unable to ascertain exactly when he had reached the summit, but she guessed that it was about midday.

Mrs Inglis told the BBC she was "extremely pleased" at his achievement, and she'd be "even more pleased when he gets back home".

But in an interview with the news agency AFP before the trip, Mr Inglis said: "I'm not doing this to be the first double amputee - if I am then it's the icing on the cake - but it's more about I've been climbing most of my life and Everest is the achievement really.

"And it gives you the knowledge of empowerment to do other things."
Click to expand...

awesome and inspiring. this is a great man

Mr Inglis lost both legs beneath the knee after getting frostbite in 1982.

He was scaling Mount Cook, New Zealand's tallest mountain, when bad weather forced him and his climbing partner to spend two weeks in an ice cave. They were barely alive when rescued.

You'd think he would have learned from the first time....
T

let's see him do it on his stumps.
E

How bout with his arms. Then what if he gets frostbite on those too? will he drag himself up a mountain with his lips. Now that would be a champ!!!

Thumpr said:
let's see him do it on his stumps.
Click to expand...

I used to complain I had no shoes until I met a man WITH NO FEET!
A

Yeah, but I can still pee standing up.

C'mon guys, this is a tremendous feet that deserves a standing ovation.

That is so inspiring. I'm gonna go cut off my legs right now!
T

i raise you a right forearm.
E

i call that forearm and raise you my left nut. If Lance can do it so can I!

I think everyday I'm going to pick a new hero. Not a hero like somebody who saves a life or even a dozen lives. No a hero who does something countless other people have done to prove he can do it after having disabled himself through his own stupidity and misadventure.

Congrats Mark Inglis, you're Ditto's 'Hero' for a day.
C

man, he could get away with saying so many stupid things without ever sticking his foot in his mouth.

could you imagine having that kind of POWER!?
E

What do you call a man with no legs standing at the top of Mount Everest?

just wait until Matt, Bob, and Art hear about this!!
P

noodle said:
What do you call a man with no legs standing at the top of Mount Everest?

That's like the joke, How do you kill a fox?

cut off his leg and make him run across Canada.
T

headline should read: man with metal legs climbs everest, half as tired as companions.
A