The Toronto Urban Roots Festival (TURF) title is misleading, as inserting the word “urban” into any festival title gives it an odd connotation. Festival founder Jeff Cohen said they considered using the more fitting word “indie” in the title, but felt the name would be too close to another landmark cultural hub in the city, TIFF. Jargon aside, TURF is now in its second year as a Toronto born and raised festival showcases some of indie rocks biggest darlings.

Cohen, the festival’s father, whose day job last weekend at the festival was to introduce the bands with complimentary banter, is part owner of the Horseshoe Tavern, Lee’s Palace, and concert promoter Collective Concerts. As you may or may not have noticed, Toronto has accumulated a few new locally grown weekend-long festivals in the city over the last two years, namely Field Trip and the Toronto Urban Roots Festival. Cohen has worked very hard to ensure that Toronto remains a large music hub. Cohen serves as the Ontario Ministry of Sports and Culture, as well as a stakeholder for the Ontario Music Fund he has developed a strong voice in the scene.

I praise Cohen and company for the amazing music they have brought to Toronto in the two years of TURF’s run. Apparently, Toronto will be hosting the Chicago-based festival Lollapalooza, which will make for greater competition in terms of locking down festival acts and certainly upping the ante for festival standards.

TURF was fairly well organized with three stages across half the space Field Trip occupied with only two stages. To my surprise, big deal acts such as Jeff Tweedy (of Wilco), Jenny Lewis (of Rilo Kiley) and Andrew Bird, played the festival’s West End Stage – a smaller, less used side of Fort York. An even smaller stage was used in a very unsuspecting gully tucked away just south east of the main festival area. The gully made for a beautiful theatre-like setting for people who preferred sitting with perfect sightlines. Smaller acts such as Hollerado, Deer Tick, Joe Pug, and Pokey Lafarge lit up a very unsuspecting space that looked onto the large highway poles and Fort York Boulevard.

With any festival, you have to pace yourself and take it in stride. Three days of music is a lot to take in, no matter how much coffee, drugs, or alcohol you consume. I am surprised and hesitant to read all encompassing reviews of the festival in knowing just how much music was offered at this festival (a good bang for your buck). Beyond the physical layout of the festival and the particularities of its making, I present to you my thoughts of what I saw:

Much to my surprise, Friday’s acts started early in the afternoon with Tift Merritt – a likely poorly attended first act due to normal nine-to-five work schedules. In working a nine-to-five work day, I wasn’t able to make it down for Merritt’s set, however I fortunately was able to catch her playing as a part of Andrew Bird’s band called Hands of Glory. Bird stepped on stage just past five to a bright sunny afternoon sky and the commuter trains whipping back and forth on the Lakeshore line – very appropriate to the Hands of Glory’s rustic-style country sound. Bird played alone for two songs accompanied only by the spinning speaker horn – an instrument that makes Bird’s live performances a unique, lush experience. 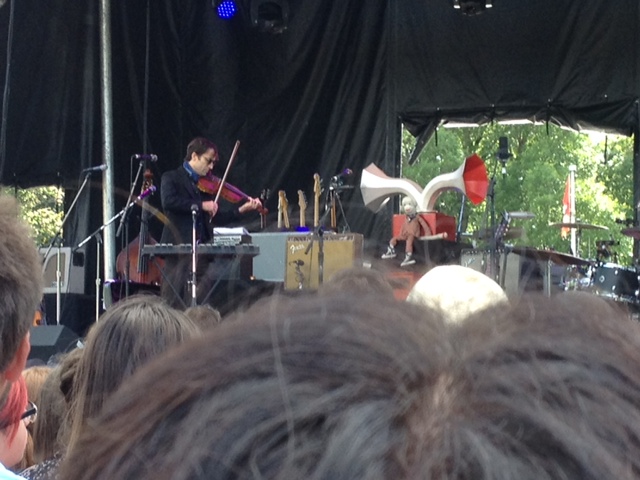 Bird complimented the festival nearing the end of his set saying, “I like this festival, it has good spirit, congratulations.” 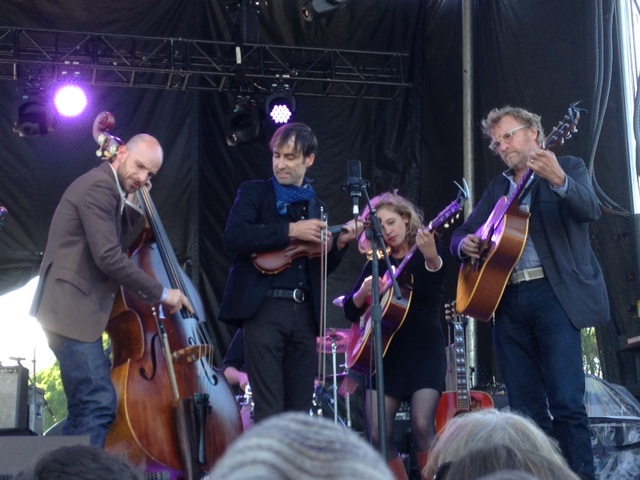 The other standout performance from Friday was the New Mexico native Paris, France transplant, Beirut. In 2001, at the tender age of twenty-five years old Beirut aka Zach Condon released three very strong albums. It’s been three years since Condon’s released anything, but just playing a set drawn from dated material was tremendously well received by the crowd. I was surprised to find The National’s horn section – multi-instrumentalist Ben Lanz and trumpet player Kyle Reznick – to also play with Beirut. Apparently, their permanent members of Condon’s band, a title they have yet to receive from the National. 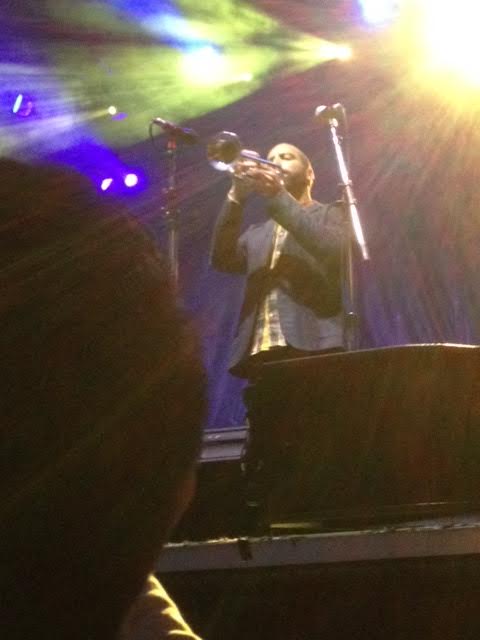 I am constantly surprised by Beirut’s ability to capture mainstream success. With crooner-style vocals and an eastern European musicality, I don’t exactly get the band’s vast likability. Perhaps, it’s Condon’s boyish good looks, or the sweet lyrics. This marked my third time seeing Beirut and second in Toronto – all received by large, dedicated fans. While the band was spot on, Condon seemed to be a bit out of it. Delayed vocals, a polite ask for a drink mid-set – something seemed a bit off with the guy. 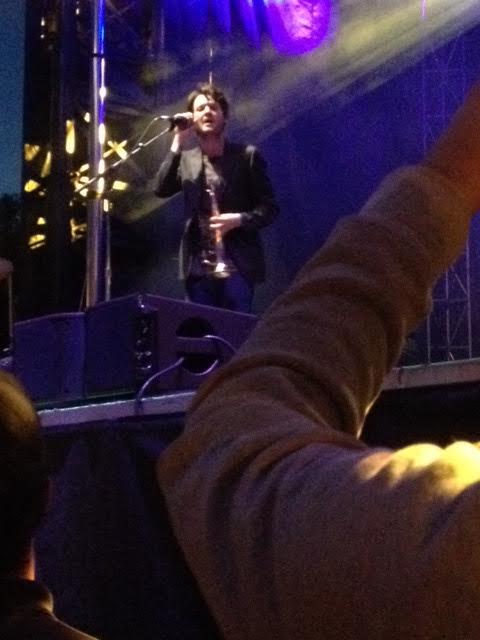 Saturday was a light day for concerts catching only Newfoundland gems Hey Rosetta! Drawing from a catalogue of lush, orchestral-tinted indie rock songs, their show was eloquent and light hearted. I chuckled to myself with the bands closing song “A Thousand Suns” – an overly Canadian song with lyrics that read “Everyone around wants to give you their thanks.” 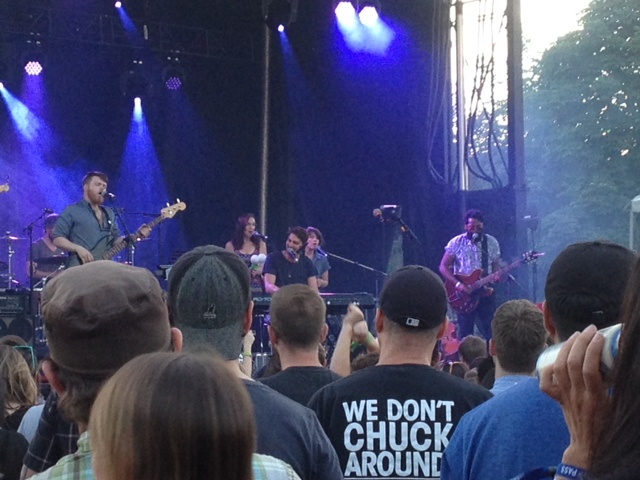 Sunday started with Jenny Lewis, in my view, was the finest set of the festival. Lewis, at the ripe age of thirty-eight, looks and acts as young as the first time I saw her eight years ago (!!!). This Toronto stop was in support of her new album The Voyager produced by heavy weight Beck Hansen (aka Beck) and is to be released later this month. Beyond playing the tunes, she embodied the album in her physical attire – an airbrushed, magic pony-like design complete with stars and rainbows. She wore this design on her t-shirt complete with white pants and matching designed boots and nearing the end of her set, she whipped out a matching guitar. Very aware she was over the top Lewis acknowledged that she resembled an adult clown. 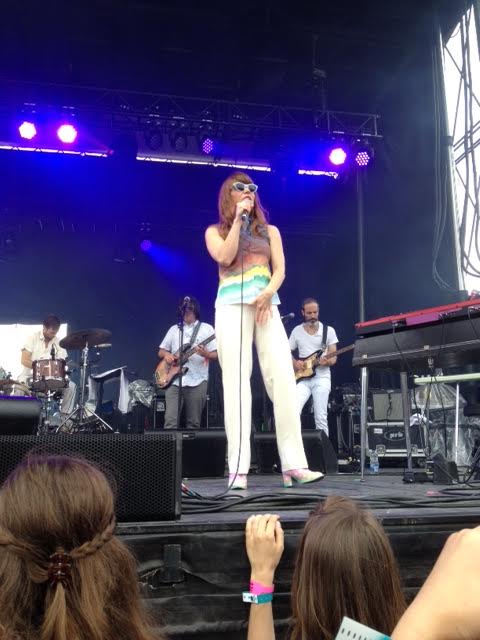 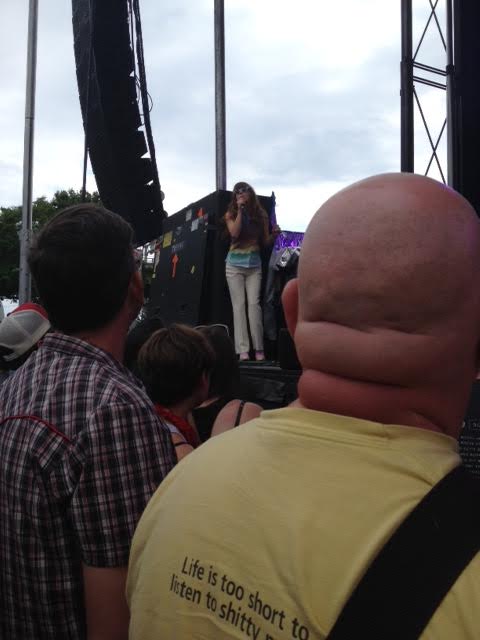 Despite heavily pushing her new album, she included many crowd pleasers from fifteen year career in music. She notably played several tunes from the cheeky Rilo Kiley album Under the Blacklight and even introduced one of those tunes as an old tune from 2007. A standout tune served in multiple parts is the song “The Next Messiah” from the 2008 album Acid Tongue. She also played the tune “A Better Son/Daughter” from the 2002 album The Execution of All Things, which probably received a slight resurgence from first season trailer of Orange is the New Black 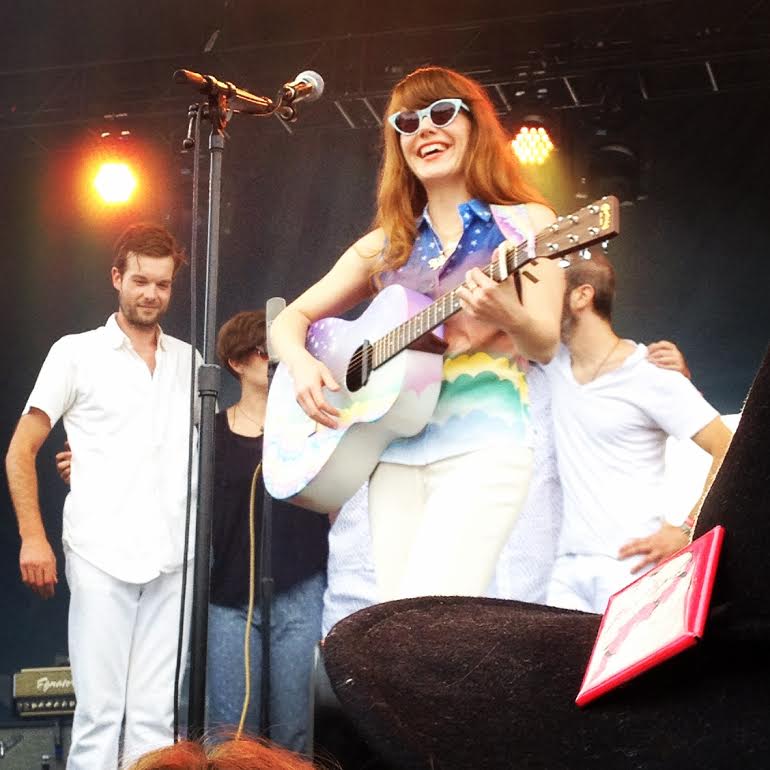 Tweedy, comprised of Wilco’s Jeff Tweedy and his eighteen year old son Spencer Tweedy on drums, plus a full band played shortly after Lewis. As one of the more established acts at the festival there was a sense of comfort and ease in the band’s performance. I’m not much of a musician, but Spencer Tweedy sounded excellent playing tunes from the forthcoming album Sukierae under the moniker Tweedy. Tweedy made small talk about playing with his son saying that with solo albums the artist is expected to play all the instruments, Tweedy continued to say that this album has been eighteen years in the making in growing his son. I’m sure this has either become or will become the regular banter, but it sure was sweet. Part way through the set Tweedy acknowledged the band’s presence before the start of the tune “Low Key” by detailing the band’s pre-show ritual of a communal shrug. Again, more catalogue banter, but ever so endearing. 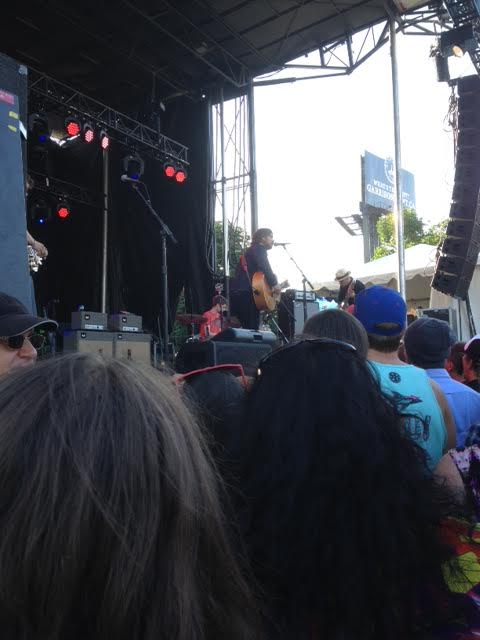 The band stayed on for all Tweedy tunes, but exited the stage for the last half of the set allowing room for Tweedy to play some well-loved Wilco tunes, such as “Hummingbird” and “I Am Trying to Break Your Heart.”

Neutral Milk Hotel closed out the festival’s main stage to a very mixed audience. Standing in the VIP area, fans were physically there, but not mentally there. I’ll be the first to admit, hanging out at a festival for three days is challenging and surviving one day is a great feat. Sadly, with such a niche band like Neutral Milk Hotel, I had high expectations for the gig based on my past experiences seeing the band, particularly the crowd. Much to my disgust, the crowd was filled with people talking over the set and countless comments about the band’s dorky appearance. The band was in good form in terms of spirits and sound. At the beginning of the set Mangum politely asked the audience to put away their cell phones… A bit reminiscent of this TURF’13 moment.

Nearing the end, I felt grumpy and ready to head home. I was pleasantly surprised by the Ottawa band Hollerado’s energy and enthusiasm closing out the festival at the smallest stage. It was my first time really soaking in the band’s sound, nothing I’d really take home and listen to. They managed to win my heart over with their sheer excitement and ability to genuinely hang out with the crowd. For the band’s final song, singer Menno Versteeg asked the audience if anyone could play guitar and quickly added on anyone who knew the final song. He called one of the few eager fans who admitted to both knowing the song and being able to play the guitar to the stage giving him his guitar. Versteeg proceeded to sing sans guitar. A really great pick-me up to the very underwhelming Neutral Milk. 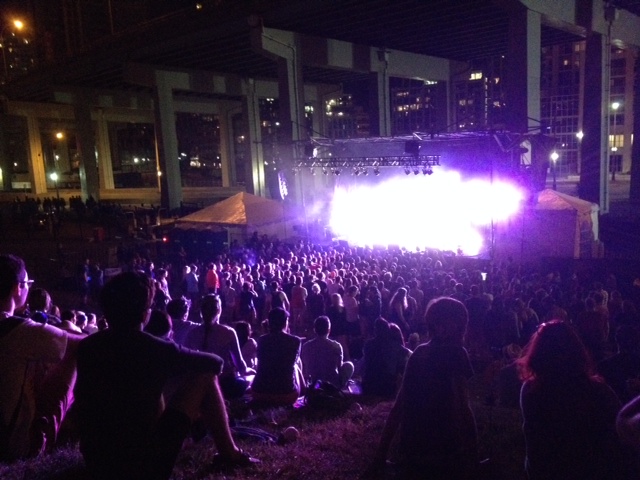 Really wish Violent Femmes could have played a headlining show while in town rather than playing TURF.

Would have gone in a heartbeat.

That's exactly how i feel about The Cure playing Riotfest.
They would have sold out any number of venues.
F

I feel as though festivals are easier for the bigger acts. OutKast did the very same thing - festival dates galore, no independent shows.
T

forthetrees said:
I feel as though festivals are easier for the bigger acts. OutKast did the very same thing - festival dates galore, no independent shows.
Click to expand...