The Ike Eisenhower steak grilling method - this I gotta try... 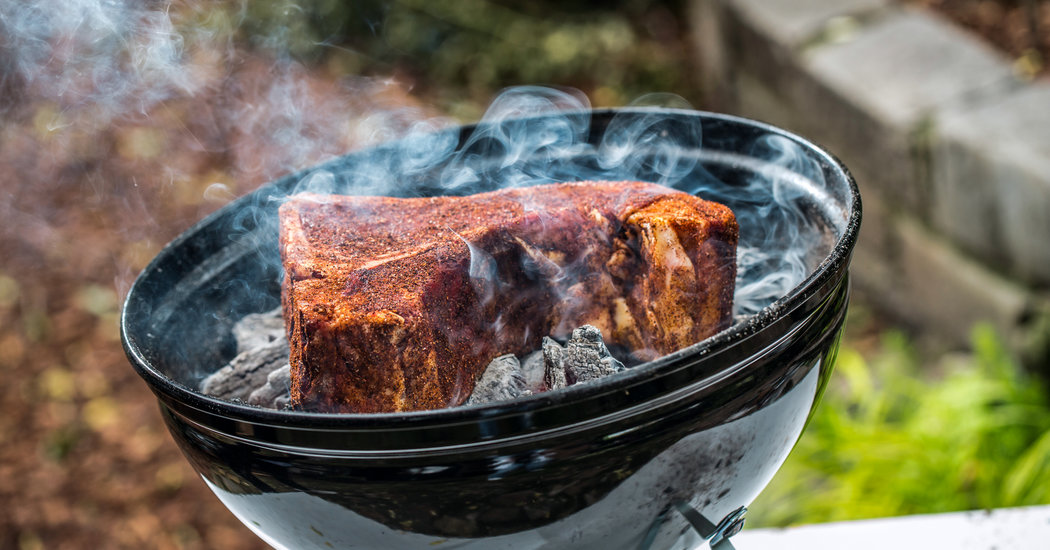 For a Better Steak, Cook Directly on Charcoal

We’ve never been the kind of guys to worship outdoor grilling gear and technology. When we were growing up, Dad set the tone, making do with a rusty hardware store hibachi and a metal chimney. We’ve written about the ascetic thrill of using government-issue grills in state parks.

But recently we picked up a trick from a Dallas chef that has rocked our minimalist approach to its foundation: We cook meats directly on the coals.

No, the precious porterhouses do not incinerate, even though the heat is consistently 800 to 1,000 degrees. The char is robust and earthy, but never too ashy or excessive, even when we use thinner cuts like hanger and skirt.

In fact, the method promises to reduce anxiety at our outdoor parties this summer by making the grilling speedier and more consistent, with far less sooty flare-up than when we raise our steaks a few inches onto a grate above the coals. (That air space between the meat and the heat provides oxygen for combustion.)

This is especially advantageous with fatty chops like pork and lamb, which turn out beautifully when you go commando and toss them directly onto the glowing coals.

Thank Tim Byres, an evangelist for live-fire cooking in his Smoke restaurants, who demonstrated the technique in May for a segment of our new TV show, “Southern Uncovered,” on Ovation.

The producers were secretly hoping for an Icarus moment, some kind of spectacular calamity on the restaurant’s 10-foot-long open fire pit, but the only pyrotechnics were in our brains; this simple act demolished everything we thought we knew about cooking proteins.

Even Mr. Byres’s richly marbled five-pound “Eisenhower steak” (a Brobdingnagian rib-eye with short rib attached, about two feet long), when cooked 10 minutes on each side, emerged with just a couple of silver dollars’ width of char.

The sugary, spicy dry rub he had patted into the beef before it hit the fire caramelized into a nice crust with that crave-worthy wisp of smoky bitterness that is the objective of outdoor cooking, and so welcome against the sweet richness of luscious protein and browned fat.

He credits President Dwight D. Eisenhower, a native of Denison, Tex., with turning him on to this technique.

“I heard a rumor of Ike grilling these really thick four-inch sirloins,” said Mr. Byres, who tracked down a 1953 article in The Miami Daily News that confirmed his hunch: Eisenhower, it said, “rubs the steak with oil and garlic and then, as the horrified guests look on, casually flings the steak into the midst of the red and glowing coals.”

It should be noted that only natural chunk charcoal (not briquettes) ignited in a chimney is recommended, so that wood is the only ingredient touching the meat.

Two chimneys lighted simultaneously are ideal, and will provide enough coals to cook several rounds of steaks, chops and foil-wrapped corn in succession. (One chimney full is sufficient for a couple of rounds, for a smaller group.)

In our tests, a dry rub (any rub, though Mr. Byres’s coffee-spiked version here is excellent) proved essential to protect the steak from the charcoal. We detected a thin coating of grit on bare steaks.

Before laying down the steak for the first time, give a good blow across the bed of coals to disperse any ash. Fastidiousness has no place around the live fire: A little wood ash is probably inevitable on your meat, but it will be invisible and will not interfere with the flavor.

For thinner three-quarter-inch steaks, cooking three to five minutes on each side produces the desired char and a rare interior; that translates to eight to ten minutes for the three- and four-inch steaks Mr. Byres prefers. For medium- to medium-rare, continue cooking another three minutes or so over indirect heat, up on the grate.

Alex check this link out:

It's a slightly more refined approach and is now the only way I grill steak.

Total eye opener - basically you cook the steak slow and low (crazy right??) in order to get the inside evenly cooked (no rare middle surrounded by well doneness) then you finish the outside at a high sear.