The English have just discovered Prince Harry's new girlfriend is half black...

Staff member
I was wondering when that would happen, and sure enough...

For a country as multiracial at the UK, you'd think that this sort of racist stuff would be over already. 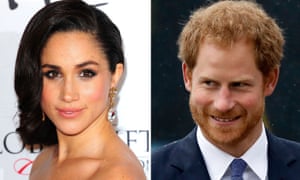 The prince said ‘a line has been crossed’ in reporting of his relationship with the 35-year-old American actor. Photograph: PA


Prince Harry has attacked the “racial undertones” of press coverage of his girlfriend Meghan Markle in an extraordinary statement in which he warns that he fears for her safety.

The prince said “a line has been crossed” in reporting of his relationship with the American actor, 35, who lives in Toronto.

“Some of this has been very public,” his spokesman said in a statement. “The smear on the front page of a national newspaper; the racial undertones of comment pieces; and the outright sexism and racism of social media trolls and web article comments.”

The statement confirms for the first time that the pair are in a relationship but launches a powerful and unprecedented attack at the media by the prince.

“Prince Harry is worried about Ms Markle’s safety and is deeply disappointed that he has not been able to protect her,” it said. “It is not right that a few months into a relationship with him that Ms Markle should be subjected to such a storm.

“He knows commentators will say this is ‘the price she has to pay’ and that ‘this is all part of the game’. He strongly disagrees. This is not a game – it is her life and his. He has asked for this statement to be issued in the hopes that those in the press who have been driving this story can pause and reflect before any further damage is done. He knows that it is unusual to issue a statement like this, but hopes that fair-minded people will understand why he has felt it necessary to speak publicly.”

The actor, whose father is white and mother is African American, has written about her heritage on her website, describing herself as biracial and “half black and half white”. Her father, Thomas Markle, is a lighting director who worked on the US TV show Married with Children, while her mother, Doria Ragland, is a social worker and yoga therapist. The couple reportedly divorced when she was six. 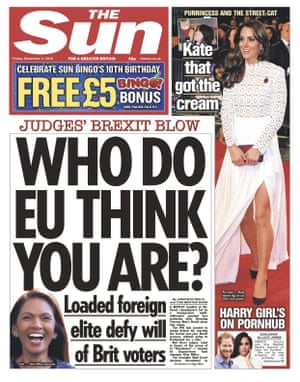 On Wednesday, the Sun ran a headline above an interview with Markle’s sister, saying: “Don’t fall for my little sis Harry, she’d be the next princess pushy”.

News UK, publisher of the Sun and Sun on Sunday, declined to comment. Senior staff indicated they were trawling through the domestic and international coverage to understand the detail of Prince Harry’s concerns over trolling and harassment of her family.

The prince’s statement also attacked what it called “substantial bribes offered by papers” to Markle’s former boyfriend. This is understood to refer to a large payment offered by one British paper.

Kensington Palace listed a string of complaints it had about the conduct of newspapers, citing:

A palace source said Markle had had people trying to get into her house in Toronto. In one incident, a photographer is said to have chased an assistant through her garage door and barged through behind her and the person had to be removed physically from her house and the police were called.

The statement said: “Since he was young, Prince Harry has been very aware of the warmth that has been extended to him by members of the public. He feels lucky to have so many people supporting him and knows what a fortunate and privileged life he leads. He is also aware that there is significant curiosity about his private life.

“He has never been comfortable with this, but he has tried to develop a thick skin about the level of media interest that comes with it. He has rarely taken formal action on the very regular publication of fictional stories that are written about him and he has worked hard to develop a professional relationship with the media, focused on his work and the issues he cares about.

“But the past week has seen a line crossed.”

The palace is concerned that some of the press coverage has given licence to social media users, on platforms such as Twitter and in newspaper website comment sections, to troll Markle, with racist slurs a particular worry. Royal officials have never before seen the coverage of a royal relationship balloon so fast in traditional and social media and Prince Harry felt he had to speak out, a source indicated.

A source at one tabloid newspaper said it had not been engaged in nightly battles with palace lawyers, as the prince’s statement suggests.

“Any journalist worth their salt will leave no stone unturned,” said Katie Nicholl, royal correspondent of the Mail on Sunday, in an interview on LBC radio. “If he really wants this to go away there is one or two things he could do. You give the press what they want. You make a statement, or you give an interview or you issue a picture. There has not been one picture of them together. Fleet Street will not rest until they have got their picture of them together and they have got some words either from Prince Harry or Meghan about the relationship.”

The source said the paper was taken aback by Harry’s statement and said his reference to legal battles, bribes or racial undertones was not a reference to the Rupert Murdoch-owned tabloid, but more likely to do with paparazzi in the US.

On Saturday, the Sun told readers Markle’s background had more in common with the modern British family than those in the “fusty royal corridors” and was more relevant to the modern woman than the Duchess of Cambridge.

“Meghan, with her divorce, her ethnic background and fake-it-til-you-make-it work ethic is much more the 21st-century woman”, something “the future of the royal family may depend on”.

The source said Prince Harry’s communications team failed to offer any guidance when reports emerged of their relationship in the Sunday Express last month.

“They had three days to stop this story,” the source said. “Any decent press office would have put out a statement saying they are in a relationship, saying they have a right to privacy etc and that would have been that. But they didn’t.”

A source at the Daily Mail said they were bewildered by Harry’s reference to harassment, bribes and crossing a line. They said they did not know what his communications staff were referring to.

Something else bullshit for Nigel Farrage to champion.

something something and the half blood prince?