The Detroit Party Marching Band is a guerrilla-style marching band comprised of 30 members from the Detroit-area playing every instrument you can recall from high school band. For the very first time, the band brought their eclectic, unstoppable music to Toronto. In support of the Lemon Bucket Orchestra’s Folk the Winter event, the Detroit Party Marching Band arrived in Toronto with seconds to spare.

If you’re unfamiliar with the band, they’ve received moderate fame outside of Detroit through a fall tour in support of fellow Detroit native My Brightest Diamond. They also played St. Jerome’s Laneway Music Festival in Detroit, popping up in many unsuspecting corners of the outdoor venue. I was lucky enough to have seen the band play at Laneway in Detroit.

Seventeen of the band’s thirty member roster made it out to Toronto last night and from the band’s presence and sound, you’d never know they were only at half attendance. Despite lugging around instruments of all sizes, the band’s dazzling presence was surprisingly physical and full of energy. Their set was filled with kicks, high fives, hugs, and cheering – something that can’t be mustered up by just one person. The band’s expressions of joy were sincere and wholehearted, which can only be a sign of the band reinventing themselves with each show. I can’t possibly gush harder about the wonderful vitality and warmth that the Detroit Party Marching Band exude.

Get to know the Detroit Party Marching Band here

I’m new to the Lemon Bucket Orchestra, a Toronto-based “Balkan-Klezmer-Gypsy-Party-Punk-Super Band formed in 2010. Famed for random and unexpected performances, the Lemon Bucket Orchestra started the gig in the conventional venue of the parking lot of a big box grocery store behind the Gladstone Hotel. They continued to march the bustling crowd comprised of families, twentysomethings, and passersby to the small, mostly cement nook just past Dufferin, which I newly learned is called the Parkdale Amphitheater. Both the Detroit Party Marching Band and a Toronto-based samba ensemble called Samba Elegua. In addition to the mess of musicians were folks from flame throwers New Model Circus, theatre works by Kosa Kolektiv, and stilt walkers Maracatall. It was truly a nutty evening.

This video is worth a peak to get familiar with the Lemon Bucket Orchestra.

The Detroit Party Marching Band took their antics to a nearby pub called Salvador Darling and played a mini-set in a very tiny space. I nearly got my eyes taken out by two trombone players and my friend was nearly sacked by a bass drum player. Near injuries aside, I have never been so close to live music – a real unexpected treat. 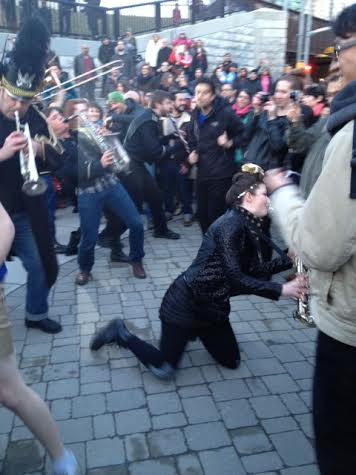 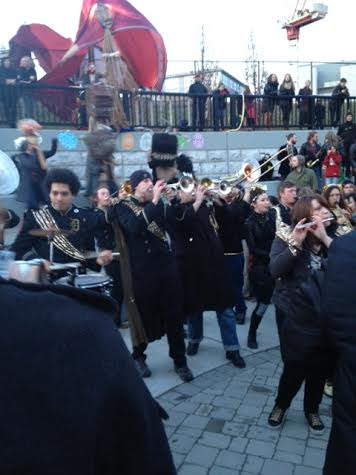 Hella fun. Have heard about LBO for ages but my 1st time going on one of their marches. I didn't dress warm enough so left ~9. Shame I didn't know about the pub plans after.

Thanks for the thorough review forthetrees!

There's a video expose of them online from the American Hipsters.
[YOUTUBE]l3rYmw1iz6E[/YOUTUBE]
F