The COPS are too much thread

if it bleeds, it leads...this should help Alexd's online attendance.
LiveLeak.com - Miami Beach Fatal Shooting - Alternate Angles
suspect in a bank robbery makes zero moves towards poh poh, gets gunned down. pow pow.
Imma gonna guess those cops were afraid for their lives.
here's another view where cops were clearly in fear for their lives...
http://www.liveleak.com/view?i=a84_1449340234

There's a bit of unearned machismo showing its face here and its a dichotomy that shouldn't be strange to us in the west, steeped in narratives about how brave and courageous we are to self sacrifice ourselves for other people around the world - meanwhile when we engage we do it from 40 000 feet and with the least footprint possible and with an aversion to casualties that borders on the irrational.

The police I feel benefit from the same dichotomy the military does - here the cops are shooting suspects when its clear many other options could have been pursued and its partly because they have this crazy aversion to risk to themselves which makes it ok to use force in that way - but if thats true, then they shouldn't be able to call themselves brave and tell us all stories about the nobility of the Cop Mission.

If you're brave it means you put more risk on the table - risk to yourself - and that risk is put there in the service of other people you are helping.

You can be a useful coward.

If you don't put much risk up on the table then you're not really "brave" - even if the stated goal of your efforts is admirable.
Last edited: Dec 6, 2015

Chicago is a shit show

But so is this place:

Police in Kern County, California, Kill Residents at the Highest Rate in the U.S. - The Atlantic

Disturbing new twist in Chicago
fucking insane.
this woman needs to be brought up on serious Federal charges.

Horrifying Video Shows Cops Sic K-9 on Infant Daughter of a Man they Mistook for a Suspect | The Free Thought Project
warning...although not much is shown in the video except for the release of the dog, the story, and sounds of the little girl are...horrifying.
viewer discretion is advised.

what sickens me, is that they covered up the faces of the cops. They're the only ones who did everything wrong, and they're all still employed.
nevermind the City only paid the family 13 grand.

ndrwrld said:
Horrifying Video Shows Cops Sic K-9 on Infant Daughter of a Man they Mistook for a Suspect | The Free Thought Project
warning...although not much is shown in the video except for the release of the dog, the story, and sounds of the little girl are...horrifying.
viewer discretion is advised.

what sickens me, is that they covered up the faces of the cops. They're the only ones who did everything wrong, and they're all still employed.
nevermind the City only paid the family 13 grand.

given it's a minor she will have the ability to sue as the limitation period will be extended until she is 18.

Regardless this is what happens when anyone can become an officer, incompetent people....

Lawyers Say Chicago Cops Threatened Witnesses and Forced Them to Lie About the Laquan McDonald Shooting
the fact the current Mayor of Chicago still has his job is frightening.

Once upon a time, I was neatly in bed in my own house.

I heard a wrapping upon my door.. At first I ignored it.
But it continued... So I got up, went downstairs to my door, and saw that it was a cop.

The cop asked me if so-and-so was present, I said no. He wasn't present. This didn't seem to satisfy the cop, and he asked to come in. I said no again. He then told me I could be charged with obstruction of justice. I repeated the true claim that no one else was in my house and that I was cordially enjoying sleep before he wrapped on my door.

He said he would have to write me up a notice for this obstruction, and he returned to his cruiser which was parked just in front of my house.

So I followed him to the cruiser to ask about this writ I was getting, and as soon as I stepped on the sidewalk I was arrested for public intoxication.

The $70 fine is not so bad, but being hauled away from your own bed because some cop has some idea is not pleasant, especially since the next 6 to 12 hours are spent in the drunk tank, where there are no clocks and no bedsheets.

That was the most unreasonable time I was put in the drunk tank. The other three were more or less justifiable though unnecessary. Not sure that it's any improvement, but now they put me in the hospital, often on a form 1. Difficult to explain these to HR....

Yes, there are bad cops. And bad lawyers and bad politicians and bad people in general.

But for all of you who are so quick to criticize the police, I'd be willing to bet that you wouldn't want to step into their shoes when they are out on patrol in the middle of the night.
J

kennyboy said:
But for all of you who are so quick to criticize the police, I'd be willing to bet that you wouldn't want to step into their shoes when they are out on patrol in the middle of the night.
Click to expand...

In the middle of the night is when the cops get me the most. I am not afraid to be out, and I don't pack heat. But in this country, the cops will aim for the lowest fruit, which is usually me taking a leak behind some corner.

When I've lived in far more dangerous countries than Canada, where there are no cops, I've felt completely safe. In those situations you can rely on your abilities as a human to not get into trouble.

Everywhere downtown Kitchener for example is safe. Even the "sketchy" areas. It's more dangerous to be a construction worker in KW than to be a cop. And one is rewarded very handsomely while the other is not.

this guy was having a schizophrenic episode.
he walked up to a neighbors house with a garden hose nozzle. 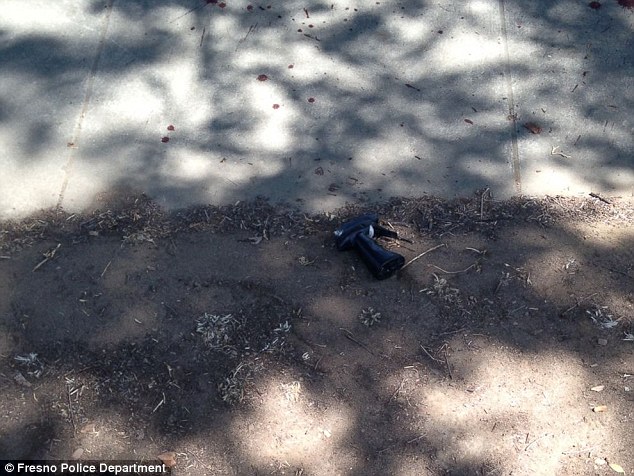 then, this happened.
NSFW.
https://vid.me/TwXM
Fresno police Chief Jerry Dyer justified actions of his henchmen by stating he reviewed the video and it showed the officers giving Centeno multiple commands. The officers, he said, then used lethal force because Centeno was reaching for his waistband. What an absolute crock of shite.

In a follow up statement to the media, Chief Dyer blamed Centeno’s death on the fabricated “war on cops“:

Certainly police officers are being very vigilant, but at the same time, I know that there’s a high level of scrutiny and criticism on the actions of officers. What we have seen this week is an increased level of aggressiveness toward officers, and when officers fear for their life, or for the life of someone else, they use deadly force, and unfortunately we’ve had three of those incidences occur in the last week. This is our sixth officer-involved shooting in the last year.
:O

LiveLeak.com - Police Sued For Illegal Cavity Search (Full, Unedited)
this cops likes sticking his fingers up men's bums. he's also going to keep his job, and cost the taxpayers of this city hundreds of thousands of dollars.

A week ago, this is the same guy who said he's never witnessed any police wrongdoing in his 27 years on the job.
New Top Cop's Fiancee Under Investigation For Alleged Police Exam Cheating
what an absolute shitshow Chicago is.
J

^^
Yup,
Toronto is not far behind and it starts with Mike Mcormach, the most corrupt fukin cop, and union prez. what a joke!
J

911 caller could face charges after man with BB gun shot dead by police - National | Globalnews.ca
so...charge the person ( who isn't a gun expert ) who called 911 saying they thought someone was pointing a gun... but don't charge the cops for shooting and killing the man ( and an innocent bystander ) pointing what turned out to not be a gun.
wow.

Pretty damning and thorough article, describing all the issues plaguing the TPS...and this could probably be applied to many police forces/services across the country.

The Toronto Police Service versus everybody else | Toronto Life

Bitter-Sweet Victory: Charges Dropped for Brothers Who Fought Back Against Detroit Cops AnonHQ
They really do need to start taking these settlements out of their yearly budget.
Oh wait..better yet, fire the 2 cops.

Officer Murphy has seen 19 complaints against her in the past, and Officer Lopez has received 21.
Still on the job.