Did I hear correctly that China exempted imports of crucial materials for the remainder of the year?

More than 400 pages of internal Chinese government documents obtained by The New York Times show new details on the origins and execution of China’s mass detention of as many as 1 million Uighurs, Kazakhs and other predominately Muslim minorities in the Xinjiang region, per The Times.

"The 403 pages reveal how the demands of top officials, including President Xi Jinping, led to the creation of the indoctrination camps, which have long been shrouded in secrecy," The Times reports.

The authors are Austin Ramzy, a Hong Kong correspondent, and Chris Buckley a correspondent covering China, where he has lived for more than 20 years.

Secret documents reveal how China’s mass detention camps work, including a series of surveillance measures to “prevent escapes” by Uyghurs and other minorities, most of whom are Muslim. The directives also outlined a strategy to rewire the thoughts of detainees and the language they speak. Experts say the new leaks “confirm that this is a form of cultural genocide.”

Classified directives, leaked via a chain of exiled Uighurs, lay out the Chinese government's strategy for locking up more than 1 million ethnic minorities even before they commit a crime, to rewire their thoughts and language, AP reports.

The six directives, published by news organizations around the world in conjunction with the International Consortium of Investigative Journalists, follows a different cache that was revealed by the N.Y. Times 10 days ago.

On Tuesday, China’s foreign ministry spokeswoman Hua Chunying told reporters that the cases of Kovrig and Spavor have been transferred to prosecutors for “review and prosecution in accordance with the law.” Such trials are usually carried out behind closed doors and convictions are virtually assured.


A year ago, after Canada’s arrest of Huawei executive Meng Wanzhou, China arrested the two Canadians and accused them of violating state secrets laws. Authorities have yet to make public any evidence against either man as Meng lives in her Vancouver mansion.

To get a sense of the pair’s living conditions, Globe correspondent Nathan VanderKlippe visited the facilities where they’re being detained.


Spavor, a businessman who brought tourists, artists and athletes to North Korea, has been inside Dandong Detention Centre since May 6. He’s being held in Cell 315 with some 20 others. Kovrig, a former Canadian diplomat, is being detained 670 kilometres away in a cell with one other inmate.

The Dandong facility is also where Canadian Kevin Garratt was held for 19 months before his release in 2016. Detainees there must pass through a tunnel and seven locked doors before reaching an area situated inside an imposing inner wall ringed with guard towers and razor wire. Garratt said the beds were wooden boards on steel frames covered by thin cotton pads.

It’s a case that upended Canada’s relations with China and led to what critics called hostage diplomacy through the jailing of two Canadians. A little more than a year after her arrest at Vancouver’s airport, Huawei’s chief financial officer will head to B.C. Supreme Court today for the start of extradition proceedings.
China’s foreign ministry on Monday called on Canadian authorities to immediately set free Ms. Meng. The case could take years to play out, and the stakes are high – both for Meng and for the Trudeau government. Here’s a look at what to expect:


First steps: Meng’s lawyers will argue this week that the fraud charges she faces in the United States would not be a crime here because the case is linked to alleged violations of U.S. sanctions against Iran – the type of sanctions Canada dropped in 2016. If the Attorney-General’s department successfully defends against this, the next hearings will be in June.
Meng’s legal team: Despite Huawei’s position as the second-largest smartphone maker in the world, lead lawyer Richard Peck doesn’t use a cellphone. The 71-year-old is widely seen as the dean of British Columbia’s criminal-defence bar, Sean Fine writes. Expect a “low-key but very effective” style rooted in facts and reason, one lawyer said.
The stakes: The case is “definitely a defining moment in the bilateral relationship” with China, says Lynette Ong, a professor at the University of Toronto. Attorney-General David Lametti could opt to intervene to release Meng, but critics say that would send a message that the rule of law in Canada is no different from China’s.
Our editorial board’s view: “Washington had every reason to expect that Canada would honour an extradition request. But Ottawa had every reason to expect the U.S. to stand up against an attack on an ally, and on the American-led international order. Washington’s abdication has left Canada high and dry.”

Prosecutors defended a U.S. extradition request for Huawei chief financial officer Meng Wanzhou on Wednesday, and argued Meng’s alleged bank fraud is at the heart of the case – a pointed counter to her defence team’s argument that “double criminality” is the heart of the extradition case. Prosecutor Robert Frater said Meng was arrested on charges of bank fraud, which is a crime in both countries, and not because of U.S. allegations she violated U.S. sanctions against Iran. On Monday and Tuesday, Meng’s legal team argued the case is really about a violation of U.S. sanctions against Iran, which they argue can not be prosecuted in Canada because Canada has no economic sanctions against Iran.

British Prime Minister Boris Johnson is inching toward a decision that could profoundly harm the "special relationship" between Britain and the United States under President Trump.

Driving the news: Johnson is expected to decide, as soon as this week, whether to defy Trump's request that he ban Chinese technology giant Huawei from the U.K.'s 5G wireless network.

Behind the scenes: "This is a highly consequential decision that the British prime minister's going to be making," a senior Trump administration official told me in a phone interview on Saturday.

Why it matters: The Huawei debate — which may seem abstract to many Americans — has become one of the most urgent foreign policy priorities of the Trump administration and one of the more serious tests of the U.S.-U.K. relationship in recent times.

Former Australian Prime Minister Malcolm Turnbull has been a leading voice, globally, in warning about the risks of allowing the Chinese company to embed itself in Western mobile networks.

The big picture: The battle over Huawei is what a "tech Cold War" begins to look like.

Between the lines: 5G mobile networks will allow humans and machines to communicate at unfathomable speeds. When people talk about the Internet of Things, they are referring to a world in which everything from driverless cars to home appliances to hospital equipment will be connected and constantly exchanging data. 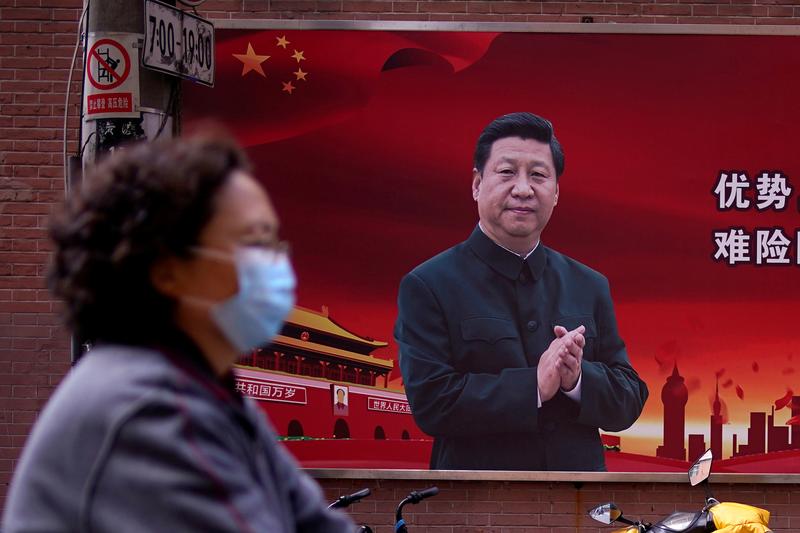 An internal Chinese report warns that Beijing faces a rising wave of hostility in the wake of the coronavirus outbreak that could tip relations with the United States into confrontation, people familiar with the paper told Reuters.

The family of Michael Kovrig has spoken out, pleading with the Canadian government to rethink its strategy to ensure the release of Kovrig and Michael Spavor, who have been imprisoned by the Chinese government for 560 days.


Kovrig’s wife, Vina Nadjibulla, has shared letters from her husband with The Globe and Mail that detail his life in a three-by-three-metre cell.


China has continued to deny any connection between the imprisonment of the Canadians, and the arrest of Huawei executive Meng Wanzhou.


In an interview Monday, Bennett Kovrig, the father of Michael Kovrig and a professor emeritus of political science at the University of Toronto, argued that Justice Minister David Lametti has the power to end extradition proceedings against Meng Wanzhou. This argument has the backing of former Liberal justice minister Allan Rock and former Supreme Court judge Louise Arbour.


By doing so, Mr. Kovrig believes China will release the two imprisoned Canadians.

Accusations of genocide in Xinjiang

The Chinese government has been accused of "demographic genocide" by forcing birth control and sterilizations on minority populations, especially the Uighur Muslims in Xinjiang region.

Why it matters: A policy of forced sterilization and abortion imposed on minority populations would bring China's policies closer to the textbook definition of genocide, notes Axios' Bethany Allen-Ebrahimian, who has reported extensively on China's abuses in Xinjiang.

The bottom line: China denies the AP report as "fake news," but read the numbers yourself:

The Chinese government has been accused of "demographic genocide" by forcing birth control and sterilizations on minority populations, especially the Uighur Muslims in Xinjiang region.

Why it matters: A policy of forced sterilization and abortion imposed on minority populations would bring China's policies closer to the textbook definition of genocide, notes Axios' Bethany Allen-Ebrahimian, who has reported extensively on China's abuses in Xinjiang.

The bottom line: China denies the AP report as "fake news," but read the numbers yourself: