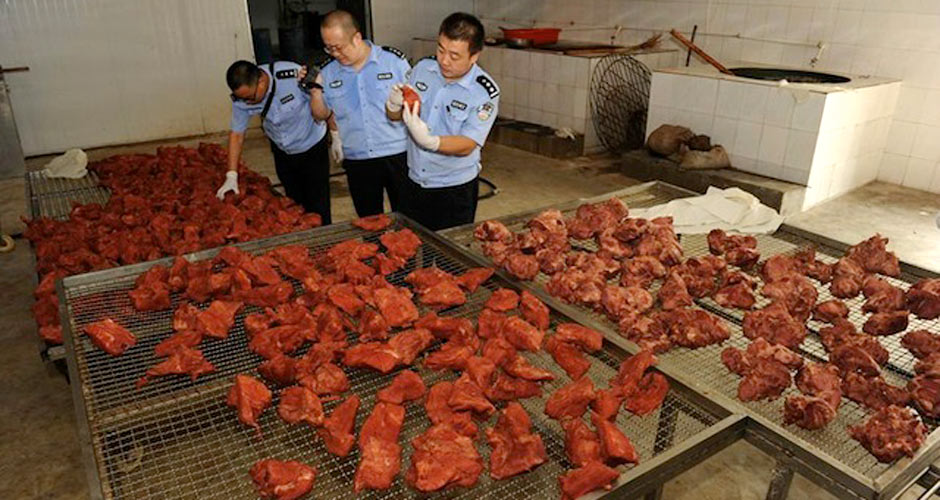 This week, police in Xi’an province reported that they had found and seized more than 22 tons of fake beef at a local factory. Get this: the “beef” was actually made from pork (which is considerably cheaper than beef) that had been treated with chemicals including paraffin wax and industrial salts to make it look like it came from a cow. Shanghiist reports that the factory sold more than 1,500 kilos (3,000 pounds) of the fake beef to local markets at around 25 to 33 yuan ($4 or $5) per kilo. Six workshops that were producing the fake beef have been discovered and shut down.

This isn’t the first instance of fake meat being sold in China. In May of this year, Medical Daily reported that 904 people were arrested in China for “meat-related offenses” over three months at the beginning of 2013. Included in these arrests was one gang of meat crooks who made over 10 million yuan ($1.6 million) by selling rat, fox, and mink meat at markets. This makes us wonder what impostor foods we might be eating, which in turn makes us very, very uncomfortable.

AGAIN, what is the pre-occupation with FAKE EVERYTHING in Asia?

the Chinese are masters (monsters?) at economizing.
S

but not so much at innovating?

Death sentence for killing a toddler in a dispute over a parking space
Beijing Court Sentences Man to Death for Killing Toddler Over Parking Space | TIME.com

Sal De Ban said:
AGAIN, what is the pre-occupation with FAKE EVERYTHING in Asia?
Click to expand...

South Korea has to be the fakest place ever.

And it's largely celebrated as the culture to aspire toward in Asia.

The majority of this waste comes from one source: official banquets paid for with public funds.

That may explain why the central government is hell-bent on slashing the number of local government liaison offices in Beijing.
Click to expand...

what are they doing, swimming in piles of quinoa?

Mother Bear Kills Cub & Self To Escape Life Of Torture |

fucking humans, so disgusting what we are capable of.

did some reading on the gall market...ugh.

That's fucking disgusting. I sometimes shake my head and wonder why we continue doing business/trade with a country like that.

Drivers in China intentionally kill the pedestrians they hit