Any asian tourists would do that, really. Except Koreans would make a peace sign with their fingers.
M

Well, there's a few things going on. Who knows if they knew that dolphin was injured. Even in the photos, it looks fine. And who knows if the cause of death is from lifting it. I mean, hello, the thing beached and got run over or something. And again, those guys are hot.

Any American tourists would've seen the thing and snapped photos too.

Having said that, there's definitely a lack of respect for animal welfare in some Chinese cultures.
S

An animal described as an African lion at a Chinese zoo was exposed as a fraud - when the creature started barking in front of visitors.

Chinese media reports said the zoo had replaced its genuine lion with a Tibetan mastiff dog.

A zoo official in Henan province said the dog - owned by one of the workers - was put in the cage when the real lion was sent away to a breeding centre.

Outraged visitors to the zoo in Louhe city said they had been cheated.

According to a report in the Beijing Youth Daily, the fraud came to light when a mother visited the zoo, in a park in the city of Louhe, to show her son the sounds different animals made.

But when they got to the cage marked "African lion" - which had a sign describing the range and characteristics of the animal - they were shocked to hear the creature bark.

It was then that zoo keepers revealed the so-called lion was actually a Tibetan mastiff, an animal that can have a furry brown coat, making it look a little like a lion.

The woman visitor, surnamed Liu, was quoted as saying: "The zoo is absolutely trying to cheat us. They are trying to disguise dogs as lions."

The chief of the park's animal department, Liu Suya, was quoted by the Beijing Youth Daily as saying the lion had been taken to a breeding facility and the Tibetan mastiff temporarily placed in its cage because of safety concerns.

Other species were also apparently mislabelled; there was a white fox in a leopard's den and another dog being passed off as a wolf.
Click to expand...

How can they have any dogs to put in cages when they're eating all of them?
H

Tibetan mastiffs are crazy expensive in china. I'm more curious how a zoo employee could afford one.
M

When in China, I noticed the big thing seems to be owning a dog now. Everyone seems to have a beautiful healthy looking gorgeous dog. The most beautiful dogs I've ever seen. Poor people to wealthy people all seem to have a dog. Even my relatives got their own stray dog. It seems people give them away when their dogs have babies. I wanted to steal so many dogs I've seen. You don't see such beautiful dogs here. They all could've been show dogs.
K

I read your post 10x I love how often you wrote DOGS.

Wow. That guys must be a lot to handle.
M

kuba said:
I read your post 10x I love how often you wrote DOGS.
Click to expand...

I've been working for 27 days straight so...

I love long haired Chinese Pekingese dogs, they're so cute.

MoFo said:
Wow. That guys must be a lot to handle.
Click to expand...

And on top of that, two ugly dogs.

What, really? Those dogs are amazing!
M

MoFo said:
What, really? Those dogs are amazing!
Click to expand...

Yeah, not my personal preference but those dogs look well kept and have beautiful fur. Can't say the same for Sigfried & Choy up there.
D

And moreover, their owner looks like My Worst Gay Nightmare.

I've been told, about 10 years ago when the sale of dogs was unregulated, scammers would paint black dots on a white puppy mutt and sell it off as a Dalmatian, LOL
M

I noticed poles in China painted with "Dogs for sale" ads. Red background and black text looking to sell puppies. Or stray dogs that they've found and trained to be given away. It was neat. Almost every place had a dog outside or at the door.
M

I'm not sure what's more disturbing.

That those guy's are wearing speedo's.
That they are taking pics with a dying dolphin.
That the one guy is taking a selfie on top of being photographed already.
That I just used the word selfie.

That last one I blame on the Chinese monster powers.
T 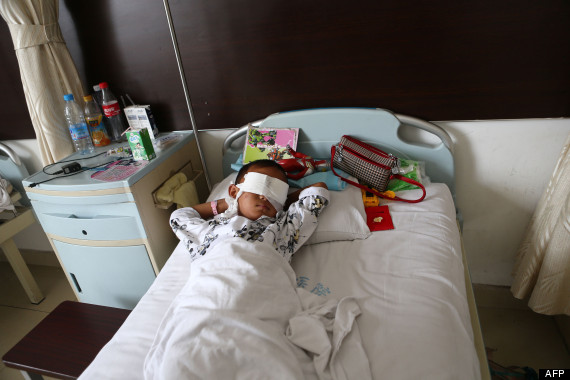 A six-year-old has been left blinded after his eyes were removed in what is suspected to have been an attack by an organ trafficker.

The boy went missing as he played outside his home in Shanxi province, in China, AFP reported.

His panicked family eventually found him in a nearby field, covered in blood, with his eyes found nearby.

The corneas of the eyes were missing, according to Chinese television reports, leading to suspicions the attack had been carried out by a professional organ trafficker.

“He had blood all over his face. His eyelids were turned inside out. And inside, his eyeballs were not there,” his stricken father told Shanxi Television.

The boy is said to have been drugged during his ordeal, China Central Television said on its Sina Weibo account.

Police have offered a 100,000 yuan (£10,000) reward for information leading to the arrest of a female suspect, News.Xin.msn states.

In 2012 police in China arrested 137 people, including 18 doctors, for allegedly trafficking human organs in a nationwide crime ring, IBTimes revealed.

The size of the global organ trafficking industry, which primarily engages in kidney transplants, remains unknown due to its blackmarket nature. However, anecdotal evidence shows that it is clearly a multi-million dollar industry.

Chinese Boy, 6, Has Eyes Gouged Out In Suspected Organ Trafficking Attack (PICTURES)
B

Here's what third-century China thought about the Roman Empire