Now I am from T.O., and I love the Raps and I want to see them do well, but consider this. Those of us who didn't just jump on the bandwagon of basketball loving when Toronto got a team had to have favourites before the genesis of the Raptors.

Mine are none other than the Detroit Pistons. I loved them ever since I went to see them play in the second round playoffs in 1989....just before the won the first of two NBA Championships.....

Dennis 'The Worm' Rodman & John 'Spider' Salley......oh, what days they were!
Now, alot of people love to hate the 'Bad Boys' as the Pistons were known back then, but I was a fan through and through. I mean, dirty or not, they depended less on star power and more on hard, blue-collared work....that is why Detroit loves them so much.....

The venerable Joe Dumars.
All those years of teal uniforms were crap! The Bad Boy Colours are back, the style and work ethic is back, Joe Dumars is in control, Isiah's jersey is in the rafters, fans are remembering the great deeds of Laimbeer, John 'Spider' Salley, Mark Aguire, and Dennis Rodman.......and 'The Final Countdown' is ringing through Auburn Hills once again!!!!

The only man who could ever control Dennis Rodman, Chuck Daly 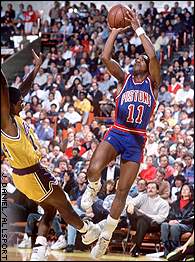 Kid Courageous, Isiah Thomas.
I really want to see the Raps pull this one out, but I was a Pistons fan for about 8 or 9 years before we even had a team, and I think if you admit it, some of you would like to see them do well too! After all, they did us all a favour in 1989 by knocking off the damn Lakers!!! We didn't have to see 'Showtime' raise the trophy for another 12 years or so!!! =)

you forgot The Microwave...
T

you probably don't remember this but when Isiah inbounded that pass to Larry Bird with a few seconds left in game five of the Eastern Finals in 1987, which was possibly the worst play in the history of sports (Bill Buckner exlcuded), I threw up...just thought I'd share.
X

Originally posted by ~soulheaven~
Dennis 'The Worm' Rodman & John 'Spider' Salley......oh, what days they were!
Click to expand...

those were the days weren't they
T

Alvin "I can't shoot worth shit" Williams. Two missed freethrows and an open 3 pointer.. arrrgg.. the pain and agony..

where was the timeout on the last possession?!?!?!

Originally posted by thehedonist
Alvin "I can't shoot worth shit" Williams. Two missed freethrows and an open 3 pointer.. arrrgg.. the pain and agony..

the bloke is only human...every player misses a shot...no need to get all angry on him...word!
T

Re: Re: The Bad Boy Pistons & The Final Countdown

those were the days weren't they
Click to expand...