For a B.A. in Bacon, They All Chewed the Fat
By LINDA LEE


ROM the worried expressions as my guests stared at the oven door — one of them asked, "Are you sure it's all right in there?" — you would have thought there was a cat having kittens in my oven rather than strips of bacon cooking in a pan. They need not have worried.

Tossing a couple pounds of bacon into the oven turns out to be a fine way to cook it, especially when you are handling quantity and a party is going on. My guests were trying 11 kinds of bacon that night, an unexplored area of connoisseurship for them, and for me.


Forget standing in a supermarket and peeling back the little windows on the bacon package. (And what are people looking for anyway, other than the least fat, which is the whole point of bacon?)

The adventure in saturated fats I was offering my guests meant tracking down hand-rubbed sides of bacon that have been smoked by specialists like Jamie Nicoll in Culpepper, Va., who uses words like "luster" to describe bacon fat and "sexiness" to describe a particularly attractive rasher.

What is the best bacon out there? That's not the right question, since one woman's slice of Danish slab bacon — "delicious, unsalty, yummy, go Danes, wuff wuff!" she wrote in her tasting notes — was another man's "dismal industrial flavor that conjured up memories of tinned meat."

In fact, it was rare to find consensus among my 15 bacon-scarfing guests, even on Rain's 2B sugar-cured bacon, a superwide shoulder bacon from Missouri, which tasted, they said, like pastrami, corned beef or "an overcooked Easter ham at a family gathering in Nebraska."

Which is not to say that my guests failed to finish any of the bacon, snipped into bite-size pieces with shears. Overdone, underdone, hammy, cured, uncured, with and without nitrates, pastramilike — bacon, it turns out, is still bacon.

The real question should be, Is there such a thing as bad bacon?

Over a two-month period, inspired by a bacon-and-wine tasting organized by the restaurateur Danny Meyer (who runs Union Square Cafe and that palace of barbecued pork, Blue Smoke), I sampled more than 20 bacons to prepare for my own tasting. I was not alone in my gluttony. The National Pork Board reports that bacon sales increased 45 percent from 1999 to 2000, the latest figures available.

There were significant differences between the meats. Bacon makers guard their secret recipes as jealously as Aunt Margaret guards the fact that she pours Courvoisier into her candied sweet potatoes. But some will talk about their pork bellies.

Bill Niman's nitrate- and nitrite- free line of bacon from Niman Ranch in California is sold at many Whole Foods stores and is considered almost organic. "Our hogs are antibiotic-free, with a vegetarian diet," he said. "Our pigs are all raised outdoors and never tethered."

That is the secret to good, fatty bacon, he said: cold Midwestern winters. "To regulate body temperature, hogs grow back fat," he said. His company sells that fatback as its intoxicating lardo.

The experts agree that while it is, of course, a personal preference, the less bacon is cooked, the better the taste. Mr. Nicoll, who owns Summerfield Farms in Virginia, says he eats his bacon "as underdone as you can stand it — I try to keep as much fat in there as you can stand."

I kept that principle in mind while testing the 11 bacons that made it to my final round. In it, I served my guests the meat along with wine, beer and paper ballots. They were asked to use any terms other than salty or smoky, and they came through with flying colors.

At the top of the heap was the Summerfield Farms slab bacon, described as "earthy, fatty, brisketlike," and "like tiny loins or chops of real pig." A fellow from Wall Street said: "Tastes like popcorn. An honest bacon, sticky and meaty. A bacon eater's bacon. Macho."

A close second was Nueske's from Wisconsin, tasted in plain and peppered form. The regular Nueske's, which may be familiar from Balthazar, Pastis, Le Bernardin, the Harvard Club and Cafe Centro, was described as a classic, "a bacony bacon."

Nodine's apple-smoked bacon from Connecticut was praised as "tangy ham that engages both the front and the middle of the tongue," with "a light, smoke flavor" and a "delicious aftertaste and good fat content."


More heavily smoked and salted bacons did that job. Carleton Farms bacon from Oregon was praised by one guest as "an almost earthy flavor, perfectly chewy and yummy."

Another complimented it as "complex, gentle and pleasant, after an unsettling initial maple kick." Another said, "This is a pleasant little intoxicant."

Father's hickory-smoked bacon from Kentucky did not do so well, prompting one guest to write: "New Salty Chews!" Another guest said: "This would turn steel to rust overnight" but also said it was "highly addictive."

Among pepper bacons, both the Nueske's and the New Braunfels Smokehouse Pepper Bacon from Texas got good marks. Nueske's was called "saucy and aggressive." The New Braunfels had, one man said, "a seductive pepper finish, a hint of game." But another, jaded taster said he thought the New Braunfels bacon was "too conceptual."

The biggest surprise for many was Kunzler reduced-fat peppered bacon from Pennsylvania. A bacon that achieves its lower-fat status from careful trimming and a center cut, the Kunzler got comments like "my favorite so far — with just the right touch of fat." Another said: "Low fat? Wow, a rich flavor. Can't tell the difference. Very good."

At this point, my guests paused to rehydrate. The salt-per-serving numbers ranged widely, from 70 milligrams for the Kunzler to 300 milligrams for a comparable amount of the Fathers Hickory Smoked. But if you are reading nutritional labels, perhaps bacon is not right for you. Bacon belongs to the hedonist, the throw-caution-to-the-winds sort who would eat a bacon sandwich with a side of bacon.

When people arrived for my party, they said, "I could smell the bacon all the way down to the front door." And they meant it in a good way.

Rob Hurlbut, the president of Niman Ranch, said it best: "Bacon should be listed as an aphrodisiac." 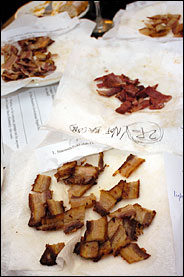 It's a level of savouringI hadn't considered !

tears in my eyes wide shut I guess.
H

I fried my perogies last night in bacon and it's grease. soo yummy.
A

"Bacon should be listed as an aphrodisiac."
Click to expand...

Sure, but how does it compare to pastrami?
S

Re: Re: The Bacon Summit

Originally posted by AdRiaN
Sure, but how does it compare to pastrami?
Click to expand...

I find the pastrami to be the most sensual of all the salted cured meats.

Jesus, just the thought of all that bacon makes me wonder why I should care!

Re: Re: Re: The Bacon Summit

Originally posted by Soundstream
I find the pastrami to be the most sensual of all the salted cured meats.

No way. Prociutto is wayyy more romantic. It hangs by a window by the sea for 2 years prior to consumption, gazing wistfully for when true love will come to port..

Originally posted by Littlest Hobo
No way. Prociutto is wayyy more romantic. It hangs by a window by the sea for 2 years prior to consumption, gazing wistfully for when true love will come to port..
Click to expand...

sweetie you missed the joke.
('tis from seinfeld)
S

Originally posted by Littlest Hobo
No way. Prociutto is wayyy more romantic. It hangs by a window by the sea for 2 years prior to consumption, gazing wistfully for when true love will come to port..
Click to expand...

Not a Seinfeld fan, eh?

I know nothing of this Seinfeld joke. I stand by my original statement.
M

Ah nuts. I thought it was going to pictures of bacon slathered on Dr Funk MD's body.