A teacher jailed for having sex with a 13-year-old has been arrested again.

Pamela Rogers, 28, of Tennessee, is accused of violating her probation conditions by sending photos and videos of herself naked by mobile phone to the boy.

The former physical education teacher was sent to jail for nine months in a plea deal last August for the three-month affair with the boy.

She was released in February for good behaviour.

But the Tennessean reports that authorites claim that after her release she created a MySpace.com web site and blog.

She denies posting messages to the boy on her site.

Her arrest this week follows allegations that she has breached probation by contacting the boy by phone, e-mails and text messages along with the nude photos and sex videos, according to court documents.

"Some of the naked photos and videos she sent after her most recent court appearance on April 12, a warrant says", reports the Tenneassean.

Her jail term was part of an eight-year sentence for the attractive former homecoming queen, who was directed to surrender her teaching certificate, and barred from granting interviews or profiting from her story.
Click to expand...

Anyhoo, she looks kinda rough in her mug shot:

But from her court appearances: 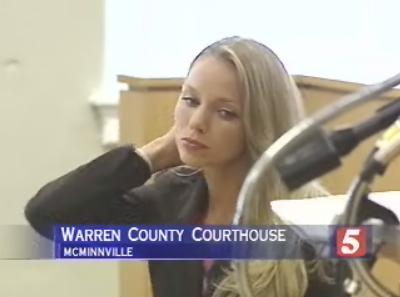 I expect pics and videos in this thread.
M

I'd let her teach me anyday
G

I love the pouty "I didn't do it" look in this picture.
H

i bet she fucked her lawyer...with a starp on

once you go thirteen you never go back?

wait no
that didn't work
G

Hamza said:
with a starp on
Click to expand...

ah yes.. nothing beats a good starp on.

Dr Funk MD said:
I love the pouty "I didn't do it" look in this picture.
Click to expand...

we had a hottie like that.
miss Favero.
no one did her though.
stupid guelph.
D

she's got a killer body in a few of those pics.
ouch.

Holy fuck where were teachers like that when I was in school??? Definitely hit that now and back then.

lol @ me living in this state
D

samjane said:
lol @ me living in this state
Click to expand...

I'd make fun of Tennessee but I'm in Nebraska so its really a pot kettle black thing now isn't it.
W

as hot as she is, she's obviously got some major problems, and i still find this as creepy as if it were a hot guy teacher and a 15 year old girl.

i feel sorry for the kid - this kind of thing has to fuck you up.

why not said:
as hot as she is, she's obviously got some major problems, and i still find this as creepy as if it were a hot guy teacher and a 15 year old girl.

i feel sorry for the kid - this kind of thing has to fuck you up.
Click to expand...

are you crazy?
a hot OLDER broad wants to bang the shit out of you.......hello huge ego boost, who cares if she is bat shit insane...that just makes the sex even better
where is the problem???

as hot as she may be, she's still a pedophile.

if she was willing to ride you junk would you be complaining at 15???
i think not
W

basketballjones said:
if she was willing to ride you junk would you be complaining at 15???
i think not
Click to expand...

but losing your virginity to a fucked up pedofile, who continues to send you nudie photos after she's already gone to jail for fucking you?
when the whole country has an opinion about what you went through, and most of them are saying "what'st the problem?"?

granted, i would have gone for it at 15 as well, but i think at that age, and in that situation it would probably fuck me up more than anything.
P

the kid was lucky and he fucked it up by telling his parents.