Jeffsus said:
The lower frequencies are the sidebands that wouldn't exist in the real sound. And everyone should be able to hear those.
Click to expand...

The 1khz band around the carrier/principle is pretty darn attenuated, but yes it does appear to exist. The garbage in the lower frequencies is at too low power to be audible.

I think this MP3 is doing a reasonably good job of playing the 15khz sound. Whether or not your speakers are pumping it out, is a different story (although both my headphones and laptop speaker played it, just barely audible).

I agree a better test would be a WAV file at a sufficiently high sampling rate, and using a higher frequency tone, with an extra notch filter added for kicks.
Last edited: Feb 27, 2009
J

why not said:
i've often wondered about the relationship between MP3 data compression artifacts and the source frequency - do you know if it's worse at higher frequencies (which was my assumption), or if it's independent of frequency?

i know that MP3 haters like to ballyhoo about the lack of low end, but i always assumed that the low frequencies would show the least artifacts.
Click to expand...

"Regular" recordings (like audio tape, vinyl, .WAV, etc.) work by recording a sound wave directly. Analog recordings can 'sample' continuously, but often not accurately. Digital recordings sample accurately but not continuously. To approximate continous sampling, the data size will increase exponentially. It's impossible to get a perfect replication from a digital recording, but, if you let the data size get very large, then the approximation is better than most speakers can reproduce anyway.

MP3 does not record sound directly. Instead, it records which sine waves are, approximately, present in a sound during a small time period. (MP3's will quote that period as their 'sampling rate', but it's obviously a different meaning)

The math behind it says that any waveform, including a 5 minute waveform of any music track, can be perfectly replicated if you add up an infinite number of basic sine waves, each sine wave of a different frequency. Of course, it's impossible to list an infinite set of frequencies, but if you list just a few frequencies, and change that set often, then you can get a very good replication of a waveform without having to list very much. So, a decent sounding MP3 can closely approximate real music while using very little actual data (compared to direct sampling).

So, an MP3 can equally well replicate low frequencies as high frequencies, so to answer your question, yes MP3 quality is independent of frequency.

HOWEVER, higher frequencies tend to be more complex, that is, they might be speaking voices or instruments with timbre, etc. and this means that there are a great number of high frequencies added together to get the desired effect. It takes more data to list all those frequencies. A bass line has to be simpler by definition and so will always need less data to list accurately. Since the 'bitrate' of an MP3 is capped, there will need to be sacrifices, and proportionately those affect the high frequencies more, simply because more data is used there. To that end, high frequency (hi-hats, snare drums, michael jackson) sounds will, physiologically at least, seem more distorted than basslines (james earl jones).

by my calculations the readings are way off the charts!

ndrwrld said:
you heard it, and you think it's bullshit ?
Click to expand...

Just because I heard it doesn't mean it's BS.. a sample of 1 won't prove anything
D

Who came up with this test? I don't believe that most people over 25 cannot hear over 16kz. I think people that are not hearing this is because their speakers are unable to reproduce the sound and not because their ears can't perceive it.

The prominent frequency in this test is 15,015Hz (that spike you see below). Considering the range of normal human hearing is between 20 Hz Jamaican bass up to a cock rock 20,000 Hz, this sound falls well within the range of average human hearing even if you're a bit older. 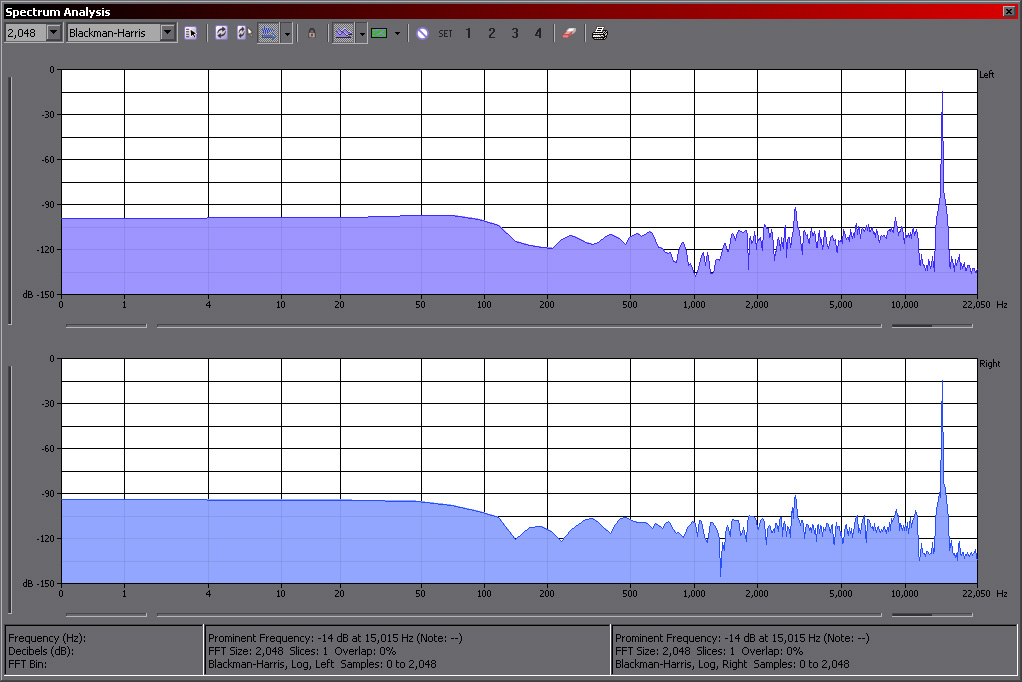 So don't worry, you're all still old.

why not said:
the principle isn't bullshit, but using an MP3 as an example is bullshit.

Mp3 is perfectly capable at reproducing the frequency contained within the file. Artifacts aside, the lossy process of an mp3 encode wouldn't produce them to the extent that they would overwhelm the prominent frequency in the file. Suppress the other freqs with an eq envelope and i guarantee you people will still hear it.
M

This page claims to broadcast the sound at the correct 17.4 kHz

Jeff/Rob, apart from high-freq distortion, i always thought mp3 encoding throws out low-*level* information, not necessarily low-frequency information. does that correspond to what jeff is saying?
S

millicent said:
This page claims to broadcast the sound at the correct 17.4 kHz

um, so my wife can hear it, but i totally can't. Am i going to die?

millicent said:
This page claims to broadcast the sound at the correct 17.4 kHz

Those are the WAV files.

I can't so much "hear" them as be made completely uncomfortable and sort of sick to my stomach. But there is some high pitchiness going on.

I can just barely hear the steady 17.4kHz tone, but the oscillating tone is pretty obvious.

I would question the wisdom of playing that sound in public places to discourage teenagers from loitering though. Even if you can't consciously hear the noise, I imagine your brain is still processing it on some level, which would make you tired/annoyed if you were subjected to it all day (ie adults who work in a mall playing this sound).

The same thing has been shown for fluorescent lights. Even though they flicker at a rate that is higher than the human eye can discern, the brain still "knows" the light is flickering and it leads to fatigue and makes it more difficult to concentrate. The fact that almost every office or institution relies almost exclusively on fluorescent lights is pretty stupid.
Last edited: Mar 1, 2009
You must log in or register to reply here.
Share:
Twitter Reddit Pinterest Tumblr WhatsApp Email Link
Top