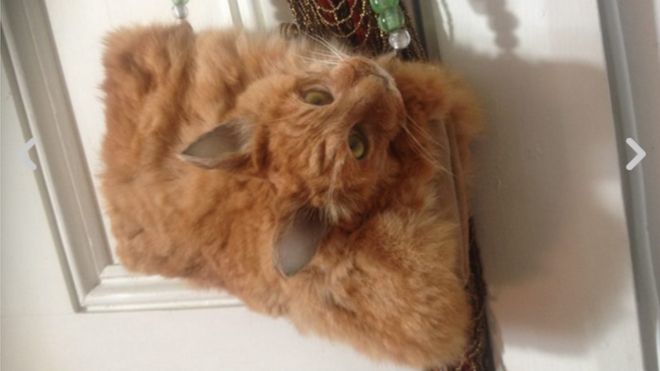 A controversial handbag made of a dead ginger tomcat has sold online for more than NZ$500 (US$365).

The “cat purse” was made from the pelt and head of a dead feral cat by a taxidermist in Christchurch, Claire Third.

Third had hoped to make more from her unusual creation, which has attracted mixed reactions from buyers in New Zealand and around the world.

Third told Fairfax New Zealand that she found the dead cut run over on a rural road in Canterbury and had kept it in her freezer for three months while she searched for an owner.

When no owner came forward, she decided the cat was feral and proceeded to turn him into a handbag.

Third received intense criticism for her creation during the online auction but she vehemently defended her work, saying the artistic focus and attention she paid to the handbag showed respect for the animal.

“To spend all that time on tanning and sculpture and making it brand new shows the utmost respect,” Third told Fairfax.

“A lot of people think I’m a cat hater, animal hater – I’m absolutely not. I’m the softest thing out there when it comes to animals.”

Third chose to feature the head of the cat because it “had such a pretty face”, and wasn’t squashed, like the rest of its body. Third said if people eat meat and wear leather they should have no issues with using a dead cat for fashion.

“There has been good reaction, bad reaction and crazy reaction,” Third told Radio New Zealand. “People have been telling me to leave the country.”

The handbag was initially listed for a buy-now price of NZ$1500, but on the last night of the auction the reserve was dropped to NZ$1.

The cat handbag is only the second time Third has worked with a cat’s pelt – she usually creates her work using deer, tar, goats, rams and bulls. A unicorn also created by Third is still for sale on Trade Me.