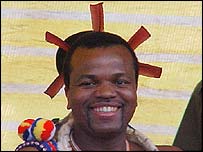 Mswati is Africa's only absolute monarch
Swaziland's schoolboys are coming to the end of a fortnight spent weeding the king's fields, which led to the postponement of the new school term.

Schools were supposed to reopen on Tuesday but King Mswati ordered that they stay closed for an extra week.

The weeding of the 10 vast royal fields is due to come to an end on Friday, before the king makes a public speech.

Some 30,000 children were affected by the order but not the king's children who are in private schools.

Some parents complained about the short notice of the royal order, which was issued by the king the day before schools were supposed to reopen.

Ellen Mavuso of Pigg's Peak, in northern Swaziland, complained that she had already taken her two daughters to school in the south of Swaziland, about 120 kilometres from home, only to be told of the order.

She wondered how the weeding of royal fields was related to the opening of schools.

Earlier this month, he asked the government of the drought-hit country for $15m to build new palaces for his 11 wives.