Snowy owls arriving in Ontario in droves for IRRUPTION: a giant afterhours party 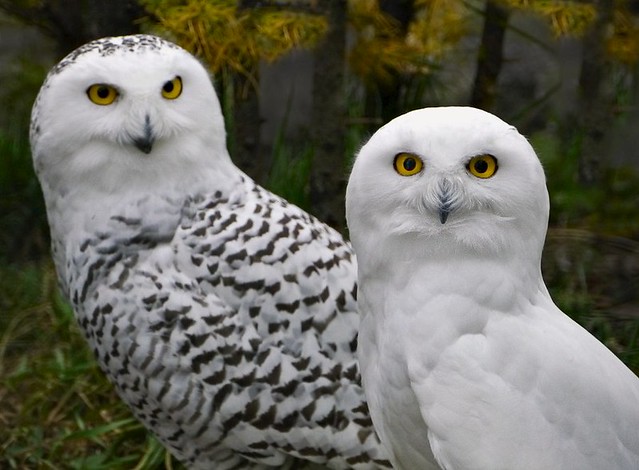 Snowy owl 'epidemic' sweeps across Ontario
'Why we have these epidemic years is a bit of a mystery,' airport official says
CBC News

Snowy owls have flocked to Ontario in huge, rare numbers for the second consecutive year, creating a boon for bird watching and a bane for airport managers.

Last year marked the largest invasion of snowy owls ever recorded in eastern Ontario, and similar numbers are expected this year.

In southern Ontario, Staff at Windsor International Airport expect to trap, band and release 35 snowy owls this winter. That's about the same amount as last year.

At least a dozen snowy owls showed up in the month of December alone, airport manager Phil Roberts said.

"At the very end of December, we've had four to five [banded] in the course of a couple days and still two to three birds that are loafing around," Roberts said.

Once a bird is trapped, the airport keeps it for 24 hours, bands and measures it, then drives it 50 km away to either to Belle River or Holiday Beach.

"Snowys are heavy birds and they also have no experience with humans or machinery, including aircraft. So the fact is they don't react fast enough to stay out of the way of aircraft and because they're so big, the probability of an aircraft being damaged from hitting a snowy is very high," Roberts said. "So any owl of that size, or any critter of that size in the near runway environment, posses a fairly significant hazard to aviation. And it's why we put so much effort into trapping them and relocating them."

Roberts says the airport has been hazing the birds by driving by and honking horns and making other noise to keep them off the airfield.

"And you'll chase them and they'll loop around you and come back to the same spot," Roberts said. "From a behaviour modification standpoint, you have to put way more effort into a snowy owl than you do to something like a Canada goose for example."

The airport has five traps. Few birds that are trapped and banded ever return, Roberts said.

There are several theories as to why the birds are venturing further south, ranging from climate change to dwindling lemming populations, which is the bird's prey.

"Why they come out of the Arctic and why we have these epidemic years is a bit of a mystery," Roberts said. "Typically, with an epidemic year, you see the epidemic year, then you don't see that big invasion for 10 to 15 years. It looks like we're dealing with this two years in a row."

The snowy owl has also returned to the Ottawa area with at least 50 owls spotted so far. Snowy owls have been spotted near Kanata, Barrhaven and Manotick.

The Ontario invasion of snowy owls in 2013 was called an irruption. This year, the second year of the phenomenon, is called an echo.

An irruption is a dramatic, irregular migration of large numbers of birds to areas where they aren’t typically found. An echo year occurs when the same phenomenon occurs the following year.

Send them to Drake's house...
H

This made me chuckle.

saw one right near an onramp at QEW and Red Hill last tuesday.
stopped and asked if he needed a ride, but he said he was cool.