burton is live, so the gates are open to start praying for snow (and start gettin hyped for gear).

here are some new innovations to look out for this season.

very rarely is there a snowboard innovation that sends snowboarding leaps and bounds forward. it seems that the boys at mervin have once again led the way with new tech that every other snowboard mfg is trying to copy. they introduced magnetraction, wiggles that work. last year they introduced banana technology, reverse camber, on the libtech skate banana and trs banana, making their boards feel more like a skateboard. this year, nearly all of the boards under the mervin umbrella (lib and gnu) are offered with btx (banana+magnetraction) and mtx (magnetraction). reverse camber lets you butter, bonk, and float better than you could with a cambered stick, with no hang ups. 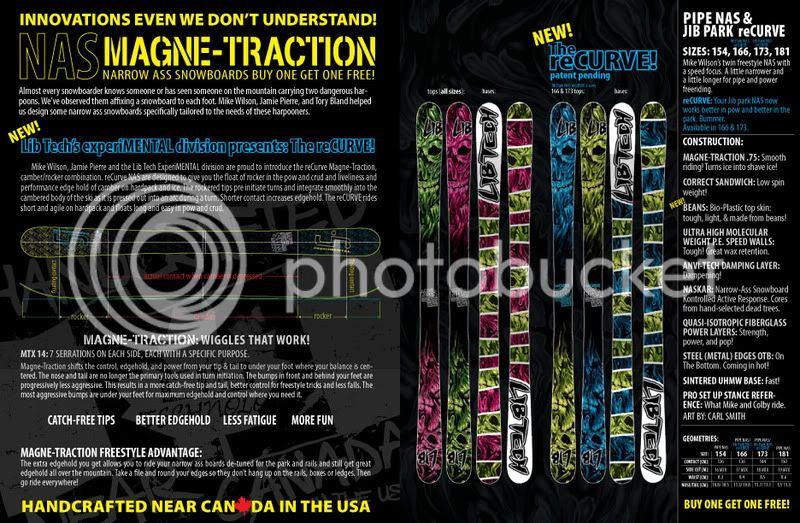 burton is on board with the introduction of their zero camber burton fix.

the burton experimental division has taken the reverse camber even further with the new v-rocker. the v-rocker creates a center rocker point between your feet, with additional rockers towards the nose and tail for insane foot control, press-ability and pop. look out for the v-rocker in the burton con-dom, lip-stick, and hero (winner of tws snow under $400 good wood).

also look out for zero camber on the ride crush dfc

and the rome artifact 1985 reverse camber

nearly all of the burton 2009 lineup features the single slider ics (infinite control system) that works with the est (extra sensory technology) binding system, giving you unlimited stance options and the purest connection between you and your board. once you ride an ics board with est bindings, you won't want to ride anything else. it fukkin rules (better than mtx or reverse camber imho). read more about burton tech here.

on the binding front, look out for the new contraband binding from ride. they have eliminated the front toe strap resulting in a light and flexible binding with quick in and out.

ride has also included pop rods in the construction of their boards, adding insane pop to the nose and tail while keeping the space in between your feet soft and buttery.

i'm riding this year's ride society, and holy shit does it pop. you can ollie for days on this stick.

and to get you stoked for the upcoming season, here is the trailer for the long awaited forum dvd, forum or against em

this season is going to be epic. 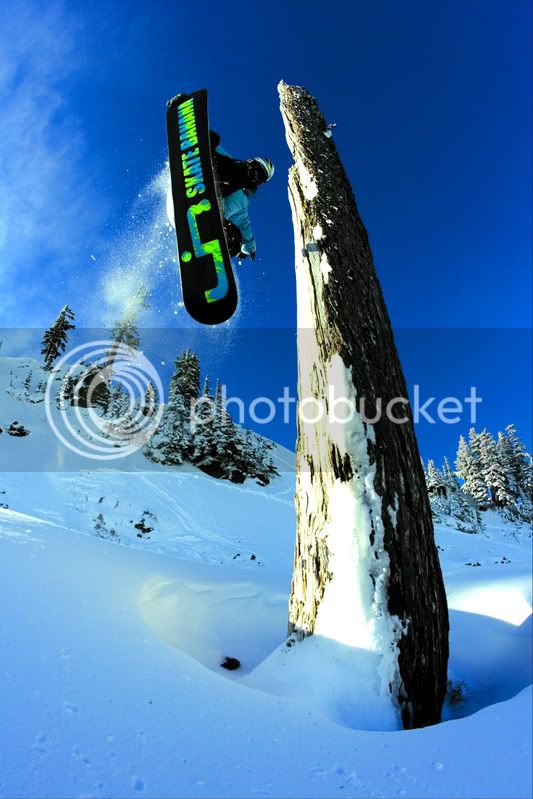 This season I'll be rockin a Prior AMF 159 and a new pair of Burton Co2 bindings. All terrain stompin.
T

Those contrabands look wild. I'd love to try them out but considering i spend 60-70 percent of my time chasing powder and freeriding they probably won't be the best investment. If I still lived in Ontario though, I might be persuaded to rock those puppies. It'll be interesting to see if they're durable enough to last through the grind of a full season. Recall the flops from a few years back when K2 tried to create a step-in model to tap into Flow's market...brutal.
O

This season I'll be rockin a Prior AMF 159 and a new pair of Burton Co2 bindings. All terrain stompin.
Click to expand...

jer, the co2s are deadly as fuck. you are going to have so much fun with them...and the prior is tip of the spear. surprised you got such a long stick. looks like you're plannin' to ride some big mountains this season

i'm riding the burton custom x 164w with co2 est bindings for charging big mountain, and a ride society 157 with last year's rome targas for park. i might switch up the targas for a pair of 2009 ride alpha bindings. they'd kit up noice with the society. i'm sort of a red and black whore.

revelstoke or bust! this is the resort to be watchin' out for. 5,620ft of vertical descent, the longest in north america, serviced by lift, cat, and heli. not to mention that the snow is siiiiiick. if you're makin' it out west this season, make sure revvy is on your list (and kicking horse).
X

i cant wait for the snow. i'm going to make at least one big trek out to the west coast, but i haven't figured out where. Revelstoke is definatly high on the list though.

I might get a new board too, i've been rocking my K2 Darkstar for about 6 seasons. Might be time for something new (even though that board is still awesome).
O

My Skate Banana sits in the corner, silent, mocking me. It demands... butters.

I've also got an O-Matic Boron that hasn't touched snow yet. I picked it up late season last year and couldn't give up the banana. I fully intend to flog it early this season, see if the upstart company has the goods.
Also rocking a new set of Ride Beta MVMTs in flat black. My first Ride bindings without the Roller Ratchet (RIP). They're light as hell and the UL ratchet system seems okay. Looking forward to seeing the response out of them.

Other than that I got a brand new jacket and pants waiting to keep me warm when the white stuff starts dumping. I'm already dreaming of it.
K

this is the first year i'm excited for winter again!

...might have a bidnez op in revelstoke and could be moving there shortly. heh. can't wait to ride it.

i am looking forward to sucking less.
E

RIDE Society all the way, I'm rocking that board this year after Riding the Business for a while.
M

Just signed up with the Alberta Snowboard Association. I'm going to try my hand, my feet rather, racing snowboard cross this winter. I did it two years ago in Ontario and had a blast. Looking forward to getting back into it and I'd recommend it to anyone who likes hauling ass and enjoys a serious adrenaline rush.

You guys are killin me.
O

Seriously.. but I guess it starts when the vendors release all their new hype, I mean gear. Not everywhere is an Ontario where it rains in January.

Also Muad'ib: note the name change of the thread. Hurry up and feel included already.
S

dear ontarian blue mountain goers,
when you go up there during a winter weekend (or weekend day) do you generally try and crash at friend's places, pay for your own accomodation or drive and drive home each day?
O

Drive.. I probably hit that mountain over 50 times last season and I only stayed up on two occasions.
S

I drive back and forth each day. Speaking of which, I've got room for 3 every time I go for those interested in shredding!

when I used to live there and Blue was my home hill, I'd def make the drive. sometimes I'd go nightriding on a sunday and stay over, coming back in the morning, but usually suck it up and drive both ways.
C

starr said:
dear ontarian blue mountain goers,
when you go up there during a winter weekend (or weekend day) do you generally try and crash at friend's places, pay for your own accomodation or drive and drive home each day?
Click to expand...

I drove there and back, 35 times last year. I'm in Brampton so it's a bit closer than Toronto. Not looking forward to this season's gas prices.

Anyone know when Blue is going to expand the area at the laft hand end?

If anyone is looking at new skis this year, check out momentskis.com - their skis are absolutely top notch, bomb proof, hand made by skiers, and they are generally just an awesome group of people to deal with.
S

thanks for all the answers. that's what i assumed most people do, but was just checking
J

WAAAAAY to early. I understand though Norm, it's probably already late fall in Calgary.
M

OTIS said:
Also Muad'ib: note the name change of the thread. Hurry up and feel included already.
Click to expand...

i did notice, and felt included. just figured i had to stay in character.

i am as stoked as ever for winter! i got a new setup at the end of last year, my mid-week already paid for, and only need a beacon and i am set for backcountry touring.