Shiva’s abode was the burning ground, which was “covered with hair and bones, full of skulls and heads, thick with vultures and jackals, covered with a hundred funeral pyres, an unclean place covered with flesh, a mire of marrow and blood, scattered piles of flesh, resounding with the cries of jackals” “There is nothing purer than a cremation ground,” Shiva declared.
The hosts of ghostly beings that are his companions loved to dwell there, and Shiva did not like to stay anywhere without them - MBh.13.128.13-16, 18 -

Revulsion as a means of detachment had its form in the imagery of the cremation ground. It dwelt not on the cessation of life and the purgation of the body through the consuming fire, but on the byproducts of physical integration. Though gruesome, they were less terrifying than disgusting. Revulsion in its last degree of sublimation reaches up to holiness. Shiva had turned away from procreation and dwelled in the cemeteries where he liked to stay. His ‘necrophilia’ complemented his aversion to procreation.

The explanation that the dreadful ghosts concentrated there around him would not harm people who thus could live free from fear was only part of his entire statement – which meant that those who feared the awful ghosts were destined to remain outsiders. Only heroes could be near him in the cremation ground, heroes who had defied death and liberated themselves from passions and fear. These were the true devotees of Rudra in his form of dread.

The metaphor of the cemetery is on the same level of intensity of realization with the myths of Shiva dancing while he carried Sati’s dead body. These extreme situations are symbols of Shiva’s power that defies death. Shiva liked his ghostly entourage. It attracted to his presence those who had nothing to fear, who had mastered the onslaught of the multiple categories of threatening powers that were fatal to those who were less than heroes, and who could not control the frightening phantoms because they had not controlled themselves.

The rite of cremation, well known in many countries of the ancient world, has a special justification in the case of the Hindu because of his belief in the reincarnation of the soul in a new body, human or other, a belief which excludes the idea of the resurrection of the body as held by Christians and Muslims, who ordinarily look forward to the miraculous reanimation of the corpse by divine decree at the Day of Judgment. [Therefore their elaborate tombs] From the Hindu point of view, it is evident that when the soul quits its mortal tenement, that tenement is of no further use or value, and its destruction by the purifying element of fire is for him a reasonable and convenient mode of disposing of the dead.

The Aghoris emulate the most extreme characteristics of Lord Shiva as the Conqueror of Death: his favourite haunt is the cremation-grounds; he bathes in cremation-ashes; he wears a garland of skulls and bones; he keeps spirits and ghosts for company; he is continuously intoxicated; and he acts like a madman.

The Aghoris willingly transgress all ascetic (and Hindu) taboos, convinced as they are that by 'reversing all values' they will speed up enlightenment. While all sadhus are supposed to be vegetarian and teetotallers, Aghoris eat meat and drink alcohol.

Even more horrid habits are attributed to Aghoris: they eat the putrid flesh of corpses; they eat excrement and drink urine, even of a dog; they have ritual intercourse with menstruating prostitutes on the cremation-grounds, where they usually hang out; and they meditate while sitting on a corpse.

It is questionable whether all this is regularly done, but it seems quite certain that at least occasionally, and then in a ritual context, as a kind of 'eucharist', these cannibalistic and other 'inhuman' acts are still taking place.
Aghoris preferably live on cremationgrounds and surround themselves with artifacts of death, like human skulls out of which they drink and with which they perform magical rituals. Nonetheless, the Aghoris represent a tradition that is thousands of years old, and there have been times that the sect was quite numerous.

Drinking out of a human skull is only one of the striking peculiarities that differentiates Gauri Shankar Mishra from the average ascetic. He drinks liquor (forbidden to caste Hindus and certainly ascetics), eats the flesh of dead animals found in the street and abuses people with foul obscenities.

The skull cup, known as kapala in Sanskrit, is fashioned from the oval upper section of a human cranium. It serves as a libation vessel for a vast number of Vajrayana deities, mostly wrathful.

As a ritual implement, the selection of the right skull is of immense importance for the success of the ritual. The skull of a murder or execution victim is believed to possess the greatest tantric power; the skull of one who has died from a violent or accidental death, or from a virulent illness, possesses a medium magical power; the skull of a person who died peacefully in old age has virtually no occult power. The skull of a child who died during the onset of puberty also has great potency, as do the skulls of miscegenated or misbegotten child of unknown paternity, born from the forbidden union of castes, out of wedlock, from sexual misdemeanor, or particularly from incest. The 'misbegotten skull' of a seven or eight-year-old child born from an incestuous union is considered to possess the greatest power in certain tantric rituals. Here the vital force or potential of the skull's 'previous owner' is embodied within the bone as a spirit, rendering it as an effective power object for the performance of tantric rituals.

As the libation vessel of the Vajrayana practitioner, the skull cup essentially parallels the clay pot (kumbha in Sanskrit) of the Vedic sacrifice, the alms bowl of the Buddha, and the sacred water vase (Kalasha in Sanskrit) of the bodhisattvas. As a receptacle for sacrificial offerings presented to wrathful deities, it parallels the precious tray containing auspicious substances-the jewels, flowers, or fruit presented to peaceful deities. In its most benign symbolism, as the begging bowl or food vessel of an ascetic, the skull cup serves as a constant reminder of death and impermanence.

In the iconography of wrathful protective deities the skull cup, held at the level of the heart, may also be paired with the curved knife or chopper which may be held above the skull cup. Here the chopper is the weapon that severs the life veins and vital organs of demonic enemies, and the cup is the oblation vessel in which the blood and organs are collected as the deity's sustenance. Descriptions of the contents of a wrathful deity's kapala include warm human blood, blood and brains, blood and intestines, human flesh and fat, the heart or the heart and lungs of an enemy, the heart of Mara and the blood of Rudra. 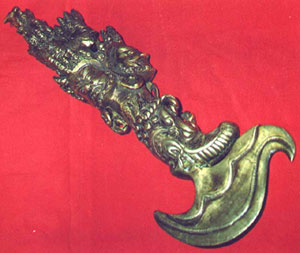 The chopper is one of the most prominent weapons used by Buddhism's angry deities, both male and female. Continuously brandished by them or simply carried in their hands, its purpose is to chop up disbelievers.

This curved flaying-knife is modeled on the Indian ' knife of the butchers', used for skinning animal hides. The gibbous crescent of its blade, which terminates in a sharp point or curved hook, combines the flaying implements of a cutting-knife and scraping blade, and the piercing activity of a dagger or pulling-hook. The blade's crescent is used for cutting through flesh and scraping it clean, separating the outer and inner as 'appearance and emptiness'. The sharp hook or point of the blade is used for the more delicate acts of flaying: the initial incising of the carcass, the pulling out of veins and tendons, and cutting around the orifices of the skin.

An interesting but somewhat disturbing legend is related about the Mahakala 'protector chapel' at Samye monastery in Central Tibet. Traditionally, this forbidding chapel was kept locked for most of the year and entry into its precinct was rarely permitted. The attendant monk who supervised the chapel would each year ceremoniously replace an iron chopper and wooden chopping board which had become blunt and worn down by its nocturnal activities. Even though the chapel was locked and empty, at night the screams of the ethereal miscreants hacked under Mahakala's chopper could be clearly heard from outside the chapel.

In Mahakala's symbolism the curved knife cuts through the life veins of enemies such as oath-breakers and hindering spirits; and his skull cup is filled with the heart-blood of these enemies. This crescent shaped chopper, held by deities such as Mahakala, corresponds in shape to the cavity of the skull cup and functions to make 'mincemeat' of the hearts, intestines, lungs, and life-veins of enemies hostile to the dharma, which are then collected in the skull cup.