The flagship model was unveiled at Mobile World Congress in Barcelona along with Gear Fit - a wearable fitness device
It has a 5.25-inch screen, 16MP camera and runs Android KitKat 4.4
Software and icons now look similar to Apple's 'flatter' iOS design
Handset comes in four colours: black, white, blue and gold and is dust and water resistant
Prices have not yet been announced but it will be available in April

In a world almost bursting at the seams with fitness bands, smartphones, wearables and cameras it takes something special to stand out - and Samsung hopes its new Galaxy S5 will do just that.

The Galaxy S5, dubbed the 'superphone' has handpicked features from its competitors and put them all into a single handset.

Samsung claims it crams in a professional camera and a powerful fitness tracker while being water and dust proof - and comes with fingerprint sensor technology, just like arch rival the iPhone 5S

It will go on sale in April, although prices have not yet been announced.

The Galaxy S5 is at the head of a move by tech giants to turn the ever more sophisticated mobile phone into a substitute doctor and personal trainer.

Samsung’s S5 has its own health functions, but it will also connect to the company’s second generation smartwatch, the Gear 2, as well as a new wearable band device, the Gear Fit, which will play a role in measuring fitness.

The watch and fitness band can pick up the pulse through the skin on the wrist and display it on the small screen throughout a normal day, or during a workout.

All of the information gathered by the devices can be used to calculate the number of steps taken, calories burned and general fitness.

The firm’s ‘S Health 3.0’ software creates graphs or tables of the results to track changes in activity and health over time.

Samsung’s apps can then develop a fitness regime, including a range of activities from jogging to climbing the stairs rather than using the lift, to help people improve their health.

'You can monitor and track each of these areas with Samsung's Lifestyle Coach app. Part of the S Health suite,' the company said.

'We’ve decided to go back to basics with the Galaxy S5 and focus on the features and things that matter the most to our customers – namely the camera, ability to view and download data and content quickly and their health and wellbeing,' said Simon Stanford, Vice President of IT & Mobile division, Samsung Electronics UK & Ireland.

'People want a smartphone that enhances and enables their mobile life.

'The Galaxy S5 represents just that and we’re excited to see the response to our latest flagship smartphone device.'

The S5 has a 16MP camera - an improvement on the 13MP camera seen on the S4 - and features a number of advanced editing and focus tools similar to those on the 5S.

The camera has phrase-detect as well as contrast-detect autofocus, which Samsung claims is the fastest autofocus in any smartphone.

Samsung's Galaxy S5 has got better battery life than its predecessor.

Even when the battery is on 10 per cent, it has 24 hours of time left before it gives up the ghost.

The Galaxy S5 features a perforated pattern on the back cover creating a 'modern glam look'.

Its new contoured shape comes in an array of colours, including: Charcoal Black, Shimmery White, Electric Blue and Copper Gold. It is dust and water resistant.

VP of electronic communications at Samsung, Jean-Daniel Amye, said: 'The finger scanner uses your fingerprint as the ultimate password to your identity.

'All it takes is a simple swipe of your finger to make secure payments.

'Also finger scanner unlocks Private mode where secure files can be stored. I can now keep my passport in a secure way'.

Mr JK Shin, president and CEO of Samsung Electronics said: 'Samsung has been one of the major contributors of the mobile industry's high growth.

'Especially, the Galaxy S series has been a key driver of smartphone growth.

'A total of 200 million people use Galaxy S devices, he added.

'Our consumers want a simple yet powerful camera.

Samsung’s S5 has its own health functions, but it will also connect to the company’s second generation smartwatch, the Gear 2, as well as a new wearable band device, the Gear Fit, which will play a role in measuring fitness.

The watch and fitness band can pick up the pulse through the skin on the wrist and display it on the small screen throughout a normal day, or during a workout.

All of the information gathered by the devices can be used to calculate the number of steps taken, calories burned and general fitness. 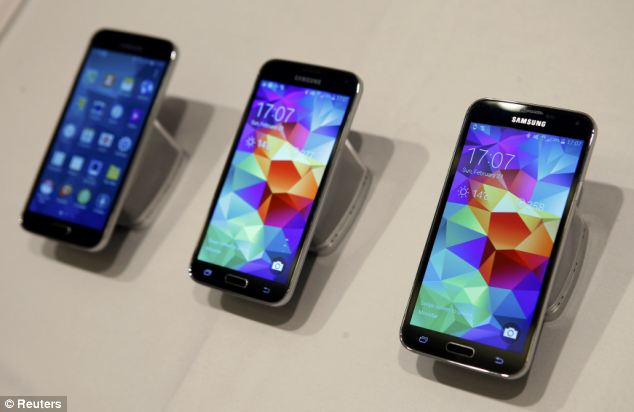 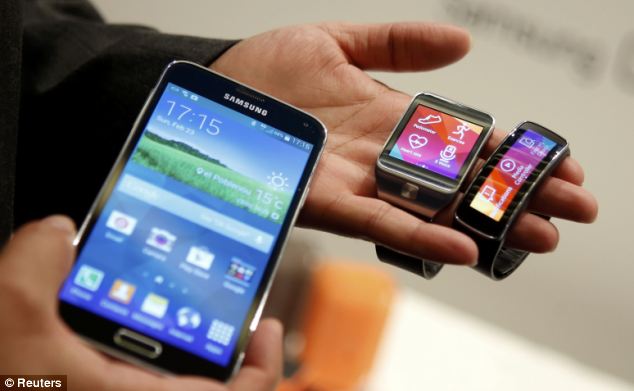 full details here
Is this the best smartphone ever? Samsung unveils its slick Galaxy S5 that comes with super-fast Wi-Fi, a 16MP camera and fitness features including a built-in heart monitor | Mail Online 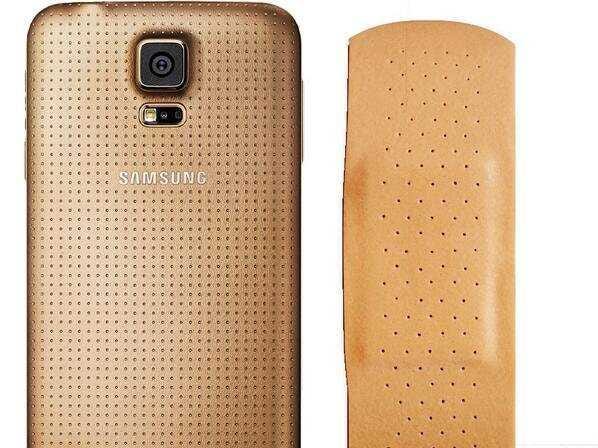 The guts look great but they have to update the design. The LG Nexus 5 is beautiful and this is still the same Galaxy form factor since the S3 with an ugly back.

I'll probably go to this when I get my upgrade because my S3 works so well with my TV and this has infrared so i can use it as a remote but I'm disappointed with how it looks.

Tempting. When does the new HTC One drop?