Two people have appeared in a South African court, charged with illegal trafficking of human organs. 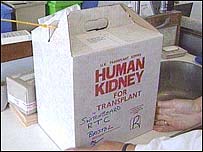 They are accused of being part of an international syndicate which buys body parts from poor people in Brazil and Israel for use in South Africa.


In many Western countries, there are long waiting lists for human organs such as kidneys, livers and bone marrow.

South Africa hospitals have a worldwide reputation for their expertise in the field of organ transplants.

Nine Brazilians and two Israelis have also reportedly been arrested in north-eastern Brazil in connection with the organ ring.

"In all, they managed to talk 30 men into selling one of their kidneys," said Wilson Salles Damazio, head of the Federal Police branch in Pernambuco state.

He said that those who passed medical tests were sent to South Africa, where their organs were removed, before flying back home.

South African police have interviewed several Brazilians and Israelis staying in Durban, allegedly brought there to sell their organs.

Israeli citizen Agania Robel, who is 41, was reportedly arrested after undergoing a kidney transplant.

According to The Star newspaper, it is alleged that he bought the kidney through the syndicate.

Sushan Meir, 49, a South African of Israeli origin, was granted bail of 15,000 rand ($2,400) for allegedly being involved in a kidney-transplant transaction.

Police are expected to turn their attention next to medical workers in two Durban hospitals.

St Augustine's hospital has confirmed that it is helping police with their inquiries.

The investigating officer, Captain Helberg, has said that the investigation into the matter does not involve the hospital being party to any illegal transactions.

Investigators believe the illegal trade has been going on for more than a year and more arrests are expected.

"We are looking at members across the globe. We have had successes in Brazil, Israel and South Africa, but we suspect it is much wider," said Police spokesperson Mary Martins-Engelbrecht.

If you thought the child sex trade was bad wait tell you here some of the details on this one!!!

happens in the phillipines, and turkey all the time.

If it's consensual, should it be illegal?

My buddy's dad used to be a doctor in Saudi Arabia and used to treat some of the Royal Family. Apparently each prince has a literal body double whose sole purpose in life is to be an organ donor should the Prince need it. Imagine living your life like that?

I'm so afraid of losing a kidney this way, I ingest large amounts of nephrotoxic chemicals...
P

FUCK...I just looked, and there seems to be scar where one wasn't before...

AND SINCE WHEN IS IT DECEMBER?
E

If it's consensual, should it be illegal?
Click to expand...

As for the legality of it, I don't know. Part of me supports the genetic growing of body parts and creating "Body banks" for people that need transplant surgery, but another part of me realizes how unpleasant that could and most likely would get since the private sector would be all over that like stink on shit, and create a worse situation for organ donors and transplant patients than they do currently with some pharmaceutical companies with people that need medicine.
P

Originally posted by el presidente Highsteppa
Part of me supports the genetic growing of body parts and creating "Body banks" for people that need transplant surgery
Click to expand...

I wouldn't worry about that, since it is an impossibility... body parts cannot be grown on their own, and they never will be, since they are part of an inordinately complicated system that we know nothing about, and never will, really...