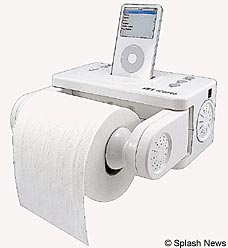 The iPod that let's you roll with it

It is designed, according to the US manufacturers, to "enhance your experience in the smallest room".

The gadget, which costs around $99, or £54, merges an iPod docking station with a loo roll dispenser.

After music lovers have downloaded songs from the internet on their iPod, they can place it in a socket in the top of the dispenser.

Then while sitting on the toilet, using the shower or luxuriating in a bubble bath, they can listen to their favourite tunes.

The device delivers high-quality sounds from moisture-resistant speakers, according to the manufacturer Atech Flash Technology.

It also re-charges the iPod while playing songs - either pre-programmed or a random selection.

The iCarta, which is 8 inches wide, 7 inches deep and three inches high and designed to be mounted on the bathroom wall, is powered by rechargeable batteries.

It is the latest hi-tech contraption that features an MP3 player.

Manufacturers have already produced a robotic dogs that 'dances' when someone connects it to a music player and DJs are beginning to forsake vinyl records and CDs for mixing desks which use iPods.

And in April, the Mail told how the latest model of the classic Swiss Army Knife featured a detachable MP3 player.

It meant owners of the state-of-the-art knife could store and play up to 250 songs downloaded from the Internet.

One website which reviews the latest technology described the iCarta as "one of the stranger iPod accessories we've ever seen".

But it is certainly ideal for anyone wanting to listen to rock band Oasis' number one single 'Roll With It'.

Because plugging into headphones and having the freedom to roam through your house isn't enough.

fantastic.
now ive gotta do the right thing...
buy an ipod, and then this thingy.
then i can fill the ipod with nothing but Tiesto, and wipe my ass with the entire contraption.

ndrwrld said:
fantastic.
now ive gotta do the right thing...
buy an ipod, and then this thingy.
then i can fill the ipod with nothing but Tiesto, and wipe my ass with the entire contraption.
Click to expand...