Macho Man Randy Savage -- one of the greatest wrestlers of all-time -- died today in a car accident in Tampa, Florida ... TMZ has learned. 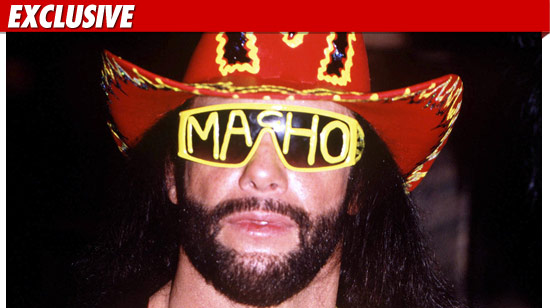 TMZ spoke with Randy's brother, Lanny Poffo, who tells us the wrestling legend suffered a heart attack while he was behind the wheel around 10 AM ... and lost control of his vehicle.

Earlier this month, Savage celebrated his 1-year anniversary with his new wife Lynn.

Macho Man began wrestling in the WWF in 1985 and became a superstar with his trademark catchphrase "Ooooooh Yeaahhhhh."

UPDATE: Florida Highway Patrol tells TMZ ... Savage was driving his 2009 Jeep Wrangler on a when he veered across a concrete median ... through oncoming traffic ... and "collided head-on with a tree."

Savage was transported to Largo Medical center, where he died from his injuries.


tis a shame, im sure he would have become more entertaining as he got older.


Let the tribe puns begin.
I

back in the day, my dad looked liked him. LOL

I wonder what ever happened to Elizabeth..was that her name?

Will never be in the hall of fame because he took Stephanie McMann's virginity when she was 14. Lol
Click to expand...

back in the day, my dad looked liked him. LOL

I wonder what ever happened to Elizabeth..was that her name?
Click to expand...

She died too: Miss Elizabeth - Wikipedia, the free encyclopedia

A lot of 80's wrestlers are dead: Wrestling Obituaries

so the rapture begins.
I

yeah, what would you put on a resume after that?
under skills list? can piledrive with the best of them?

I'm not sure those are transferable skills.
R

His match against Tito Santana for the IC Belt at the Boston Garden is still one of my all time favorite matches.
D

rip... loved those days of WWF.

Need to find a Macho Man Randy Savage shirt to wear at the cottage.
D

I had no idea Leaping Lanny was his brother

Respect to one of the greatest entertainers that ever lived!
S

ahhh i used to love watching macho man and the other dudes when I was babysitting. it was the only thing that was ever on that late.

Without him Jessi Slaughter's dad might never have settled on a personality!