Pretty good. Everyone is in good spirits no doubt. I fell in the mud slide just covered, then we ended up at a techno jam at Toika Lounge. The bouncers there were just at the festival and drove over. 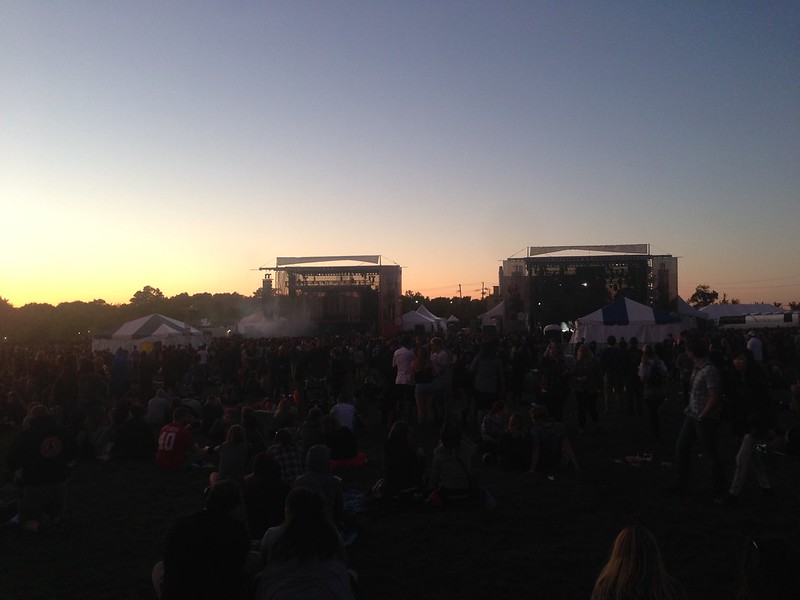 wanted to go just for The Cure but didn't want to bother with the rest of the lineup...hope they return with a solo show
P

Got a free ticket for yesterday.

DIE ANTWOORD fucking were so damned good. I can't stand them on record/youtube, but LIVE, live they are a gaddamned beast of an act. Very impressed. TONNNNNS of energy, charisma, originality, weirdness. Just a great live act. Only played for like 40 minutes which normally I'd complain about but it was an INTENSE 40 minutes. I now see why the mighty Aphex Twin (whom I respect a great deal) had Die Antwoord open for him on a tour a few years ago. Because they, like him, are weird as fuck - in the best possible way.

The rest of yesterday was nothing to write home about.

Death Cab for Cutie - ok, seen em twice, sort of boring
The National - put me to sleep
Dropkick Murphy's - caught the last 10 minutes and loved it.
Buzzcocks - unlistenable. I know they were influential in the late 70's UK punk scene and Cobain loved em, but it just sounded like shit to me.

We went for the end of the second night. Hooked up with some friends we found out were there.

One of the ladies had a drink ticket from Saturday, and apparently were invalid on Sunday, and wouldn't accept it. That's the only problem I had.

I took the ticket and went to the manager asking why they're scamming people. Whatever.

You had to look at the fine print on the ticket like anyone ever does. If you loaded up on a weekends worth of tickets on Saturday, you're SOL Sunday.

But anyway, I guess It is what it is with these festivals. Enjoyed the talent. The Saturday night was better with the Flaming Lips, and the Cure.

Security were super chill with me, had a wicked time except for the shithole hotel I stayed at.

btw, The Flaming Lips was INTENSE if you know what I mean.

Yeah, The Flaming Lips set was really special. I'm glad I was able to see that. The opening with all the confetti cannons going off was epic. I was recording it, but then realized my phone was full. So 5 minutes and it really stopped at 30 seconds lol.

Security and logistics were A+ no issues, and everyone was really nice. Just how they handled the Beverage tickets were a bit odd, and garnered my wrath.

I didn't see one unhappy person there. Getting the bus back to downsview station was a bit of an adventure.