Read All About It

Scariest kids show of all time. 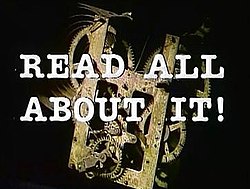 Read All About It! was a Canadian educational television series that was produced from 1979 to 1983 by TVOntario that aired during the early to mid-1980s; It also aired in repeats in the 1990s. It starred David Craig Collard as Chris, Lydia Zajc as Lynne, Stacey Arnold as Samantha, and Sean Hewitt as Duneedon, ruler of the galaxy Trialviron. In the second season Michael Dwyer joined the cast as Alex. The main goal of the show was to educate viewers in reading, writing and history. Each episode ran for approximately 15 minutes. Eric Robertson composed the music for the show being filmed in Brampton, Ontario.

The show is set in the fictitious town of Herbertville, where Chris inherited his uncle Derek's coach house after a mysterious disappearance. Chris and his friends Lynne and Samantha started a newspaper called The Herbertville Chronicle in uncle Derek's coach house. The coach house contained two artificially intelligent robots: Otto, a device which communicated by printing its thoughts on paper; and Theta, a talking computer with an integrated monitor. The coach house also held a transporter which allowed teleportation to and from the galaxy of Trialviron, as well as transporting many literary characters like the Queen of Hearts from Alice in Wonderland, Merlin the Magician from King Arthur and the Knights of the Roundtable, and Captain Hookfrom Peter Pan into the coach house. The first season focused on the newspaper uncovering a conspiracy by mayor Don Eden (the alter ego of Duneedon, the ruler of the galaxy Trialvaron) who wants to claim King's Park as his own to get a rare mineral he needs to invade Earth. The second season revolved around various storylines: Samantha moves away, but the group meets a new friend; the kids engage in battle with General Isaac Brockduring the War of 1812 (with a notable appearance of Graham Greene); they have to stop the Book Destroyer; and have a final confrontation with Duneedon.

I remember to watch this series when it repeated in the 90s, was too small to understand everything though and I lost track of second season because my family moved away and sold most of our furniture and stuffs including the TV. We had new TV right when it stopped showing. I like how the episodes presented as chapters in a book. I should buy DVD to finish watching though, or yeah on Netflix.
You must log in or register to reply here.
Share:
Twitter Reddit Pinterest Tumblr WhatsApp Email Share Link
Top