So...thinking of popping the question in NYC... headed there in a couple weeks but looking for some ideas...

Id really like to do soemwhere outdoor, with a view of the city at night...not looking to make a big spectacle of it with tons of people around...but wondering for some suggestions of WHERE.... never been in NYC before so would love some ideas..

Definitely thinking nature. Would love a nice view of the city lit up at night... i was thinkin central park but im told not to exactly go there at night..

I have no ideas where. But just want to give you props and congratulations....Tribe is rooting for you!
M

I mean, the park is not great at night but it's only certain parts. I don't know about any high points in the park other than the lazing rock piles.

How about a rooftop garden?

Fire suggestions away im more than willing to entertain some options... i just know id like to have a BIT of a plan before i do this ...
M

Another idea is not high up but if you go away from the island, you can get a good view of the city's skylines. The Brooklyn Bridge would be an interesting spot.

The problem with hotel rooftop bars is that they're always pretty busy unless it's like Tuesday night.

Forget the tourist places. They are packed elbow to elbow.

Another idea is to go to a hotel rooftop off the island like in Hoboken or Jersey Shore.
M

Brooklyn Bridge can be busy even at night.

check out some of the articles on Tablet.

The High Line at night looks like it's pretty: 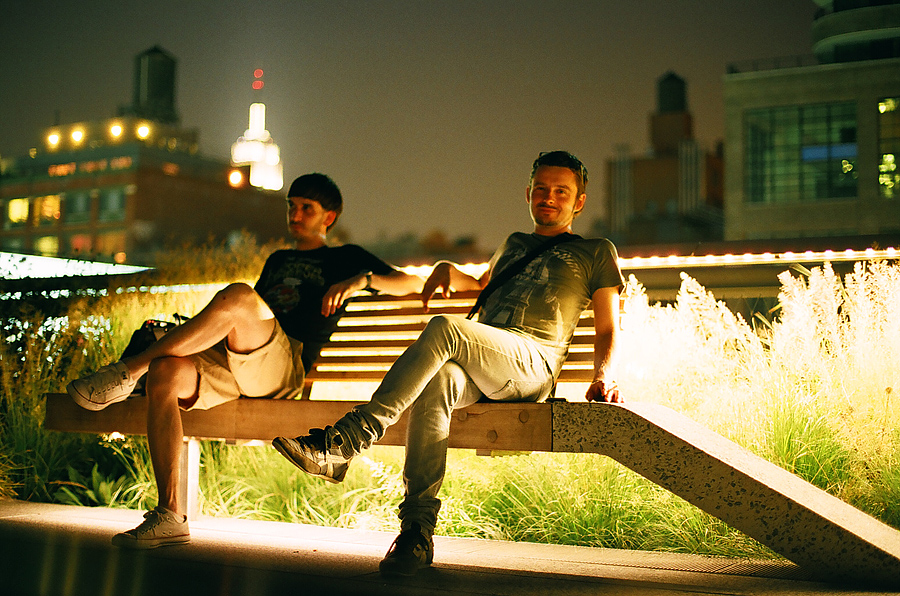 But it's only open until 11 and it's a park so the downside is no liquid courage.

A lot of nice looking places...my only thoughts with rooftop patios is chances are it will be busy with patrons...

im not exactly into the whole making a big scene, nor is Chris. I would much prefer some type of park or even the brooklyn bridge type deal where you have city line and im outside ... it seems that most of these rooftop patios are 'go-to' places which leads me to believe they will be extremely busy... it would be on a thursday night too
K

Anyway do what feels right, I proposed to my other half in Versailles France and it was a hit as I'm sure yours will be as well. Congrats
L

Followed by a stroll right next door on the Brooklyn Promenade afterwards.

Yeah, Thursday nights will be busy depending on which places. Sometimes I've been and they're completely dead especially above midtown. Some hotel bars are surprisingly dead because most people probably wanna party down near the street. Yeah, if you're not a scene person, I would go for something more unique but some of the hotel ones, unless there's an event, are pretty quiet and dead most nights.

The High Line is really nice. I would explode if someone proposed to me there. Or on the subway crossing the bridge.

If you can access a friend's rooftop, that would be great. If you do an airbnb sublet in an apartment, you can go right up to the roof via the fire escape. I've done that many times with a bottle of wine and a flashlight. Amazing views from people's roofs.

Some of the ferries are pretty dead at night. They're just commuter ferries that go to like Staten Island. The shoreline around the west and south side of Brooklyn is super beautiful. It can be sketchy though.
M

I second the River Cafe!

imho: the horse and carriage through central park isn't all that romantic. the chauffeur is usually a dude wearing a tracksuit talking on his bluetooth the whole time. tourist trap.
M

I think it's pretty romantic in that cheesy way. It would be a cute laugh. But the smell of the horse would drive me nuts. And if the horse shits, it's pretty gross. I rather in the back of a cab to be honest. That would be my fantasy. Back of a dirty taxi, Indian music blaring down the West Side Highway, heading to a great dinner after.
S

Eloping and getting married in NYC's City Hall would be just as cheap and convenient as Las Vegas if you felt like being spontaneous and tying the knot and just making it official.


^My sister's getting married on Labour Day weekend. I researched the above and told her she could have saved a fortunate for her wedding. LOL
B

i recommend either the brooklyn bridge at sunset, looking back over the manhattan skyline, or the rooftop of the Met (i think it is only open in the evenings on Friday or Saturday).

but be forewarned, you're not going to find a secluded spot in NYC. it's rammed with people, everywhere, all the time. that is part of its charm.

Ha. I doubt HE would care about Tiffany's but you never know. He doesn't seem like the type.
M

The Met is a great idea. *swoon*
M

Are we congratulating him because he has the courage to propose, cause she hasn't said yes yet....
M

HE hasn't said yes yet.