His name was Prince, but he was a King

Not yet confirmed. Hope its not true.

I am reading it's confirmed.
I

The rest of the internet agrees with you. RIP

How many great artsits have we lost this year...like WTF!

RIP
i remember getting his tape from mac's milk. they used to have a deal where if you got a giant slushy you could buy a tape for like 14.99. also got a zz top tape the same way

i am thankful to have seen him perform live. he was one of the greatest of all time.

i wonder what the circumstances were. 57 seems far too young to die of natural causes and he looked healthy.
K

Gutted, I really wanted to get tickets for the piano performance and when we couldn't we decided next time he's in town we would see him live.

RIP. Definitely sad news, especially because I really wanted to see him when he played 2 shows here last month on Good Friday (March 25). Unfortunately, I didn't go because I was bitching in the "Nobody Cares" thread his ticket prices were too expensive. 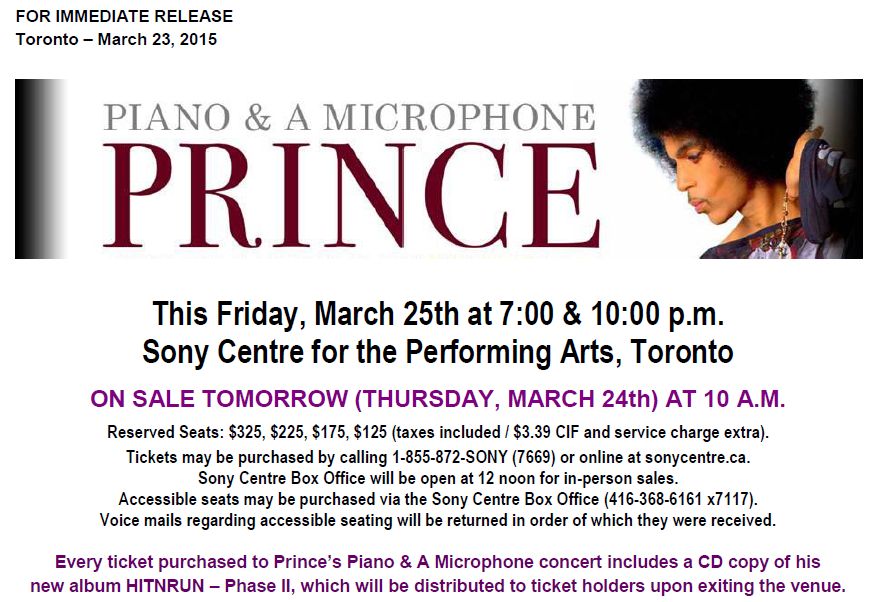 I've seen lots of concerts in my life. However, I regret to say I haven't seen the "two greats" Michael Jackson and Prince live in a concert.

Favorite Prince song that I often sing when I think nobody is around is "Raspberry Beret". LOL

Probably the closest these 2 iconic music legends Michael Jackson and Prince came to sharing a stage was back in 1983.

Bloor Cinemas is showing Purple Rain this saturday at 10 pm.
if i weren't going to Krafty Kuts, i'd be there in a heartbeat.
S

The Kingdom Hall in the sky

This is the saddest year in the history of awesome guitar players.

So a child molester, a short guy deceptively great at basketball and a wife beater walk into a bar...
K

Littlest Hobo said:
So a child molester, a short guy deceptively great at basketball and a wife beater walk into a bar...
Click to expand...

kyfe said:
according to an aquaintance of mine he was really good a b-ball and would never let him win

I was referring to Charlie Murphy skit where Chappelle plays Prince.

Ping Pong? I love it.

at least now I know what it sounds like

been working on that one
J

I can watch and listen to this guitar solo over and over.....simply one of the greatest guitar players of all time.

Sorry, I don't have a clip or anything but I remember Jimmy Fallon (my least favorite late night talk show host because he kisses ass too much to A-list celebrities) was telling his amazing Ping Pong match story with Prince to Jay Leno during an interview
S

RumRogerz said:
been working on that one
Click to expand...