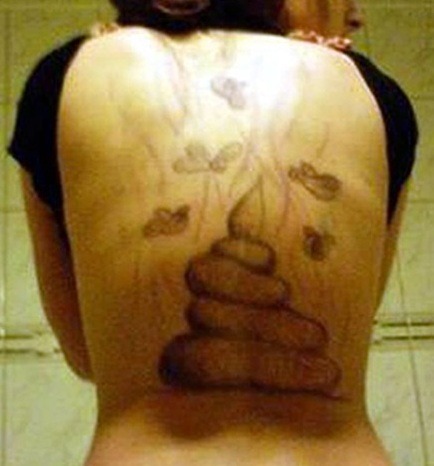 Tattoo artist Ryan Fitzgerald from Dayton, OH was hit with a $100,000 lawsuit last week by his ex-girlfriend Rossie Brovent. She claims that her boyfriend was supposed to tattoo a scene from Narnia on her back but instead tattooed an image of a pile of excrement with flies buzzing around it.

Apparently, Ryan found out that Rossie had cheated with a long-time friend of his, but instead of confronting her about it he acted like everything was normal and hatched a plan for revenge. Originally, Rossie tried to have Ryan charged with assault, but the ingenious tattoo artist had covered his bases by plying Rossie with wine and tequila shots and getting her to sign a consent form that stated the design was “at the artist’s discretion.”

No word from Rossie on whether the illicit night of passion with Ryan’s friend was worth it. Moral of the story? Never cheat on a tattoo artist.

Wow. Thats a hell of a grudge. Damn.
T

voyage of the dawn tread marks

Staff member
Her only hope is if she becomes a Zombie, as tattoos aren't all that noticeable on zombies.

Or she could hire a team of amazing tattoo artists to turn the flies into bees and the poo into a giant beehive.

She would look like a burn victim after laser removal of that tattoo.
C

I guess she will be asking for her shit back...
O

sounds like it's a hoax, for her sake I hope so


Rossie also allegedly tried to have her former boyfriend charged with assault, however, internet users are not convinced by the story.

After the image of the tattoo went viral, it emerged that the picture appears to have been sourced from Polish social network site Nasza-klasa.

Some suspicious bloggers also dug deeper to dispel the myth by tracking down court records.

It now appears that no such civil complaint was ever filed by anyone of the name Brovent, or that such a person even exists in Dayton.

US website, The Smoking Gun, also reported that James Druber, administrator of the Montgomery County Common Pleas Court, had heard nothing about the purported tattoo lawsuit.

The report also adds that “records for Dayton and Montgomery County show no evidence that “Fitzjerald” (or “Fitzgerald”) has been licensed as a tattoo parlor operator or employee, according to Alan Pierce, an official with the Public Health department.”

she shouldnt be too upset, ive seen alot of shittier tattoos than that
T

videotronic said:
he really shit all over her chances to wear a bikini this summer
Click to expand...

cosmosuave said:
I guess she will be asking for her shit back...
Click to expand...

LikeASweet said:
she shouldnt be too upset, ive seen alot of shittier tattoos than that
Click to expand...

Staff member
All she really needs is Dermablend and a team of makeup artists to follow her around for the rest of her life...

Good while it lasted..

Hoax is full of poop.

Too good to be true. Oh well.