Poliça with Marijuana Deathsquads at the Mod Club; Friday November 1, 2013

Justin Vernon, frontman of Bon Iver, in early 2012 declared Poliça as the best band he's ever heard. Poliça played Sasquatch! 2012, which I was privy to attending, however had yet to hear the band. My comment on a quick listen of the band was that they were Vernon's favourite band, clearly that didn't help my quick judgement.

It was about a year later that I decided to check out the band after hearing "Wandering Star" on this Daytrotter session. I've been hooked ever since and have been fortunate enough to have seen them play three times in 2013 alone.

This Toronto gig marked the third time seeing them and the band's first Toronto appearance. The band brought out a surprisingly large crowd to the Mod Club, nowhere near selling out, but still a slightly uncomfortably packed venue. My pal Patrick and I managed to sneak to the front to get a very close view of both acts. My move forward initially to see what exactly Marijuana Deathsquads were up to. Comprised of two drummers and three guys on lap tops with one of them singing each tune. Most vocals were put through some kind of manipulator to make it sound like a little boy. I didn't really enjoy the childlike vocals over the very ornate, aggressive music. I did however love the use of two drummers, for music that is often left unseen or played and then manipulated, the two live drummers made the performance all the more real. Their music has been given the title "hardcore," "noise," and "electronic"... Nothing I'd jump out for by title. The band was started by Gayngs/Poliça contributor Ryan Olson, proving that the Minnesota music scene is only getting stronger.

Poliça's set dazzled as frontwoman Channy Leaneagh enticed the audience with her minimalist, sexy dance moves. Her skinny frame and modest appearance made the scandalously slit tight pants she wore a little less promiscuous. I was very unfortunate to have a group of slightly intoxicated girls behind expressing their adoration for Channy and her clothing choices from the first few to last minutes. 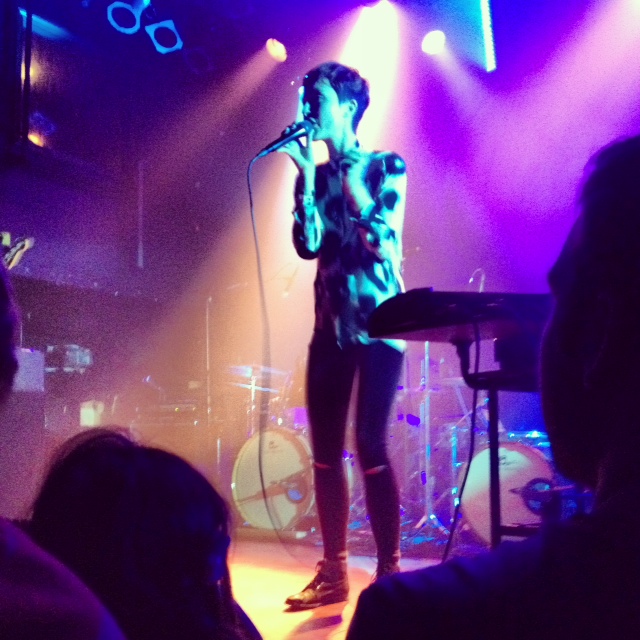 I always found Poliça's instrument arrangement to be a bit odd. Like Marijuana Deathsquads, they've got two guys on drums - Ben Ivascu drums for both bands, a bassist, and Leaneagh on vocals. The rest of their music is recorded and played.

For some reason, this time more than the others, it felt like a karaoke jam. With that being said, a very top notch karaoke session. Leaneagh's vocals are strong and nearly impossible to copy. I told my friend at the end of the show that I was really happy the sartorial drunks behind us kept their singing to a minimum, as it's mega unlikely they would ever be able to replicate Leaneagh's vocals.

The gig was in support of the band's new album Shulamith which I bought and gave a few full album spins of. After strong consideration, I felt nothing for the album. I however loved how the songs came off live, giving me reason to listen to their new disc again.

The band drew most of their set from the new album, however played Give You The Ghost bangers "Amongster," "Darkstar," "Lay Your Cards Out," and very stripped down version of "Wandering Star" featuring only Leaneagh's vocals and the very recognizable bassline. It came off sounding very jazzy, leaving me very unfulfilled. The song however served as the lead to a cover of Lesley Gore's "You Don't Own Me." Someone from the Mod Club gig brilliantly captured it.

The 1964 original performed by Lesley Gore.


I was very surprised to find the band closed on a slower tune off of the new album and neglected to play "Leading to Death," a tune I've been incredibly lucky to hear live before. Despite this, Toronto gave them an extremely warm welcome and I wouldn't be surprised to see them tour Toronto again in the very near future.

have you done any reviews for any dj/club/electronic events?
F

Hey there, sorry for the delay.

Nope, I've tried getting into electronic-type music, but I just can't relate.