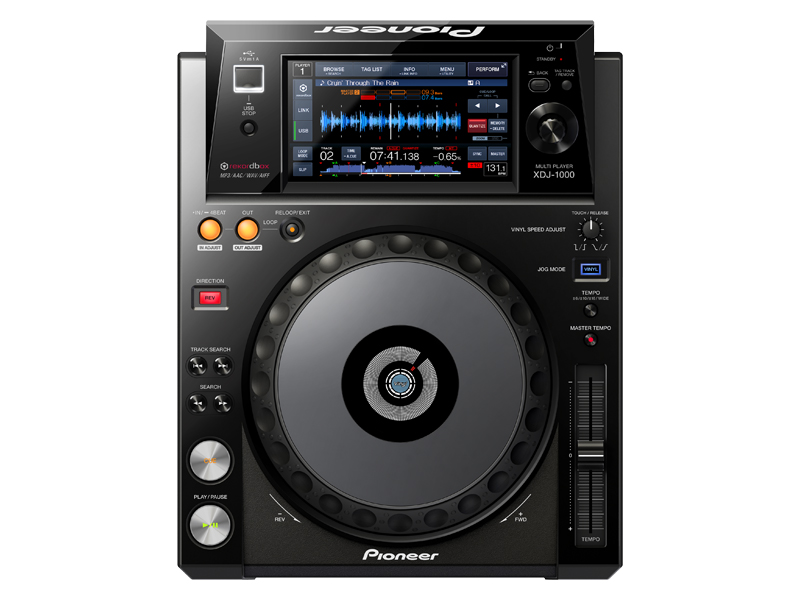 
Pioneer has sneakily debuted a brand new media player for DJs – the XDJ-1000 – that takes the CD out of the CDJ. Instead, it’s purely designed for Rekordbox, USB drive, and HID control purposes – finally bringing to the masses a relatively affordable solution for digital playback in a professional CDJ-style design.


TOUCH INSTEAD OF HARDWARE

The unit has the exact same form factor as the CDJ-2000 Nexus units – same dimensions and control layout – although keen-eyed CDJ users will note the lack of cuepoint buttons, touch strip for searching, etc.

Instead, the XDJ-1000 has a 7 inch touchscreen – which allows control for setting loops, beat sync, cuing, slip mode, and a new function, Beat Jump / Loop Move (a basic function that Traktor has held alone in the digital DJ world.

There’s also now a QWERTY-style keyboard for searching through your tracks- way easier than just rummaging around your folders.

Also of interest is a new automatic import of player settings (things like Quantize and Master Tempo) from whatever you have them set at in Rekordbox – and a color-coding for playlists that actually corresponds to an LED that lights up around the USB stick plugged in.

Pioneer’s website lists the suggested retail price as being $999 – which implies we might see even lower prices as the minimum advertised price. We’ve reached out to Pioneer to find out if this is an expected street price, but no answer yet.

THE FIRST OF MANY?

Pioneer has a very interesting note on their video description:

“… the XDJ-1000: the first in a new line-up of digitally focused, USB-only, rekordbox™-ready players.”

This makes it pretty clear that Pioneer isn’t stopping here – and we’ll see other versions of this CD-free XDJ line in the coming months. Will we go up to a higher-featured XDJ-2000, or perhaps we’ll drop down into serious budget territory and make feature-slimmed XDJ-400s that are easy for any DJ to add too their setup?

SERATO AND REKORDBOX ONLY?

Something strange about the press release stuck out to us – a hint that perhaps Traktor HID mode might not be enabled when the product launches:

With Native Instruments very focused on selling their own screen-laden Kontrol S8, it wouldn’t be a surprise if there’s some feet-dragging on both sides to get Traktor HID integration.

Read more about the XDJ-1000 on Pioneer’s site here

was going to post this in my previous Pioneer thread but I thought nobody cares anymore...
http://www.tribemagazine.com/board/tribe-main-forum/170264-pioneer-sell-dj-business.html

Affordable when they are compared to Pioneer CDJs. Not so much when you look at the fact you need two of them and a mixer and without CDs you are comparing them to Controllers on the market.

Also if the only major difference from the CDJ 2000 is the removal of the CD drive then it exposes how overpriced their CDJs are.
C

Wiseman said:
Affordable when they are compared to Pioneer CDJs. Not so much when you look at the fact you need two of them and a mixer and without CDs you are comparing them to Controllers on the market.
Click to expand...

One problem with this argument. Let's say you want to mix using a hardware mixer.

A controller
A laptop
A sound card
DJ software
C

What would make this player better:

Two sets of audio outputs
Motorized pitch control fader
Ability to play two tracks at once using one player by switching back and forth between "decks". Screen would change and fader would auto adjust to where it was set.

This would allow someone to get into mixing with only one controller.

I just don't really get who this is for:

Not home users who would get pretty much the same functionality with a controller even built by Pioneer for the price of one of these things.

Not the club who very much still need the CD functionality and should be able to afford 2000s.

I can only think of those who are still rockin 2 techs and a mixer and want home access to the control surface.
V

coleridge said:
What would make this player better:

Two sets of audio outputs
Motorized pitch control fader
Ability to play two tracks at once using one player by switching back and forth between "decks". Screen would change and fader would auto adjust to where it was set.

This would allow someone to get into mixing with only one controller.
Click to expand...

and would result in pioneer selling 1/2 as many lol.

funny...i was at a function with the director of supply chain for pioneer a few months ago and he told me they'd be discontinuing it. i was slightly drunk and forgot about the conversation until this post. ha.
B

Ahhh..coming to terms with the fact that I collect and appreciate music and will never be a DJ helps when gear like this comes out. While neat..I'm not excited by it.

Staff member
An essential too for colored LED and blinking light DJs.

I like it. Nobody wants to bring their CD's out to the club. People bring their laptop and use their controller while routing it to their mixer OR those who enjoy the CDJ experience can can just plug in their USB.

Do you know how many times I've been out playing and accidentally touched the CDJs in front of me only to remember that's not the platform I'm using?

I think they are cool. I would love to have a usb full of beats and be able to give it a whirl on these. All my years on final scratch has made me rely on looking at waveforms. Helps setting me up for a nice mix. I would give them a go, except for the price.
You must log in or register to reply here.
Share:
Twitter Reddit Pinterest Tumblr WhatsApp Email Share Link
Top