Phosphorescent and Caveman at the Mod Club; Saturday February 1, 2014

My sweet friend Natalie got me a ticket to this gig for my birthday. I was sweating its approach because a 2013 favourite band called Night Beds was to play with Lord Huron that night as well. Thankfully after Natalie had bought me a ticket for Phosphorescent, the Lord Huron show sold out and shortly after Night Beds flopped off of the tour date. 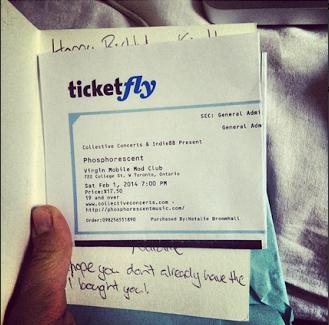 With nothing else to do Saturday, we arrived early at 7:30pm to catch Caveman a few songs into their set. I was amazed to see what brilliant presence the band had with glorified percussion and very strong vocals. I was surprised to see how old most, if not all, the band was.

Phosphorescent were absolutely stunning. The band, comprised of six players, with double keys, double percussion, the band made full music. So full, that when they left, Matthew Houck seemed to need them. Houck, who before Phosphorescent played under the name Fillup Shack, stumbled through a solo version of “Muchcacho’s Tune,” which he regarded as the first song he wrote of the album. His peddles were giving him trouble throughout the performance of the song, so it took him a four or five tries until he just gave up and played it to the sounds that the peddles would let him do.

“Muchacho’s Tune” showcases what Phosphorescent is best for – the confessional tune. Like his country and predecessor, and maybe even idol, Houck tells it like it is often singing about drugs, drinking, and the good times. In 2009, Phosphorescent put out an album called To Willie, which was comprised of covers of Willie Nelson tunes. The opening track is the tune “Reasons to Quit,” which reminds me a ton of “Muchacho’s Tune” in its bitter honesty. I first heard “Reasons to Quit” thanks to Canadian gems Julie Doiron and Will Kidman. I’ll let you decide who did it best:

Houck’s an Alabama native, which explains his sweet country sound. Somehow, he gained serious fame in the indie scene and mild fame through the use of his tunes in movies… Especially the tune “Nothing Was Stolen (Love Me Foolishly).” I was surprised to see how country he sounded at this particular show. Perhaps it was his all white get up, including a cowboy button up white shirt and cowboy hat.

I had the funny realization that I have actually seen Phosphorescent two times, but never in Toronto. This was my very first Phosphorescent gig in my own hometown. In 2011, I saw him play in a black tank top at Coachella and just last September he dazzled at Detroit’s Laneway Music Festival. I remember grabbing a bag of pickle-flavoured chips and a cider while he started to play “Song for Zuma,” probably the loveliest song on his new album.

I thoroughly enjoyed the gig, as it was as lovely as they get. I found it a bit flat at times, and with very little banter or diversity in the sounds of songs, he lost my attention here and there. Overall, a beautiful way to spend the beginning of a fun Saturday evening, as the show ended before 10pm. High fives, old people! 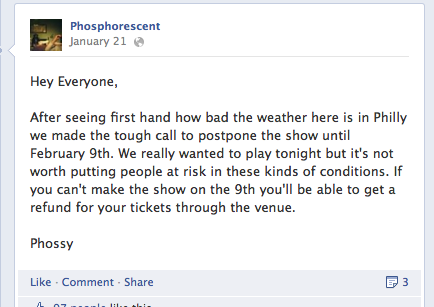