NEW YORK — A sexually frustrated man who killed three women in a Pennsylvania health club, then himself, blogged his preparations -- with the final chilling entry announcing the "big day," police said Wednesday.

The killer, who late Tuesday burst into the LA Fitness Gym in Bridgeville, near Pittsburgh, and sprayed 36 bullets, apparently wrote the blog on a personal web page starting last November.

On the eve of the killings, he wrote: "Took off today, Monday, and tomorrow to practice my routine and make sure it is well polished.... Tomorrow is the big day."

After twice visiting the gym earlier in the day, Sodini entered the Latin dance class, turned off the lights and opened fire, Moffatt said in a nationally televised press conference.

Sodini carried four handguns, three of which were fired: two 9mm semi-automatics and a .45 caliber revolver he used to commit suicide. A total of 12 people were hit.

"He shot at least 36 times. He had clips of ammunition that held 30 rounds," Moffatt said, pointing out that the military-style ammunition had been legal since 2004, when a ban expired.

The blog -- which Moffatt said was being treated as genuine, and which was quickly pulled off the Internet -- reveals the sinister, often banal mind of a man crippled by sexual frustration, anger at women, and depression.

A picture of Sodini, 48, attached to the blog shows a lean, white male with slightly greying hair and wearing a smart blue shirt.

Moffatt said the blog clearly showed "the hatred in him" and that computer sleuths were looking into whether anyone saw the blog -- and if so, why they didn't report.

In the blog, Sodini writes as far back as November 5, 2008, that he "planned to do this in the summer" but decided to see the result of the presidential election won by President Barack Obama.

In December, he again wrote that he'd "planned to do this already" and sets January 6 as the new date.

Less than two hours before the appointed time on that day, he apparently writes: "I wish life could be better for all and the crazy world can somehow run smoother. I wish I had answers. Bye."

But the next entry describes him pulling out at the last minute: "It is 8:45PM: I chickened out! Shit! I brought the loaded guns, everything. Hell!"

Throughout nine months of rambling entries Sodini reveals his fixation on rejections from women and his extreme sexual frustration.

"Last time I slept all night with a girlfriend it was 1982. Proof I am a total malfunction. Girls and women don't even give me a second look ANYWHERE. There is something BLATANTLY wrong with me."

He is angry at a brother whom he describes as a bully and what he says was his distant relationship with his father. In April he also blogs about his worries over being laid off at work, where the recession is starting to make an impact.

Similar complaints were recorded by Sodini in a message found on him after the carnage, Moffatt said.

Ironically, the blogger writes that going to the gym helped him relieve his psychological problems.

"My anger and rage is largely gone since I began lifting weights," he wrote in December last year.

But those positive feelings are fleeting and the blogger appears to be set on preparing his destructive end.

"What is it like to be dead? I always think I am forgetting something, that's one reason I postponed," he wrote. "In this case, I cannot make a return trip!"

In the last entry, dated August 3, he describes alarm at meeting a happy neighbor, who he worries will distract him from the murders.

"I need to remain focused and absorbed COMPLETELY."

His last words on the blog: "Death lives!"

Blog got taken down but here's the google cache:

Haven't these assholes heard of Craigslist or Plentyof fish? How hard can it be to get laid?
B

i read his blog in it's entirety earlier today.
it was really sad, but moreso just because he didn't seem totally batshit insane, just incredibly lonely, bored and depressed.
M

Dan Savage's column last week was letters from a 60 year old virgin and a 45 and 26 year old who have only had sex with prostitutes. Lets hope that they don't see this news story and copycat.

In any case it is a result of these guys not having the necessary social skills to attract women.
Regardless Booty, anyone who kills other people like this is surely insane.

If the world had more drunk sluts these things wouldnt happen.
I would like to see his picture.
Last edited: Aug 5, 2009 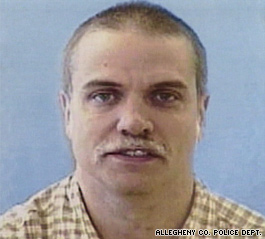 ^for really thats him?
ahh hes not that bad, he should of been able to get laid, should of lost the moustache tho. looks like an army guy.
what a shame.
S

Thanks for posting the link to his blog. What a lonely, sad man.

Funny how he never contemplates the reprecussions of his exit plan for all of the people and the families of the people he would undoubtedly kill. He didn't seem vengeful or diabolical though in any of his entries. All of his anger was turned inwards. His loneliness completely isolated him.

I wonder how many people went though their 20's, 30's and 40's void of any meaningful companionship. What would that do to someone?

I wonder how many killers and terrorists in the future will have blogs, twitter accounts, and facebook updates we can all read after their deaths.
S

Booty Bits said:
i read his blog in it's entirety earlier today.
it was really sad, but moreso just because he didn't seem totally batshit insane, just incredibly lonely, bored and depressed.
Click to expand...

I just read it all too, and oddly enough, it also left me feeling sad. Can't help but feel for this guy. Not that it excuses his actions by any means. I think a lot of his isolation was self-induced. I'm sure there was a social awkwardness that wasn't portrayed in his blog. Something to deter people from wanting to get close to him.

*edit* was also surprized at how many sympathetic comments towards him were left on ABC NEWS' website. http://abcnews.go.com/US/story?id=8258001&page=1E
Last edited: Aug 5, 2009

Dude was a walking cliche.

Are you actually religious or is that just for effect?
S

More info being leaked about this guy...
http://www.truecrimereport.com/
K

"Sodini carried four handguns, three of which were fired: two 9mm semi-automatics and a .45 caliber revolver he used to commit suicide. "He shot at least 36 times. He had clips of ammunition that held 30 rounds," Moffatt said, pointing out that the military-style ammunition had been legal since 2004, when a ban expired."

SmoothOperator said:
More info being leaked about this guy...
http://www.truecrimereport.com/
Click to expand...

Maui said:
Are you actually religious or is that just for effect?
Click to expand...

society rewards aggression. what are we expecting from weak, overly-sensitive people when they start to get angry and depressed?

So how long before someone live blogs their own massacre?
S

that makes me wonder, if you were operating a camera on the set of letterman, and all of a sudden he pulled out an m-16 and sprayed the audience, would you continue filming and panning around following him around the set?
D

Brandon said:
So how long before someone live blogs their own massacre?
Click to expand...

i was thinking the same thing; dude could've tweeted

Sad but where are all the people denouncing his actions? He killed 3 women.

Yeah I pity the guy that he didn't off himself 20 years prior and without taking out guiltless victims with him.

agreed, he had more going on than not getting his joint worked on

I'm also a bit surprised how everyone (media, the blogosphere etc) is willing to take the journals at total face value and totally accurate of this guy's life.
R

This article sums up my point of view and provides some context to the story.

Why is it that this misogynist complained that his father sucked ass but didn't go around killing other men?
S

rubytuesday said:
Sad but where are all the people denouncing his actions? He killed 3 women.
Click to expand...

I'm with you. To be honest, even if he had killed 3 men, he killed 3 other people. If you're depressed, just do like the east asians and fall on your sword. Or you could try and get help, sadly help isn't free in the U.S.

Regardless, there's no need to take anyone with you either way. Then you're a murderer.
W

rubytuesday said:
This article sums up my point of view and provides some context to the story.

Why is it that this misogynist complained that his father sucked ass but didn't go around killing other men?
Click to expand...